The Anvil Apex vise is a relatively new entrant into the fly tying market, but has gotten quite a bit of attention for it's value, design and versatility.

Anvil offers two fly tying vises, the Anvil Apex and the Anvil Atlas, a nicely featured true rotary vise. The vises are made by Anvil Industries, USA in Columbus, Indiana, along with a line of fly tying scissors and other fly tying accessories.

The Apex is a compact, lightweight vise that is suitable as a bench vise or as a travel vise. It is sold with both a pedestal base and a c-clamp, and works well either way. The vise is an in-line rotary design, allowing the user to rotate the collet assembly on its own axis, in order to view the fly from any side while tying. It is possible to to use the in-line rotary function for rotary tying if the vise jaw assembly is set to horizontal, but because of the lack of offset that would be found in a true rotary design, the fly will orbit the shaft axis, making it a little less suitable for precision rotary work. The vise will handle hooks from 7/0 down to size 32 with its innovative jaw design. In my tests, it does great on the mid-sized to tiny hooks, and an adequate job on larger hooks, though I would say it lacks the extraordinary holding power of my Regal or HMH vises, American competitors with a solid reputation for their jaw strength and fierce gripping power. It's hard to find anything with such a wide range of hook sizes, and at such a very reasonable price, however.

You do need to take care in mounting the hook in the jaws to set the hooks for enough into the jaw gape. If you get too close to the edge, it is possible to spit the hook from the jaws, since they can close unevenly, and when the hook is shot from the jaws is makes a dangerous projectile if it hits someone, a hidden threat if it is not found, and besides, it can chip or break the jaws. I had one case where I got a size 32 hook too close to the edge, and with a sharp ping, the hook vanished. Luckily the jaws did not chip, probably only because they had very little distance to close because of the tiny hook thickness. The jaws do have two grooves to help set hooks of smaller and larger sizes, which allows for greater holding power and less likelihood of the jaws spitting a hook.

My Apex has an extremely smooth rotary action, nearly as smooth as my HMH Spartan vise, which is a vise against which I think it needs to be compared. The HMH is considered by many to be the best vise on the market, though I would not be so dogmatic, since the specific type of vise may not satisfy everyone. Still, as someone who owns and uses both vises, I can give you a pretty good picture of what the comparison looks like. The HMH is a heavier vise on a heavier base, and is more sturdily built. It is reasonable to think that the HMH vise is one which could be passed down to your children and grandchildren so long as it is reasonably cared for. While the Anvil is an excellent vise, I doubt that it will hold up to the level of use that the HMH will. Also, the HMH is more adaptable, with three interchangeable jaws available which specialize in large, midsized or tiny hooks, while the Anvil uses a single jaw to accommodate a large range of hooks. This makes the Anvil more difficult in my experience to set for various sizes accurately, and as mentioned before, I don't feel the holding power on the very large hooks is as good as afforded by the HMH with its magnum jaws installed. Also the HMH can be converted directly to an in-line rotary tube vise, and is one of the finest in the world when it is. If you wish to tie tube flies with the Anvil, you need a clamp-in tube fly adapter. A number of different ones are available, (including two from HMH.)

Is the Anvil Apex a good alternative to the heavier duty HMH vise? I think so, depending on your budget. The Anvil sells for about a hundred dollars, while the HMH will cost you about double that, or more than triple the price if you get the HMH with all three jaws and both the pedestal base and the c-clamp. Comparing the Anvil to vises closer to its own price range, we would want to look at the Thompson Original Pro vise with C-clamp, or the Thompson Pro II vise with the pedestal base, selling for about $80. The anvil has the ability to work well with the smallest hooks with its existing jaw, while you need to purchase an additional jaw for the Thompson for very small hooks, and the Thompson comes with only the clamp or pedestal base, not both, making the Anvil cheaper again if you accessorize both vises equally. Additionally, there are other vises in the price range such as the Regal Inex vise, the Peak non-rotary vise, and the Renzetti Apprentice vise.

Is the Anvil Apex vise worth the price? I have had mine for about four years, and I absolutely love the vise. It is small and easy to carry, it is nicely machined, and the in-line rotary is a great asset when you are tying and want to see the other side or apply cement or eyes on the far side of a fly without removing it from the vise. It has held up well, and shows no significant wear so far. I recommend taking a look to see if it is the right vise for your budget. 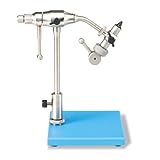