Joggling Is A Real Sport That Combines Running With Juggling

It takes athletic skill and ability to succeed in the world of track and field. A participant must excel at running, jumping and more. There is a sport that combines the athletic ability of running track with juggling. It is called joggling. This is a sport that holds competitions around the world. There are even joggling championship competitions that take place annually. Participants are able to be ranked and win medals. It is not a new sport. Joggling has been around for over 40 years.

The sport of joggling was started in the late 1970s by a man named Bill Giduz. It all began by chance after a track practice in 1975. Giduz brought his juggling balls to track practice at North Carolina State University. He intended to practice his juggling after the practice was over. He doesn't know why, but that day he decided to run around the track as he juggled. Giduz discovered that juggling three balls was a pattern. It was a perfect match to a number of different running cadences he knew. Doing this also went well with the natural motion of his arms as he ran. At the end of the day, he called his new creation joggling. In 1976 the International Jugglers Association (IJA) was in need of an editor for their newsletter. Bill Giduz took the position. In 1979, Giduz saw a press release from a juggling instructor claiming he had juggled for an entire 10k race. He decided to challenge all jugglers to organize races for the 1980 IJA festival being held at Fargo, North Dakota. The sport of joggling became a reality.

Michal Kapral is a Canadian, who set a joggling world record in 2007 by juggling three objects while running a marathon. His marathon time was 2:50:12. He also has the world record time for joggling a 10K. His time was 1:20:40. The world record for joggling three objects while running backward for a marathon is held by Joe Salter of the United States. He did this during September of 2013 at the Quad Cities Marathon. His time was 5:51:25. The record for the joggling 1-mile relay is held by Team Exerball from the United States. The team members were Owen Morse, Albert Lucas, Tuey Wilson and Jon Wee. The record happened during July of 1990 at the International Joggling Championships in Los Angeles. The winning time was 3:57:38 minutes.

There are many women who hold joggling world records. Dana Guglielmo currently holds the 5k joggling record with a time of 20:40 minutes. She achieved this goal in spite of the fact that Guglielmo has suffered from inflammatory arthritis since she was a teenager. Guglielmo was a member of the track team at High School as well as the University of Richmond. One day she was watching television and saw someone joggling an entire marathon race. She was instantly attracted to the sport. Guglielmo had to try it. Running was something she knew would not be a problem. Guglielmo began working on her juggling and picked it up quickly. During college, she would juggle between track meets. An opportunity came for her to attempt to break the 5K race for joggling. She won the race and broke the record. Guglielmo shattered the previous record by seven minutes.

A joggler must have at least three balls in motion as they run. They must maintain a juggling pattern during the entire race. If a juggled item is dropped during the race, the joggler must return to the spot where the item was dropped. The item can then be picked up. The joggler then resumes running and juggling until they cross the finish line. The clock continues to run as a joggler pick up any item they dropped.

The most common items uses during joggling competition are juggling balls. There have been people who have completed races using juggling clubs. It is understood that any set of three types of objects can be juggled. Jogglers who compete in long-distance races seem to prefer bean bags that are the size of a hand palm and filled with birdseed. These bean bags are light enough to handle easily during a long distance run. They also have enough weight to not be affected by the wind. Jogglers will juggle their chosen items using a method of three-ball cascade patterns. This is considered to be the most efficient method and requires the least amount of energy. Jogglers will try to get into a pattern of juggling three objects that compliment their arm movements. They will try to maintain this pace during the entire race.

Those who succeed at joggling are talented athletes. It is a special physical and mental challenge. During the race, a joggler must ignore any pain they are experiencing, other runners, the running surface and maintain focus. They have to keep their juggling motion going fluid and simple. A joggler cannot give into any type of distraction. As with all races, fatigue will eventually begin to be felt by them. This makes it an increasing challenge to no drop the juggled items and maintains the juggling motion. joggling during a race is a unique experience. Participants experience a high level of cheering and energy from the crowds watching them. People yell encouragement, children point and everyone smiles.

There are many health benefits to juggling and running distances separately. When they are combined, the benefits increase. Anyone can practice and develop the skills necessary to juggle while running. People can experience weight loss, increased bone health as well as improved heart health and more from joggling. The focus and attention necessary to juggle while running helps to increase focus and mental discipline. joggling can increase the gray matter inside a person's brain. This could significantly decrease the chance of developing Alzheimer's disease as well as other age-related health conditions.. This is also a good way for a person to remove their mind from the problems affecting them. Since joggling requires such concentration, it is considered by many to be a form of stress relief. This sport is also able to increase the level of control and range of motion a person has in their arms and shoulders. Juggling exercises muscles that are not often used by people during their daily tasks. 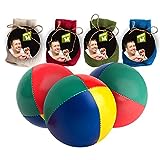