If One Works, Why Not Two!

The gold bead gets the fishing fly to sink quickly where it can bounce along the bottom as the current pushes it down stream.

Do give this fishing a fly a try. It is a simple fishing fly and can be completed quickly with minimal material and effort! The following is the material list for the COAF San Juan Worm Ball: 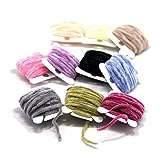 Thread the 1/8" Gold Bead on the Size 10 Streamer Hook and set it in the fly tying vise.

Starting at the middle of the hook shank begin laying a base of thread.

Wrap along the hook shank and half-way down the hook bend.

Once a base is formed, stop at the middle of the hook shank.

Step 1 is completed and should look like the picture in the sidebar. Next, cut the Chenille so you have two 3" length pieces.

Taking one of the pieces, tie it on to the hook shank .

This should be the same point where you stopped in Step 1.

Leave about 1" of Chenille as pictured in the sidebar.

Note: In the sidebar, select the thumbnail for the picture with the caption - "Setting the First Worm" In Step 3, two loops will be formed to simulate a worm twisting in the current. Do this by...

Note: Refer to the pictures in the sidebar for more details; use the thumbnails to review each picture. Almost done.... In Step 4, the second worm will be set on the hook shank, and only one loop will be formed. Do this by...

Note: If additional loops are desired, the same steps as described in Step 3 remain applicable. Also, refer to the pictures in the sidebar for more details; use the thumbnails to review each picture.

Step 5 (and the final step) calls for a little heat to form the worm ends.

Be extremely careful not to get it too close to the Chenille, else the fishing fly will be ruined!

To form the worm ends, hold the butane lighter well away from the fishing fly and light it.

Then, bring the lighter under the fishing fly, starting about a foot away from the worm.

As soon as the tag end of the Chenille shrinks to a blunt point, move it quickly away. Repeat until all worm ends are formed.

Once all worm ends are formed, the COAF San Juan Worm Ball is done and ready to fish!

Note: If uncertain how much heat to apply when forming the worm ends, practice on a scrap piece of chenille. Also, if concerned about ruining the fishing fly in Step 5, the worm ends can be formed as part of Step 2 after the two pieces of chenille are cut to 3" lengths. When fishing the COAF San Juan Worm Ball, here are a few suggestions from the COAF Field Team!

What color San Juan Worm has worked best fro you when fishing?