The Ten Worst Wrestling Haircuts of ALL TIME!

I've come across many cool dudes in my days writing for Lords of Pain. One of those cool dudes is Pen, one of the two coolest Canadians I know and a dude who has seen every Friday the 13th film at least twenty times (I might be exaggerating there). Anyways, yesterday, I was discussing to him potential topics for a column, while also venting about how Jack Evans saved his terrible long hair look at last night's Verano de Escandalo show (on the plus side, Angelico kept his hair too. Still the man!). Being the cool dude that he is, Pen suggested I do a column on the ten worst haircuts in wrestling history, and then dedicate it to him. Thus, this one is for you Pen! Sit back, open up a Pepsi, turn down the Stanley Cup Finals and get excited. ON WITH THE SHOW!!!

The Ten Worst Wrestling Haircuts of ALL TIME!!!

What do you know, Jack Evans and his grunge hair are beaten out by his former partner's tragic style. Who knew?! Look, it's not like the Hart Foundation is known for their great haircuts over the years. Remember Owen and his bowl/Farah esq hair that he rocked at times during the 90s? In the end though, Teddy takes the cake; he looks like he's trying to cosplay for one of the Cool Runnings characters. Teddy, you're white dude. Shave the head and stick to nailing those sick shooting star presses from here on in.

In the words of Pen, frosted tips are terrible on everyone who has ever had them (apologies to all my readers with frosted tips). This is certainly true here for Michael Cole, who rocked the tips during his run as Smackdown commentator a decade ago, before transitioning to bland when he went to RAW. Poor Michael; he just can't do anything right can he? What I'll always remember about the tips was that it totally made him look like the dad who tries to be cool, but instead comes across like the biggest tool since Riley Finn. Coincidentally, Cole still does that to this day, just minus the frosted tips. I miss Tony Schiavone.

I'll admit, there's sometimes Eddie's mullet wasn't that bad. On second thought, no, it was always bad. So bad, that I'm pretty sure part of the reason WWE punished Eddie in 2004 was because he finally lost the mullet a year previously. Coincidence? I think not. Oh well, it was at least a lovable part of Eddie's look after awhile. Which was a stark contrast to how well all felt about it at the beginning. Remember that mullet when he first came into WCW? It was like Treebeard was popping out of his head.

Ask a hundred people about Brian Knobs and Jerry Sags, and you'll probably get a hundred different opinions. I don't know whether the Nasty Boys were good wrestlers or not. All I know is they were entertaining, and their hair made this punk rocker want to sob. Come on guys. That style doesn't work on dudes a hundred pounds lighter than you. What made you think it would look good on you, a couple of dudes who look like they're too old to be at the Bad Religion concert? How much you want to be that Hulk Hogan had these two keep their hair like this, just to make his cut look less horrifying? Never mind, not even watching The Wicker Man remake one hundred times before looking at Hogan's hair can have that effect.

Here's a dude that just can't win. Sheamus is, to me, one of the most underrated in ring performers alive today. Put him in the ring with anyone, and he's Jimi at Monterey Pop (okay, maybe not that good, but you get my point). The problem is that the poor dude just isn't interesting, and hasn't been since WWE thought it was a good idea to have Daniel Bryan lose to him in eighteen seconds at Wrestlemania 28. The mother ship's most recent attempt at changing the tide; having Sheamus return a heel after Wrestlemania 31 and making him look like one of the cannibals from Cloud Atlas (he also is quoting Gladiator now. It's like WWE turned Sheamus into a parody of epic movies!). Okay, maybe it's the new Teenage Mutant Ninja Turtles catastrophe that made Sheamus come back with a horrible mohawk and beard, but still. Not good Sheamus, not good. If he keeps this look for a few more years, he could find himself climbing this list.

Memo to all aspiring wrestlers out there; if you have Hulk Hogan esq hair, GET RID OF IT! It doesn't work, it will leave you before you're thirty five, and there's a good chance you could develop a condition known as egomania if you had it long enough. Look no further than Steve Austin. Long before he was Stone Cold, he was Stunning Steve in WCW, where his hair was so much like Hulk Hogan's, you might've thought he was the Hulkster's illegitimate child. No wonder he shaved his head upon getting to WWE. In the end, I think we can all agree cutting off the stupid Hogan hair was the best decision Austin ever made. Well done Steve. Just another reason you're better than the Hulkster.

Ah, the most obscure of the wrestlers on this list. Kwee Wee, perhaps the stupidest wrestling name in the history of the western hemisphere, was portrayed by Allan Funk, a lifelong jobber who inexplicably agreed to this gimmick (guess it beat staying home). Among the many things wrong with this gimmick was Kwee Wee's hair, which looked like Funk had been electrocuted, given an enema, and then given both at the same exact time. Really, the only reason Kwee Wee isn't higher is because no one knows who he is. Big help in this column. Poor Allan Funk. At least Booker T's wife managed him. That was a good thing. Right? Right?!

Anyone who watched the NWA/early WCW back in the day will remember Butch Reed as the dude from Doom (also featuring Ron Simmons). They'll also remember that Doom was pretty damn cool, perhaps even one of the best tag teams ever. You'd think that sort of cool factor would transition with Reed when he was in WWE, right? Wrong. As it turns out, WWE decided to dye Reed's hair blonde (a similar thing happened to Shelton Benjamin twenty some years later), call him The Natural (a good idea) and then pretty much do nothing with him. Most importantly though, the hair. My God, was it blinding? Was there an issue with calling Reed "The Natural" with his natural hair color? In any event, huge mistake. Poor Butch. Thank goodness Doom was waiting for him. Who knew that could be such a comforting statement?

The Ric Flair of terrible wrestling hairdos, Jesse "The Body" Ventura never met a style he wouldn't try. At times, he had the Hogan haircut crossed with Joaquin Phoenix's look from Inherent Vice. At times, he had hair metal hair. At times, I don't even know what kind of style you could describe. The point is, none of it was ever very good. Hell, Ventura's hair to this day still isn't that good, and he's shaved most of it off. Come on Jess! You were in Predator. You were the friggin Governor of Minnesota! Just shave all of it off already, and have Vince destroy all the tapes of you with that hair from the 70's/80's. Hey, it's not like he wants to show footage of you anyway!

How fitting; the Hulk Hogan of terrible haircuts is Hulk Hogan's haircut. I love it! It's so embarrassing that every time Hogan appears in a video game, the WWE always makes sure to keep the bandana on him, even if he's wrestling. And yet, unlike all these other guys, this haircut actually works for Hogan. One, because he's had it since the dawn of time (I'm pretty sure Hogan came out of the womb losing his hair) and two because if you got rid of it, I'm pretty sure Hogan would look worse. Hogan with absolutely no hair at all? It be like looking at a dick with a Fu Manchu. And no one wants to do that. So thus, Hogan's Skullet is a forgivable offense I suppose. That said, it's still awful, it makes me feel emotions that I've only felt at the end of Transformers: Dark of the Moon (intense dislike with a side order of hurt inside) and if Hulk kept the bandana on till the end of days, I wouldn't complain one bit. Pen says this hairstyle being the most famous helps it get the number one spot. I disagree; what helps Hogan's hair get the number one spot is the fact it's the worst. Take it away, TAKE IT AWAY!

That'll do it guys. I'll be back tomorrow with...something. Probably music related. Till then, how about Jack Evans break dancing in front of CM Punk? Let the whiteness engulf you! 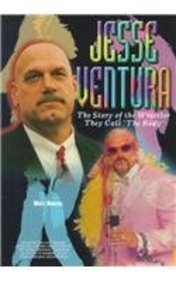 Jesse Ventura: The Story of the Wrestler They Call "the Body" (Pro Wrestling Legends)
Buy Now

Who had the worst haircut?