The Best Cycling Climbs in Tenerife

Tenerife's Iconic Mount Teide is a Fantastic Backdrop for Cycling

A favorite destination for Pro's and amateurs alike, the Canary Islands off the coast of North Africa offer cyclists a chance for challenging training in year-round and Tenerife is an exceptional environment for training.

Riders like Bradley Wiggins and Team Sky Pro Cycling appreciate how Tenerife can help them develop their training for the season ahead. The island has a fantastic mix of sinuous climbs, flatter plains to the North-East and a central Mars like climb up to altitude that forms arguably the longest road cycling climb in Europe- the ascent up Mount Teide.

If you want to know where the climbs are in relation to where you're staying there's a handy map of the main Tenerife cycling climbs at the bottom of the page.

This 5km section is tough with an average gradient of 13% over the course of just 3.5 brutal kilometers. This is certainly a climb that bike manufacturers were considering when they made compact chainsets.

Climbing the Roads of Tenerife Heading for Teide

Climbing Teide from El Medano via Granadilla and Vilaflor

Whilst there are a number of routes up the Volcano, the climbs from the South are well known with amateur cyclists finding budget accommodation in results like Playa de las Americas.

The ascent from the fishing village of El Medano on the south coast begins at sea level by the Montana Corona and rises continuously for 37 km on a fairly direct route up through the landscape to what appears and, while not the longest of the ascents, is one of the most direct through the island’s lunar landscape, with an average gradient of six per cent until you reach the volcano’s dramatic crater rim.like the set of Moonraker climbing up to over 2100 meters above sea level. You'll be well into oxygen dept by the time you reach the heady altitude of 2190 meters.

Starting on the TF64 beside the airport the road kicks up towards Castro San Isidro and Yaco before picking up the TF21 in the town of Granadilla to climb up and through Vilaflor.

From the northern side of the Island there are two key accesses to Teide. The TF21 route is the more direct as it snakes up from LA Orotava through Aguamansa and past the Restaurant Paso Del Teide as it zigzags up the mountainside.

Not long resurfaced this is a pleasurable climb where the road meanders up the mountainside, twisting and turning it's way like a continental climb should do. The newer road surface as makes it a great, if slightly technical descent.

One of the longest climbs on the island of Tenerife and a real pleasure to ride. The route up Teide from La Esperanza offers a beautiful approach with amazing views and a good road surface

The section from Las Rosas just past La Esperanza to the highest point on the road raises up from 960 metres to 2247 meters above sea level over the course of nearly 30 kilometres. The gradient is a sensible 4% but the climb has a habit of easing off in sections so don't expect a uniform gradient throughout.

The Eastern town of Arafo allows you to take the TF523 up to the top road to Teide. Climbing for 18 kilometers and gaining 1,259 meters at an average 7% this is definitely a climb to test yourself against the best through the likes of Strava.

Currently the Strava mens leader for the climb of Arafo is Ingvar Ómarsson. Never heard of him? Ingvar is the current Icelandic national road race and MTB champion as well as a regular on the international MTB circuit although it's a wonder he's not racing for someone professionally on the road at Pro Tour level. (Correct as at 15/02/2015)

Proving that you can climb in Tenerife without being in the shaddow of Teide. The Pico de Ingles at that northeast of the island is a great climb with a host of different ways to tackle it. Two of the most popular are climbing up from sea level at San Andres or alternately the climb from San Cristobal de la Laguna via Mercedes on the TF12

There are also alternative ways to climb the Pico de Ingles such as from the coast at Almaciga and via Taganama although like Majorca's infamous Sa Colobra climb you have to ride down the same road, turnaround and come back up again.

Los Silos to Erjos via the Camino Real las Arenas

If you love switchbacks this climb cut into the mountainside offers fantastic riding. From Los Silos the road rears to dramatically zigzag on a barely single lane road up the mountainside before easing off as you head past El Tanque and on to Erjos. If you're an adventurous cyclist looking for something special, you'll find it here.

Where to Cycle Around Tenerife and the Key Climbs to Ride 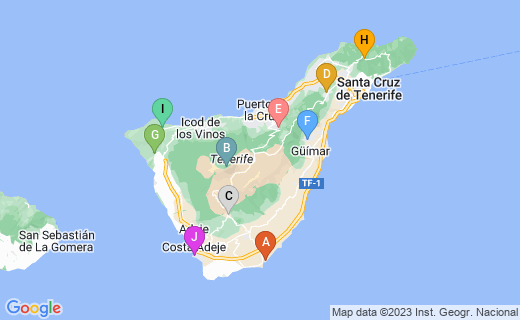 The Volcano that dominates Tenerife's skyline

It's one road North to Teide from the South of Tenerife

The TF21 cuts into the hillside to catapult you to the summit. A tough climb with an average 6% gradient and a cafe right at the end.

Follow the TF523 to the top of the island and see if you can beat Ingvar Ómarsson's time.

the road out of Masca climbs 450 meters in height in just 5 kilometers.

Climbable in multiple directions this is a great climb at the northeast of the island with fantastic views out towards Teide.

If you're looking for adventure the road up to Erjo offers switchbacks aplenty cut deep into the mountainside.

The popular tourist resort of Playa de Las Americas and neighbouring Los Cristianos offer a range of accomodation options to satisfy all.

5 out of 5 stars from 1 rating of What do you think to Tenerife as a place to train?

Have you ridden any of the climbs below? What did you enjoy or suffer the most on? We'd love to know about your cycling experiences and if there were any climbs we missed.