Four of the Best Elliptical Scooters Around

You probably recognize the basic push scooter. They had a revitalization during the late 1990s and are still fairly popular to this day. However, their one downside was lack of practicality. You needed to push off the ground to go anywhere. Elliptical scooters are step powered mini bikes, and they're just about the most fun you can have on two wheels.

Step powered elliptical scooter bikes are similar in concept to a bicycle. They feature a chain drive system that's connected to the rear wheel. Rather than sit and rotate the pedals, you step down on two parallel platforms to power the crank and propel the scooter forward. It's a totally unique experience and it's hard to describe (though I'll try). The upside is they are a nimble, light, portable and extremely fun way to get around town.

This article will take a close look at the elliptical step scooter bike, offering a bit of information about how they run, and also giving a review of a few of my favorite models on the market today. Because they're so new (and hard to define), there isn't a ton of reliable information, so I wanted to showcase a couple of brands that have created an excellent product. Let's get started and look at a few of my favorite stair / step elliptical scooters!

The basic design and operation of elliptical scooters isn't that drastically different from either a bicycle or a foot powered variety, though there are a few key features that make it a unique creature. They're very similar to an elliptical trainer, actually.

A step powered elliptical scooter has a slightly different type of drivetrain than a conventional bicycle. Obviously rather than using pedals and a crank that rotate, these guys use technology very similar to an elliptical running exercise machine. In most cases, the 'steps' on the scooter are attached in two places, at the frame near the front, and on a rotating pivot attached to the front chain ring. The effect is that power is delivered in a somewhat natural 'stepping' pattern. The feeling is bizarre and very cool as you zip along the street.

Do They Have Gears?

The different system does complicate gearing. Obviously a traditional front derailleur system won't cut it. Most of the products on the market are single speed. However, there are a few brands coming out with some great elliptical scooters and bikes in this style with multiple speeds by using a rear derailleur, giving as much as 7 or 8 speeds, usually all you'll need. That lets you tackle hills with ease.

Elliptical scooters and step scooter bikes should always have brakes, never opt for a brakeless variety. They're capable of going just about as fast as a bike and as such you should have a good set of brakes, as well as a helmet when riding.

The Zike Z600 is a great example of how a step powered elliptical scooter could really one day become a legitimate rival to the bicycle. Zike is one of a couple of brand names that are really going after the step scooter bike market.

The Z600 has six speeds and utilizes a rear derailleur for shifting purposes, paired to a grip shifter. It has brakes front and back, including a powerful disc brake on the rear wheel. The combination ensures that this elliptical scooter will stop on a dime.

The frame is aluminum and it's strong and lightweight. It's a lot more portable than a bicycle with its small size and wheels, and the handlebars even fold down when not in use, so it can be fit into a vehicle more easily.

The elliptical drive system is smooth and offers fun and effective exercise for riders of all skill levels. It's definitely a good elliptical scooter for someone who wants to try this new system out! 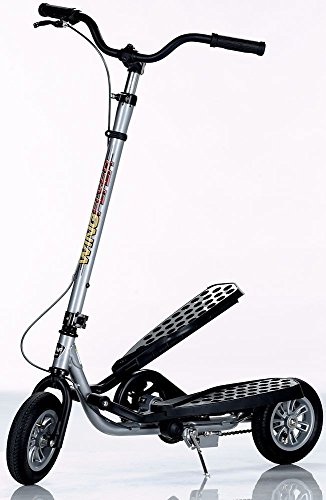 This is an example of a good quality elliptical scooter bike that's intended for kids, pre-teens and teens. If you're a smaller adult it will probably be fine for you too, but for tall people it's not a long term option.

It's a single speed and it's probably meant more for fun and recreation than for serious riding or commuting. It's small, light and fast, and comes with a single rear disc brake that's probably all you need for stopping.

The single speed design is straightforward and fun to ride, and it provides an excellent workout; you'll be feeling it after a half hour of riding for sure! It's made with a steel frame and the handlebars unlock to fold down for easy storage or transportation in a vehicle. It's also pretty affordable and makes a great gift for the family.

If you're hoping to commute every day or use it as a serious rider, I'd recommend one of the alternatives listed here. But if you just want to give step scooters a whirl and have some fun, the Z100 is a great choice!

The ElliptiGo is a newer brand, and it's offering one of the best elliptical scooter bikes money can buy. It's an impressive, capable machine that'll compete with traditional bicycles.

It has been designed as an alternative to cycling, particularly for those who suffer from impact injuries to the knees. If you love to cycle but knee or lower back pain prevents you from doing so, this might be the answer.

There are some differences. It's a bit heavier than most bikes, and obviously the stance is different. However, there are similarities, such as a familiar handlebar and a multi-speed system that'll let you tackle any hill a bicycle can.

The Shimano Internal hub has 8 speeds to choose between, and it will shift gears even at a standstill. It's a low impact ride that's both fun and great for your body. The ElliptiGo is a lot more expensive (because it's a specialty item) but it'll pay dividends. Definitely one of the top elliptical scooters I've found. 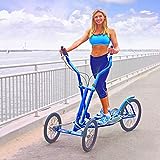 The Summit 8 is an example of a 'serious' elliptical scooter bike that you can use to work out, commute or just mess around and have fun on side roads and trails. It's built to be comfortable for an adult to ride and has a 400 pound weight capacity.

Frankly, this is a serious means of transportation and a fantastic exercise machine. Two front drum brakes and a rear dual pivot brake ensure this bike stops really well when you need it to. 8 speeds let you handle any hills you'll encounter. You'll feel like you're flying along the flats.

This elliptical scooter bicycle is a bit of a departure in a few ways. First off, it has dual front wheels, so it's really more of a tricycle than a bike. Secondly, there aren't handlebars, at least not in the traditional sense. Instead, there are dual upright handles that have the brake levers on each one. You pull the handles along with each step as you 'pedal'.

The steering is different too, instead of turning the front wheels in a direction, you lean in the direction you want to turn. It takes some getting used to (it's different from the countersteering cyclists are used to), and really it's more like 'carving' than steering, and similar to surfing or skiing.

Because it engages your whole body the StreetStrider Summit elliptical scooter bike is an excellent workout and you'll really notice the improvements if you ride every day. It's super fun to ride, and it gets tons of looks. It's an altogether different beast, but I'd recommend it fully to anyone seeking a low-impact cycling alternative.

Are Elliptical Scooters Good for Exercise?

As a matter of fact, these bikes are an excellent and healthy form of exercise, equal to an elliptical trainer in many regards. There's nothing that can quite replace the dynamic exercise you'll get from tackling real life hills and roadways. Unfortunately they have been unfairly designated as toys by many people so far, probably due to the association with cheap kids scooters.

The fact is, some of the geared versions are equal to a bike in range and offer a great exercise while minimizing strain and stress on your knees. Step scooters and elliptical scooter bikes are a nice alternative to an indoor elliptical trainer, and a lot more fun too.

Do you consider this a viable form of transportation, or just a novelty or toy?