When I was a kid, two things drew my attention to Saturday afternoon television: Roller Derby and Big Time Wrestling. The professional wrestling program was local and often filmed in Veteran's Memorial Hall downtown on the Scioto River.

Other towns in the Greater Columbus Area received local wrestling shows from Dayton and Cincinnati, making Ohio a pretty popular place for wrestling shows on broadcast TV. This was long before cable TV and pay-per-view bouts. Folks could go downtown to Veterans Memorial hall and see the shows live in Columbus.

Occasionally on the local shows and in special television productions with bigger names in pro wrestling, Flying Don Eagle would compete, wearing a Mohawk hairstyle.

At some point in the match, Eagle would perform a war dance and use a flying drop kick to his opponent.

Later I learned that this technique is what martial artists call the twin-foot jumping side kick (using both feet). It was great to watch! Little did I imagine that I would be teaching this technique one day, but it was always my favorite move. Chief Don Eagle was a member of the Mohawk Nation on the Kahnawake Reserve in Quebec, Canada. The more I learned about the Chief as I grew older, the better I liked him.

Standing 6'2", the Chief was born in 1925 on the Kahnawake Reserve, but unfortunately died in the spring of 1966 in his early forties. He had enjoyed fame, a big box office take, and even regional championships.

Billy Two Rivers, from the same reserve, looked up to Chief Don Eagle and the inroads he'd made not only into pro wrestling, but into understanding between First Nations and whites.

The Chief would have been pleased to be on Earth to see the active partnership of the First Nations in planning and implementing the Vancouver 2010 Winter Olympics. His work in the 1960s was a part of bringing First Nations a larger voice in Canada in 2010.

Billy Two Rivers also became a professional wrestler because Chief Don Eagle brought him to my childhood home of Columbus, Ohio and Big Time Wrestling in order to train.

If the two Mohawks were in Columbus today, Vet's Memorial would be deluged with wrestling fans, given the play they'd have from digital media and the popularity of current wrestling federations in America. As it is, Billy Two Rivers was born in 1935, making him 76 at this writing. He had a successful quarter-century career and 5 years as Chief Don Eagle's tag team partner.

Having Mohawk heritage, I'm distantly related to both these two wrestlers and Chiefs, but Don Eagle was my favorite many years before I learned about my heritage.

The Pro Wrestling Hall of Fame: The Canadians

Many famous wrestlers from a golden time in professional wrestling show up in this book to bring you memories and fun. Canada probably contributed the largest number of well known wrestlers to the sport, including several First Nations members.

From Kahnawake to Quebec 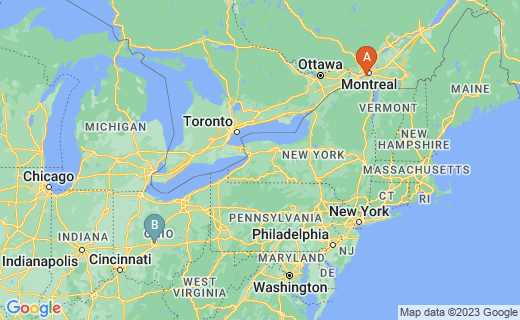 He Was Called a "Colorful Character"

Don Eagle was trained in wrestling by his father, Chief Joseph War Eagle. In addition to this sport, Don Eagle also trained in Jiujutsu and Fencing, (both of which I enjoy doing) and also Boxing. In fact, he was the champion of the Cleveland Golden Gloves Heavyweight tournament in 1945. In his years of wrestling, he suffered many injuries including damage to the vertebrae (back injuries).

Don Eagle's back pain and death were similar to those of actor George Reeves (died in 1959). Some of the media reported that Don Eagle shot himself in 1966, while other sources adamantly denied this.

Since Don Eagle lived in Columbus, the people there talked a lot about his match with Gorgeous George for twenty years after the 1950 fiasco. Having done a flying shoulder block to George, Don Eagle landed prone on the floor -- The referee, Mullihan, called Don Eagle out and gave the point to George. In another round, Don Eagle was counted out while one shoulder was still off the mat, planned according to the match promoter's scheme with George. Having been a boxer, Don got up and punched Mullihan out and was suspended from the sport in Illinois.

This all sounds like another sportsman from Columbus - Woody Hayes, who punched a photographer and more in 1956, 1971, 1973, 1977, and 1978, all with fines, suspensions, probation, and a firing (References: OSU Archives; and ESPN Classic at espn.goDOTcom/classic/s/add_hayes_woody.html and quoted in Comments below). Some opinions are that Don Eagle should have punched out the promoter and Gorgeous George as well.

Don Eagle continued to wrestle and draw big crowds, then brought Billy Two Rivers down from the reserve to Columbus to become another wrestling star. I wish I'd been old enough to talk to both of them.

Chief Don Eagle will always be my favorite wrestler.