The Great Blue Heron Fishing on the Gulf Coast

St. George Island, located in the Gulf of Mexico just off the Florida Panhandle, is a beautiful beach edged by clear turquoise water and sparkling white sand beaches. It's definitely one of the most beautiful beaches in the world. The fine white sand sparkles, the clear blue gulf water glitters in the sunshine. While the winter months attract retirees and RVers like ourselves to the wooded St. George Island State Park at the tip of St. George Island, the rest of the island is sparsely populated in the winter and the beach is nearly deserted.

It's a lovely drive from the gateway to the St. George Island State Park out to the campground, and we enjoyed many beautiful views of the turquoise Gulf of Mexico water as well as Apalachicola Bay. The campground has nice, spacious RV sites, and as soon as we settled in, we took the short walk across the main road to see the great expanse of beach. Because the State Park is at the very tip of the St. George Island, it seemed very remote from the more populated tourist area that is near the bridge from the mainland. In the winter, there are snowbirds camping in the campground, but other tourists do not drive in to visit the beach. Once on the beach, we could only see crystal clear turquoise water and white sand in either direction.

My husband, Bill is an avid fisherman, and it wasn't long before the lure of the Gulf’s blue waters became irresistible. He purchased a 3-day fishing license so that he and his brother-in-law , Ted, could fish on the semi-deserted beaches of St. George Island.

With seagulls and a great blue heron eyeing the bait, they set up their pole holders about 20 feet apart on the white sand. The blue heron was comical as he watched each cast and eyed discarded bait hungrily. He paced the beach nearby checking out the shallow water and tide pools left by the receding tide. Anyone who enjoys watching birds would be delighted by the close up look we had of this great bird. When standing still posing with his head lifted and almost as tall as I am on his stately long legs, he look like royalty. The picture changes quickly when he walks along the beach in with his comical stalking gait.

The fishermen caught several small fish that were too small to keep, and Bill made the mistake of dropping one in a tide pool between the great blue heron and himself. In a moment, the great bird was edging closer to the pool of water and with a quick dart, caught the fish and walked off with it. After that, he watched Bill with an eagle eye, hoping for another nice snack.

The great blue heron is the largest bird in North America. It is also the most widespread heron and can be found on the saltwater shorelines, freshwater ponds, lakes and streams. The bird has a head to tail length of 35-55 inches and a wingspan of up to 80 inches. In flight, it is a majestic sight.

The heron is a wading bird whose primary diet consists of small fish that it catches and swallows whole. It has also been known to feed on small birds, reptiles and rodents.

Photographs of the Great Blue Heron and Dolphins

With such a willing subject, I snapped a bunch of photographs of the heron as he paced the edge of the water and waded in and out of the small pools. It was also fun to watch the pods of dolphins that swam past every now and then. Sometimes we could see smaller dolphins that we assumed were the young ones swimming circles around the bigger ones or leaping out of the water. They may have been fishing, but they really looked like they were just kids having a good time.

Meanwhile, Bill was having less luck with his surf fishing endeavors. After hours of unsuccessful casts, Ted finally left Bill to watch both fishing poles and went for a walk. It was only a minute or two before Bill suddenly heard the “WHEEE…EEE…..EEEE…” screech of his line unreeling at a hundred miles an hour as it was pulled out to sea. He started running towards it just in time to see the line run out, and the pole jump out of it’s holder and head for the Gulf of Mexico.

Dolphins Swim Near the Beach

The Fishing Pole That Got Away

Yelling, “NO! NO! NO!…” and lunging again and again for the pole which kept lurching just out of reach, Bill soon found himself waist deep in the 57° water before giving up the futile pursuit. Dripping wet, standing forlornly on the beach watching his favorite pole, reel and tackle heading out to sea, Bill felt sick thinking that he might have hooked a dolphin that was now attached to his hook, line and fishing gear.

Suddenly he remembered that the other pole was unattended. He ran back to it and as he began reeling in the line, glanced up to see the tip of his pole dancing in the waves about 70 yards out in the Gulf. Apparently, whatever had caught his line was now disentangled from it.

A light bulb lit! Maybe he could cast a hook out to it and catch the line? First cast missed, but the tip of the pole still bobbed out there. One more try to he snagged something. Reel it in. Reel it in. Reel it in. Unbelievably, he actually snagged the line and brought back his pole and reel with hook and bait still attached. The giant fish, unscathed, swam happily back to it’s haunts in the sapphire waters.

Bill and Ted came home with the best “Fish That Got Away” story ever. And those of us who watched the Great Fishing Fiasco are still laughing! 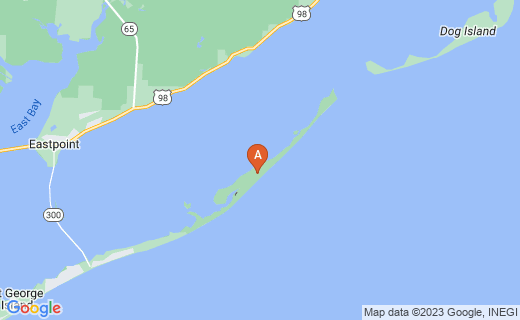