Why Tarps are Better Than Tents

Awoken by the sun and protected from the night rain, a tarp is the ultimate shelter for truly experiencing the wilderness while backpacking. Oddly - to sleep under a tarp, is to camp in rebellion, to protest the nature of what camping has become. As an open-air camper, you are boycotting this world of walls.

Perhaps the worse invention man ever dreamed up was the wall. Yes, yes - they are great at protecting cities from the barbarian horde, but maybe civilization is too highly rated anyway. Though walls are great at keeping the undesirable out, they also serve to keep you in. Walls are the foundation for a prison of our own desire.

The biggest obstacle to tarp camping is fear. Man fears a world that is unobstructed by walls, even if those barriers are of the wispy nylon variety. Man fears what goes bump in the night and forgets, that as a beast themselves, they bump too.

Of course, if you really desire a closeness with nature, you can skip the tarp all together and lie on the bare earth with a pile of leaves under your head and the stars in all their glory in front of you. Though sleeping out like this, truly at one with the environment, is something everyone should try - it gets awfully wet when it starts to rain.

Though at times, tarps have their limitations: Drifting snow and biting insects come to mind. A little experimentation with pitching styles and optional equipment can overcome these minor annoyances.

Tips for Pitching a Tarp 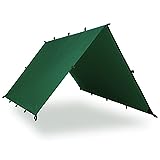 Cooking and eating in your tent is dangerous. From erupting in fiery ball of flame to attracting curious animals like bears, it is something you don't want to do.

Many campers that started in Scouting, remember packing the heavy canvas dining fly along with them. Though the Scout lugging that heavy tarp on their back drew the short straw, they could smile knowing that at least it wasn't the cast iron Dutch oven in their rucksack. At night, no food was allowed in the vicinity of a tent and the cooking fly was an area devoid of horseplay.

Today with lightweight silnylon materials, the era of the canvas fly has reached its end; however, the rule of "no horseplay in the cooking area" still stands.

Most camping experts agree that the cooking and eating area should be located at least 100-feet away and downwind from where you plan to slumber. Then again, when the reality of the woods takes hold, that distance generally condenses to about 20-feet. Even the most seasoned camper finds laziness in laying out their primitive camp.

Within the realm of lightweight backpacking, when there is only one tarp, you must make a decision. Will you take the chance to cook, eat, and sleep in the same place? Though most ultralight backpackers are careful, it is a better idea to devour your trail vittles someplace other than where you plan on throwing your sleeping bag.

Camping under a tarp doesn't always mean sleeping on the ground, for there is nothing like swinging in the night breeze in a hammock. With the rising popularity of hammock camping amongst lightweight backpackers, an interest in specially designed tarps has risen too.

Learn to Tie a Taut-line Hitch

Though there is an repertoire of knots that each backpacker should learn, for tarp camping, the most important is the taut-line hitch. The video above demonstrates how to properly tie one.

Have you ever camped out under a tarp?

Using a Tarp with a Bivy Sack

Bivy sacks are great solutions for lightweight backpacking. Just slide them over your sleeping bag, zip them up and nod off to sleep. They are fantastic until it starts to rain.

Yes, a good bivy sack will keep you and your sleeping bag dry, but feeling the raindrops hitting the outside of the sack all night is rather uncomfortable. Most backpackers find this a rather torturous activity. Also, it is impossible to cook underneath or change your clothes inside the tight confines of a bivy sack.

Enter the tarp, it doesn't have to be large just big enough to avoid those uncomfortable nights. Some ultralight backpacker suspend a 3' by 3' piece of silnylon over their heads to make the compromise between light packs and comfort.

Backpackers are a rather restless bunch, always dreaming about the next adventure, many find themselves rolling through the night in their bivy sack. For this reason, rolling sleepers should never camp near cliffs or on the banks of a raging river.