Unless you spent some time watching the 2013 Masters Golf Tournament you most likely have never heard of Tianlang Guan. To be honest, the first I heard of him was after his amazing first round at the Masters, which is played at the Augusta National Golf course in Georgia. Guan shot a 73, one over par in that first round, which for most professional golfers would be a pretty decent, but not great first round on this very difficult golf course. But what separated Tianlang Guan from all the other professionals at the Masters was that he is an amateur, and he is also only fourteen years old. To put this in perspective, he is the youngest player to ever play in the Masters, by almost two years. He is also the youngest golfer to ever make the cut and play on the weekend at the Masters. He’s just a kid of 14, how amazing was that?

For what will certainly be a record for years to come, and for simply getting there and playing in the most prestigious professional golf tournament in the world at the age of 14, Tianlang Guan is my Athlete of the Month for April, 2013.

And what do you think Guan was doing the night before his first round at the Masters to prepare? What many other fourteen-year-old kids do on a Wednesday evening, homework. You see, Guan is in the eighth grade and his parents, who followed him here to Augusta, Georgia all the way from their home in Guangzhou, China made sure that his textbooks came along for the ride so that he wouldn’t fall behind in his school work. And before he left for his first round at the Masters his mother packed a tote bag with snacks and juice boxes for him and sent him off into the history books, literally. Upon hearing this it sounded to me like a mother sending her child off to camp for the day, not the most prestigious golf tournament in the world. How refreshing is this?

While Guan is tall and lanky for his age, he still has that youthful, boyish look to him. He speaks fluent English, which only further feeds the media crush around him. According to his mother, Hongyu Liu, he is a typical teenager with a messy room, who just happens to have the poise and game to compete with the best golfers in the game.

To put his performance further into perspective, let’s consider for a moment that he finished his first round at the Masters in a tie with five past major champions. And he finished two shots ahead of Bubba Watson, the defending Masters Champ. Not bad for a fourteen year old kid. Former Masters champion Ben Crenshaw, who played with Tianlang during their first two rounds, could only marvel and applaud as the kid worked his magic on the Augusta Golf course. Crenshaw came away very, very impressed with the poise and patience that Tianlang displayed while playing.

His second day on the job at the Masters produced another solid round, a three over par 74, which put him at +4 for the tournament. I have to add here that I was not happy with the golf officials who penalized Guan with a one stroke penalty on the 17th hole for slow play during his second round. I understand they have rules for keeping the play moving but for God’s sake cut the kid some slack. He’s just fourteen; do you really think it was necessary to penalize him a stroke? I watched plenty of other players who seemed to be taking a long time to hit their shots and none of them were penalized. That one stroke penalty almost cost Guan the chance at making the cut, which at the Masters is the top fifty players or those within 10 shots of the leader after the second round, and that would have been a crying shame. But make the cut he did and another record fell by the way side.

So how did Tianlang Guan wind up playing in the Masters? Like all the other players here he had to qualify to get into the tournament. Guan won the Asia-Pacific Amateur Championship held in Thailand in 2012 to qualify for the Masters. In his relatively short golfing career Guan has played in over 200 tournaments, mostly in Asia. While many consider him to be the future of golf, Guan realizes that he has work to do to elevate his game. But his aspirations and goals in the game of golf are lofty and he not only hopes to win the Masters someday soon, but plans on winning all four of golf’s major tournaments, in the same year. For now, he has relished the opportunity to play with the best players in the world before heading home and back to school.

I’m sure we are going to be hearing great things from young Tianlang Guan in the years to come. Whether he achieves his goal of winning all of golf’s major tournaments is yet to be seen. For sure, he has left his mark here at the Masters and he has ignited a frenzy back in his homeland where over a billion people are rooting for their young new star. Golf has never been a popular sport in China and estimates place the number of golfers in China at roughly 500,000, which sounds like a lot but not when you consider that there are over one billion people in the country. Part of the problem is that there are less than a thousand golf courses in all of China and the country limits the number of courses that can be built. It’s very possible that young Tianlang Guan could start a golfing revolution in China much like Yao Ming did with basketball years ago.

After taking his best shot at the Augusta National Golf Course, young Guan finished at +12 over par and in 58th place, a fine showing for someone so young. He finished just three strokes behind former Masters Champion, Phil Mickelson. His parents, family and friends followed his every move around the course over the four days. His mother lugged his tote bag with his snacks and drinks. He wasn't in contention to win on Sunday, which would have been a great story, but he has certainly left his mark on the game.

Congratulations to Australia’s Adam Scott for becoming the first Australian to win the Masters. Scott birdied the second hole of a playoff against Argentina’s Angel Cabrea for his first Master’s Championship. 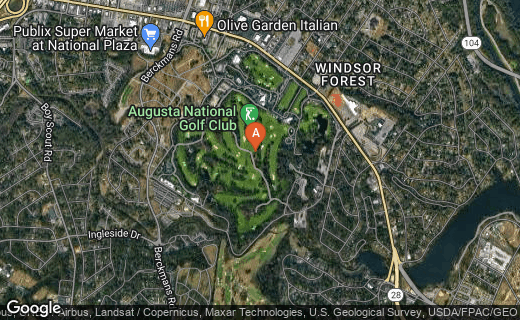