What is Ultimate Frisbee?

Have you recently found out about this fantastic summer sport and are looking for Ultimate Frisbee rules? Well you'll be happy to know that the rules can be learned fairly quickly and you only need a field, a disc, and a few friends to play!

Ultimate is a limited-contact team sport, meaning that fouls are used to discourage contact between players. The unique combination of:

makes Ultimate a unique, fascinating, and demanding sport. But you have to know the rules first. Luckily there's only 10 simple rules you need to know before you can start playing. Since Ultimate is self-officiated, it's important for all the players to have a good understanding of the rules.

Here are ten basic rules of Ultimate Frisbee. Learn these for the first time you play, as it will be enough to get your started. Once you get a few games under your belt you can look into more of the details behind the rules. 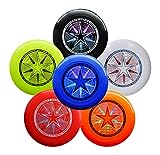 More on the Spirit of the Game (SOTG)

SOTG is unique to Ultimate and is a very appealing feature of the game. Let's get more into what SOTG means:

1. The Golden Rule: Treat Others as You Would Want to be Treated

Nobody really likes to be treated poorly, so don't be mean to others. A spirited game requires mutual respect amongst all players. If something questionable happens, assume the best and give the opponent the benefit of the doubt.

The spirit of the game can be quite difficult to follow at times. It isn't just some lofty idea that everyone talks about but comes naturally. There can be some pretty hard fouls that get committed, and some close calls have to be made in close games. You will be put under pressure, and it's how you handle yourself emotionally that is so vital to SOTG. The concept can fall apart rather quickly, but if you act to fix things through the golden rule, the game can improve.

3. Heckling and Taunting are Different

Heckling can be fun if done in the right way, and it is a part of the culture in Ultimate. They are typically done from spectators on the sidelines, and are only friendly pokes. On the other hand, taunting is not spirited and is wrong. Do not make abusive or harassing remarks towards an opponent's foul call or other close play. Taunting can escalate and destroy SOTG.

4. SOTG is Compatible with Championship Play

Even at the highest levels of the sport, it has been shown that you can be completely competitive and yet not diminish any respect or fair play with your opponent. This can be a hard concept to grasp, especially when you look at the professional leagues of other sports. No aspect of the game is so important where SOTG would not apply.

Really, this comes back to the golden rule. Two wrong do not make a right. In the very rare case of being severely mistreated, you can raise the issue with your captain or file a complaint with your Ultimate organization. This may backfire however, as a complaint could also be filed against yourself.

Give yourself some time and room to breathe after a disputed play, close call, or a hard foul. Emotions can run high in the heat of competition and you don't want to do something you'll regret. If you wait just a few seconds you will feel yourself calm down and be able to focus on the facts of the play. By being calm you will also find your opponent responding more calmly.

7. When You Do The Right Thing, People Notice

People do notice when you let things go. You may know you've done the right thing but it can be hard sometimes when there is no obvious praise. However, over time you will see that your opponents and teammates respect you more and more.

8. Be Generous With Praise

Gratitude and thanks are infectious. They are very small acts that require almost no effort, yet can yield a huge payoff. Complimenting the other teams good play or a teammates honesty raise the energy level of everyone in the game.

This is an extension of number 7. Ultimate is an addicting game that you can find yourself playing for years, and so will the other people you play with. The impressions your teammates and opponents have formed of you will linger for many seasons to come, so this inspires good conduct and the SOTG even more.

Don't focus on any of the negative energy. Just play hard, act fairly, and have fun

Get a Feel For Ultimate Play

Have You Played Ultimate Frisbee Before?