I'll admit it, I've liked Victoria (Lisa Marie Varon) since the first time I saw her.
I loved her psycho character.
I remember her turning on Trish Stratus, stalking and scaring Stacy Keibler, the first ever Women's Hardcore Match with Trish and Victoria.....the list goes on.
Victoria was on February 10th, 1971, in San Bernardino, California.
She started out as a cheerleader in High School(something that would show up a few times in her WWE Diva career in photo shoots), and she was a really good one.
Lisa was so good that she was recognized by the National Cheerleading Association.
She earned an All-American award for cheer leading and was chosen to cheer at half-time at the NFL Pro Bowl.

After graduating, she started into medicine, studying biology at the University of California, Los Angeles and medicine at Loma Linda University.
But while she was working as a Human Tissue Coordinator at the Inland Eye and Tissue Bank in Redlands, California, Lisa began something that would open a whole new path in her life.
She started working as a personal trainer and started teaching aerobics at a gym. From there she decided to enter a bodybuilding competition and in her first attempt, she won the middleweight division.
Moving from Bodybuilding, she started entering Fitness Competitions like the 1997 and 1998 ESPN2's Fitness America Series. She won in 1997 and entered the Miss Galaxy Competition in 1998.
From there, another event happened that would change her life.
She met Torrie Wilson (who had actually been down a similar path). Torrie actually won the 1998 Miss Galaxy Competition and she and Lisa became friends.
Torrie moved to Los Angeles and got a job with World Championship Wrestling (WCW) and she invited Varon to one of the shows. Lisa tried but failed to also get a contract with the WCW. That lead her back into Fitness Competitions where eventually, at the National Physique Committee Team Universe show in New York, she placed second and got her IFBB Pro Card. During this time fate was still guiding her path as she met Trish Stratus.

Victoria moved to LA in 2000 and started working at a gym there where she ran into (you guessed it) ANOTHER wrestler, the WWF's Chyna. Chyna encouraged Lisa to become a wrestler, so Lisa put together a resume and sent it to the WWF. Only two days later, the WWF contacted her setting up an interview for one month later.
Despite having an athletic background in cheer leading, track and field and bodybuilding, Lisa didn't know how to wrestle!
She immediately hopped on the internet and found a wrestling school, Ultimate Pro Wrestling in Southern California, and began. She did so well there (with the cheer leading gimmick) that when the WWE talent scout saw her, they signed her.
This lead to a brief stint in a storyline with the Godfather after which she was re-named Victoria and sent to Memphis Championship Wrestling (MCW) for training. When MCW closed, she moved to Ohio Valley Wrestling (OVW) and started using the name Queen Victoria.
On July 7, 2002 Victoria returned to the WWE as the demented, sadistic heel we all know and love.
And the rest is HERstory.

On the January 16th, 2009 edition of WWE SmackDown!, Victoria announced her retirement from wrestling.
Victoria is now looking at a possible MMA career.
And NOW Victoria is a TNA Knockout called "Tara".
Tara?
Tara is short for "Tarantula" and she carries one to the ring with her. Kinda like Jake the Snake and Damian.
And now (as of May 17th), Lisa Marie is no longer in TNA.
So will she go back to the WWE, or go into mixed martial arts?
Now Tara is back in TNA.
I really wish she'd make up her mind!

Well TNA has released Tara in a "cost cutting measure".
That's also a measure that gets the TNA Knockout roster down to about five wrestlers.
They said on their Twitter account...
"Impact Wrestling has released Tara. We thank Tara for all her contributions and wish her the best of success in the future."
In the past month, Madison Rayne, Christian York, Joey Ryan, Taeler Hendrix, Saw Shaw and Matt Morgan have all parted ways with the company.
There were rumors that Tara was thinking about retiring soon (she is 42 after all) but I guess this kinda cements it.

The Beautiful People almost get their revenge on Tara. Almost.

Lisa Marie returned to wrestling (kind of) on June 19th, 2015 when she was a guest referee for the Maryland Championship Wrestling event Ladies Night.
She was the ref for the MCW Women's Championship match between Mickie James and Amber Rodriguez.
She even got into the action a bit when she had to take another former WWE Diva Melina out with a Widow's Peak.

Lisa Marie Returning To The WWE?

Lisa Marie has been teasing a possible return to WWE.
What's really wild is the theory that it may not be as Victoria, but as Bray Wyatt's "Sister Abigail".
We all know how well Lisa does psycho.... 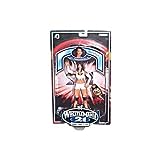