When the summer heat makes pools and the ocean feel like saunas, Floridians head for another favorite water pastime - water parks.  Though the Sunshine State may be better known for its beaches and theme parks, two of the nation's top water parks can be found in Orlando - Typhoon Lagoon and Blizzard Beach.  Not surprisingly, both are Disney parks.  Those two aside, Florida still has other great water parks, from Miami to Jacksonville and Tampa to Daytona.

Typhoon Lagoon is one of two water parks located within Walt Disney World.  In true Disney fashion, a story surrounds the creation of Typhoon Lagoon.  According to local legend, a huge storm, the storm-of-storms, swept through Florida, hurling surfboards into palm trees, boats onto beach house roofs, and the shrimp boat Miss Tilly to the top of Mount Mayday.  After the storm passed, Mount Mayday was left with numerous water slides down its slopes, and the Miss Tilly at its summit.  Every half hour, the volcano erupts in a geyser of water attempting to dislodge the shrimp boat.

With the highest attendance of any water park in the world, Typhoon Lagoon proves the popularity of its wide array of family attractions.  The Surf Pool is the largest in the United States in terms of size, bather capacity, water volume and wave height.  It is 115 feet wide by 395 feet long with waves that cycle between small bobbing ones to six foot waves, giving every bather a chance to enjoy the pool.  Typhoon Lagoon has three falls raft rides - Keelhaul Falls, the mildest, Gangplank Falls of medium intensity, and Mayday Falls, the most intense of the three.  The park offers water slides for all ages, from the mini versions for children under 48 inches in Ketchakiddee Creek to Storm Slides, three twisting body slides, to Humonga Kowabunga, three body slides that drop visitors five stories straight down.  Need a bit more excitement?  Try swimming with live sharks at Shark Reef, or jump in a raft to try Crusher 'n Gusher, an exciting raft water coaster that flies around hairpin turns and soars uphill on the way to Hideaway Bay.  If these attractions are too exciting, take a lazy float on an inner tube down Castaway Creek or perfect your tan at Sandy White Beach.  Whichever attractions draw you to Typhoon Lagoon, just know that 2,000,000 visitors a year can't be wrong.  This will be a day to remember.

Like Typhoon Lagoon, Blizzard Beach is a Disney creation and has a story to go with the park.  A storm begins this legend also, a snowstorm, the most severe Florida has ever seen.  In the aftermath of the snow storm, Florida's first ski resort popped up, but as quickly as the snow storm came, as did Florida's heat and melted the snow.  What was left is now Blizzard Beach, the remains of a ski resort with water slides and pools where ski slopes once stood.

Blizzard Beach is home to the world's tallest, single-person, free-fall water slide in the world.  Summit Plummet plunges riders down a 120 foot vertical drop at speeds up to 60 miles per hour.  A digital read out at the bottom of the drop reads each riders speed.  The entire flume is 360 feet of spine-chilling thrills.  If the drop from Summit Plummet is too steep, try Slusher Gusher with a mere 90 foot drop that slides riders over two humps.  Visitors who love competition can race each other on three different slides - Downhill Double Dipper pits two racers against each other down parallel flumes; on Snow Stormers up to three people can race each other on winding 350 foot long slides, and the Toboggan Racers enables up to eight racers to speed to the finish on toboggan-style mats.  Children under 48 inches get there own water park within the water park in Tike's Peak while older kids who are still too young for the thrill rides can enjoy Ski Patrol Training Camp.  For a more relaxed pace, visitors might try a float down Cross Creek Country on inner tubes or the waves, waterfalls and beach of Melt Away Bay.  Whatever part of the park visitors choose to enjoy, or all of the park, there are activities for every member of the family, one factor that has ranked this water park number two in the nation.

Wet 'N Wild's signature thrill rides keep visitors coming back year after year.  Brain Wash plunges riders down a 53 foot chute into a 65 foot domed tunnel, all on a two to four person raft.  Der Stuka is a six story speed ride that rivals Blizzard Beach's Summit Plummet for vertical drop and speed.  Mach 5 sends riders down 1700 feet of twisting, turning flume on one of three different courses.  Several multi-person raft rides, such as The Black Hole and Bubba Tub will thrill the entire family.  Of course, there is something for everyone.  The meek at heart can take a leisurely float down the Lazy River or relax in the Wave Pool.  Children have their own miniature versions of many of the rides in the Kids Park, as well as spraygrounds and a shallow pool.

At almost 30 acres in size, Rapids Water Park in Riviera Beach is South Florida's premier water park.  It has over 35 water slides, a lazy river, wave pool and kids' area.  The park celebrated its 30 year anniversary in 2009, making it one of the oldest water parks in the US.

The park breaks its rides up into three intensity categories - wild, mild and kids.  Wild rides include Big Thunder, a multi-person raft ride that propels riders at speeds of 20 miles per hour up the sides of a funnel before plunging them down the darkened outrun tunnel; Black Thunder, a multi-person raft ride similar to Big Thunder except in complete darkness; and Pirate's Plunge, a speed slide with a seven foot drop.  Mild rides include the wave pool, lazy river and the original single-person water slides.

Jacksonville Beach's water park at Adventure Landing makes a day at the water park easy and fun. With a large variety of rides for the entire family, shopping and dining, Shipwreck Island strives to create the perfect visitor experience. New in 2011 is the addition of cabana rentals which accommodate up to eight people, have a shaded and unshaded side and include a premier dining package.  Shipwreck Island offers several special rates, too, which entice water enthusiasts to enjoy the park on evenings and weekdays.

Rides at Shipwreck Island include The Rage, northern Florida's first uphill water coaster which propels riders up to 18 miles per hour, The Undertow that speeds riders up to 23 miles per hour over 400 feet of flume, The Eye of the Storm, an extreme body slide that rises over 40 feet, and the "mandatory" wave pool and river float, The Lil' St. John's River.  Families will enjoy the three stories and 12 slides of The Pirates' Play Village, and toddlers will enjoy the small pool and two slides in Kiddie Cove.

Big Kahuna's Lost Paradise in Destin, Florida offers panhandle residents a top-class water park with over 40 rides including thrill rides.  The park also offers cabana rentals and a miniature golf course, truly offering a little of everything for everyone.  The park opened in 1986 and has remained a favorite of anyone who lives in the panhandle region of Florida.

New in 2011 at Big Kahuna's is the Honolulu Half Pipe, a surf simulation machine that moves 36,000 gallons of water a minute.  Thrill rides include the speed slide Jumanji which plunges 70 feet in free-fall darkness, and the Maui Pipeline Speed Slides offering three different high-speed water slides.  Multi-person rides includes several twisting, turning, splashing raft rides such as Tiki River Run, Thunder River, Raging Rhino River, and Monkey River.  Kids have a number of different places to enjoy.  Bombs Away Bay offers waterfalls, slides, and pools for all ages with water depths from 0 to 5 feet.  Fun Fountains thrill kids of all ages with a huge variety of jumping water fountains.  Rivers to simply float on also abound; visitors can choose from Lazy River and Humunga River.  For families who visit the Panama City Beach area or any of the panhandle beaches, Big Kahuna's offers a different and refreshing getaway from the beach. 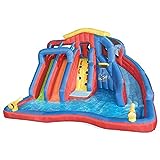