American Football is the number one spectator sport in the US. With three young boys in my home, football has become an ever present sport in my home. From September until November my two oldest sons play high school football. My youngest son plays house league football from the end of August until November and then he begins training again in March for rep league football which continues until the beginning of August. Thus, my football free days as a football mom last only from mid-November to the end of February. But I must admit, they are exciting if not exhausting months. As well, my boys are avid NFL fans each having their own favourite team. The Super Bowl, the big NFL Championship game is watched avidly in our home as well as by millions of others in North America. My sons' involvement with the sport inspired me to investigate the history of American football which minus some rule variations is virtually the same game played here in Canada

The game known as American football is a combination of soccer (European football) and English Rugby. However, the ancients Greeks are believed to have played a sport which is the ancestor of all three of these sports. 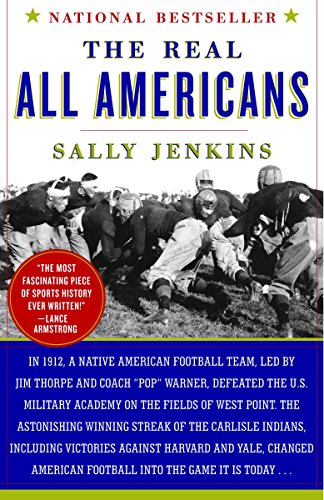 The Real All Americans
Buy Now

Development of Rules and Standard Play in Football

Football began to emerge as a sport with consistent rules and boundaries in the early 1800's when it was played in seven major public schools in England. November 6, 1869 is regarded by most football historians as the birthday of American football.

Touchdown: When a player catches a pass in the opponent's end zone or runs with the ball into the opponents end zone. A touchdown is worth 6 points.

Extra Point: After scoring a touchdown, the scoring team may try to kick the ball through the goal post for 1 extra point.

Two-point conversion: After scoring a touchdown, the scoring team my alternatively try to run or pass the ball into the end zone. If they are successful, it is worth two points.

Field Goal: During play, if a team kicks the ball through the goal posts of the opposing team, it is worth 3 points.

Walter Camp, a Yale couch was considered by many to be the father of American football. He considered 11 the ideal number of players for a team and was instrumental, in changing the form of play from rugby-style to the game watched and played today by millions. Adults and children alike in North America are fans of American football and thousands play in house leagues and rep leagues all over the continent. It is a favourite sport of high schools, colleges and universities and is a huge source of pride in schools and revenue in both college and professional leagues. It is amazing to consider how far back the story of football can be traced. From ancient Greece, to medieval Europe, American football has drawn inspiration. Although considered by many in this century to be a brutal, violent sport, its roots even as far back as 19th century college play were much more violent. Today, although injuries are not rare it is a much safer game. Rules and standardized play separate today's game from ancient Greek Harpaston and even mid-nineteenth century football. It seems to be one of those sports you either hate or love. In this household, we choose to love football. Better to play, but when my kids can't be out playing they are happy to watch their favourite teams battle it out on the field.

Hornet Football.org. A Brief History of the Game.

Understanding American Football.com. The History of Football in America.