Five of the Best Hybrid Bikes for Under $500

Graeme is a Victoria-based web developer who worked as a bicycle mechanic for three years. He loves writing about bike-related topics.

In the early days of cycling, you didn't have much of a choice when choosing a bicycle. Then came the mountain bike, which turned the bicycle world on its head and suddenly made trails and off-road riding a possibility.

Hybrid bicycles are the middle ground between road and mountain bicycle styles, and they're understandably pretty popular! This article is all about finding a great hybrid bike for under $500. We'll look at the top five.

Some people have a very clear-cut riding style and can confidently choose either a mountain or road bike and have it fulfill their riding needs. However, many people prefer a multi-purpose ride: they enjoy hills and trails just as much as the morning commute to the office. A hybrid bicycle is extremely fun to ride on both types of terrain.

This article will cover five of the best hybrid bicycles and brands out there. I will review different models that I think you might enjoy.

My goal is to help you identify the features you'd most like to have on your hybrid bicycle, and which brand and style will best meet those preferences. I hope I can help!

What is a Hybrid Bicycle?

Before answer the question of which is the best hybrid bicycle for under $500, we should probably first tackle another question: what is a hybrid, or crossover, bike? Since they don't fall into one particular category or another, they can vary widely in style and features, causing confusion as to what actually constitutes a hybrid. There are a few key features that are constant among most models. I'll list them here:

One of the Best Hybrid Bikes for Women or Men

Do you want a commuter hybrid bike that has a bit more character? You could go for a vintage ride, or you could opt for a new bike that has that classic look.

Critical Cycles' seven-speed model is a great hybrid bike and is priced well under $500. It's a nice option because it has the geometry of a classic frame and a throwback look you don't often see. It's not vintage when it comes to components, though, sporting a seven-speed rear derailleur. That's a gearing range that should be plenty for most commutes.

With a strong but lightweight steel diamond frame, chrome front light, integrated rear luggage rack, and front and rear fenders, this bike's price tag is striking. While it has good tread and could handle a gentle trail ride, this is more of an urban, commuter hybrid bike. For far below $500, it's hard to ignore this wonderful bicycle by Critical Cycles.

I know it says it's a men's bike, but this one would be perfectly comfortable for a lady too. Nice wide tires will keep you stable, and no chain to worry about coming loose!

The Diamondback Edgewood LX is a great choice because it's a very versatile bike. Though Amazon lists it as a men's bike, it's actually unisex, and it's got some great features. A true hybrid bike, this one has a butted aluminum frame with 6061 aluminum construction, meaning that it's strong and lightweight.

The front spring shock system has 63 millimeters (mm) of clearance, and the wheels are 700c and double walled for extra strength. This bike will perform great on trails and pavement.

A nice feature is that it has a spring shock seat, too. This adds some extra suspension and cushioning without dampening the ride, complicating the frame, or adding extra weight. 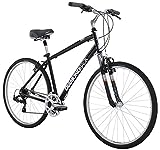 For well under $500, this hybrid bicycle has great suspension items, a strong aluminum frame, and it's very versatile.

The Schwinn Network 1.0 is a good hybrid bike for less than $500 that is very nicely suited to trails due to its generous tire tread, sturdy aluminum city frame tubing, and beefy front suspension. However, it will do just fine on pavement too, and it is almost as good as a road bike for pavement riding.

Front shocks and a strong and light aluminum frame accompany a Suntour crankset and Shimano gears linked to an SRAM twist shifter on the handlebars. The Euro style 700c alloy wheels are light and the attached tires have a good amount of width, more than enough to tackle those moderate trail rides you love. It's certainly not an off-road bicycle by any means, but it can handle some gravel and dirt roads with no issues. I highly recommend Schwinn bikes in general, but the Network is an especially good choice.

This model is 18", which is 'medium' by bicycle standards, and it has an adjustable seatpost which allows it to fit a wide array of riders. Other frame sizes do exist. Also, there is a step through women's frame version of this bicycle that's a bit smaller, in blue.

If you've read some of my other articles, you'll know that I'm a big fan of Diamondback Bicycles. Why? Because everyone I know who buys one still has it to this day. They last forever! This beautiful bike has a swooping aluminum frame, 21 speeds with Shimano shifters, and nice Kenda 32c tires that are designed for pavement but can handle a bit of trail riding. It's relatively light, really quick, and responsive on pavement. The riding experience is one of the best among hybrid bikes for less than $500.

This bike is available in many sizing options, from small to extra large frames, making it a bonafide unisex bicycle.

A Bike Tuned for Urban Riding

The Schwinn Volare is a capable and popular hybrid bicycle best suited for urban riding. With a simple 21-speed shifting system (more than enough for most situations) and a frame designed for efficient riding and speed, this bike makes it easy to get around quickly and comfortably. The 6061 aluminum frame and flat riser bars are optimized for an upright riding position, while the high-performance 700c wheels will glide along the pavement. It even comes with rapid fire shifters to make changing gears a breeze.

This is one of the better hybrid bicycles below $500 because it's fast, light, and capable in all scenarios. I recommend this for the city commuter or neighbourhood rider, though it's not the best choice for trails. The frame is 18" with an adjustable seat post, so it will suit most riders between 5'8" and 6'1" tall.

There is a men's and women's version of this bike, but the men's will comfortably fit a female if they prefer it!

I know I said five, but I wanted to include a bonus review. This is a really nice hybrid bicycle for just over $500. This ride features a high-ten steel frame, a 6-speed Shimano shifter and derailleur, and alloy cranks. Oh, and did I mention it's electric?

With this bike you get a 250-watt electric motor and 36v battery, which can carry you for about 18 miles on one charge. If the motor peters out during your ride, you can revert to standard pedaling. It's almost like having a little motorcycle with pedal power included as a second option.

The Watseka XP is a cheap, hybrid bicycle that's occasionally under $500 (when it goes on sale) that just happens to have a motor attached to it. What's not to like!?

Things to Look out for Before Purchasing a Bike

The hybrid is a good compromise for anyone who likes to ride on different types of terrain. However, you should recognize that a crossover bike is, indeed, a compromise. Even the best hybrid bikes under $500 will be somewhat lacking in certain areas. That's not a bad thing if you can recognize your preferred riding style. Check out this list of things to watch for before purchasing a bike.

What do you think of hybrid bikes?