How To (Suddenly) Fight With A Sword

If You Know Nothing About Swordplay or Sword Fights...

...don't be discouraged. You might be surprised; while it's definitely not easy, it's also not that hard to fight with a claymore or samurai sword if you apply the basics. The hard part, the difficult part, is actually understanding what happens in a swordfight.

The objective of this article is to cover the groundwork of swordplay. It details the need-to-know basics of fighting with a blade that you would have to understand if you ever got caught with one in your hands. In other words, if you have trained with a sword, have conditioned with a blade, or otherwise, then this is not for you.

Disclaimer: The author of this article, in no way, condones or is trying to inspire, violence in any manner.

Another Title For This Lens Would Be:

How to Fight With A Sword At A Moment's Notice.

Will Get You Killed in a Sword Fight...

And they are dumb.

Of course, if you are simply trying to impress your girlfriend, and there is no opponent, have as much fun as you want against that tree or wooden dummy.

But if you are in tournament, or happen to be in a real battle, don't spin around and definitely, never expose your back. Never. If you do perform such a maneuver, you have added a fraction of a second, taken your eyes off of your opponent, and exposed vital organs.

Other Places For Sword Fight Information

What You Protect, Why, and How.

In basic sword-fighting, keep the sword in front of you, right down the middle, with the point aimed at the head of the opponent.

For defensive purposes, you will keep your elbows in, like with most martial arts, so as not to expose your ribs and vital organs. Your goal is to not be stabbed in the heart or brain, which is usually short-term fatal, or the kidney, stomach, and liver, which is usually long-term fatal. While the best defense is not to be cut at all, your arms and legs have to protect your ability to live.

Please Note: On the right is a demonstration of the stance used by Aikido. It is fundamentally sound at basic and advanced levels; the weapon creates a distance barrier and the feet are positioned where they can shuffle forward or back. The purpose of this picture is not to endorse Aikido over other styles of fighting, only to represent an image of a good basic stance.

If you are using basic swordplay, you need to focus on one goal; hitting the person hard. If your opponent is fighting with a weapon, he will be blocking with it. The harder you hit, the more likely it will ring through his arms, causing him to drop the weapon, or at least fall back.

Note: To the right, a picture is provided of Samurai miniatures, in their standard overhead pose. While the figurines are representations, the manuever being used, is not. In it's basic design, the sword is a battering device that you swing. Some of the best results are overhead, and down, as hard as you can, because gravity aids your blow. Another use would be as a spear that you drive forward. If you are stronger or larger than your opponent, you have the advantage.

Speed is a great thing to have. Most swordfights end with the first strike, especially when you do not know how to fight. But speed is best served when you are experienced or you're attacking from surprise. Furthermore, if you do, somehow by some unimaginable distinction, get in a long, protracted fight, you won't be fast anymore. You'll be tired.

If you are fast, save up your speed for the one strike. It's either the moment the battle starts, or the first opening you see.

There are two main types of sword strikes: The Stab, which is a lunge, and the Slash (or the slice).

Depending on how sharp your weapon is, stabbing someone executes are large amount of damage as opposed to slicing. Many people think slicing is the way to go, and this is probably because of TV. So let's check this out real quick. Do you have a Katana or a sword that has been folded over hundreds of time, with an incredibly sharp blade?

Probably not. If you're going to pick up a blade and do simple sword-fighting, you have two good options that you will exercise.

The "Hacking" maneuver is a slicing technique, which you use, usually overhead, to beat down your opponent. It requires strength and a heavy sword. An example was provided earlier when discussing strength.

The "Lunge" maneuver (a decent example is represented in the picture) is a stabbing technique that is the most successful; it does not require as much strength, just a halfway decent point. The reason is is better is because it is quicker and allows you to use the strength of your momentum as force. You are also capable of "pushing off", which immediately gives you distance from a counter-attack.

Also, when you stab, you usually expose less of your vital organs. As a suggestion, these are the two attacks you should be practicing if you know very little about swords.

...Is the Basic Trick

The most widely used trick in just about every fight is the feint, in some form or another. Make a slight move indicating an attack in another direction and then switch to the true direction.

In a fight, you'll automatically be aware of the feint; you'll look for fake moves and maybe you'll make some yourself. As a reflection, though, you should be aware of a couple things and follow this advice.

...but keep them spread apart, at shoulder length. Your lead foot should probably be the same as your lead hand. So if you are right handed, put your right foot forward.

You do this for two reasons. First, you want to be able to shuffle back and forth, side to side, and have mobility. Second, by adopting this stance, you expose less of your body to an attack. Only the front should be automatically reachable.

Warning: The position of your feet are extremely important. If the opponent attacks you with your legs crossed in a fancy stance, you'll be knocked over. If your knees are locked, you'll be unable to move away. Some people also fall into the trap of over-extending their stance, so that their feet are extremely far apart, greater than shoulder width. Unless you are experienced and trained, do not try it. You'll only be caught off-guard.

It's not common to stare into your opponents eyes when you fight with a sword, unless he's already on the ground, cowering.

When you confront an opponent, your eyes should decouple, meaning, don't look at any particular thing. You'll want to see as much of the "picture" as possible. Through this, you'll sense where his body is moving and his blade.

Note: This is extremely important. If you get caught staring in the swordtip or the opponents eyes, they will feint, directing you to believe the attack will come from one direction, and then hit you, surprisingly, from another.

Swordmasters....Begin! - It is time for you to prove your merit in battle.

Riding in the distance, an enigmatic figure, clad in the dark laquer and embellishments of the Daimyo, issues his challenge. "Enough talk! We must fight! Your Western Medieval weapons are no match for my Katana!"

Turning to on his horse, a young knight looks forward, observing the contestest as he pulls his visor. As his squire hands him his armament, he counters. "What? How dare you!! By the Queen, I shall smite thee with my Claymore!"

Which Way is Best

Fighting with two swords is not as great as one might think; you've divided your strength between two weapons. Subsequently, unless they are extremely light, both swords will tire you out quicker and then you'll be unable to block,and unable to pursue a strong attack 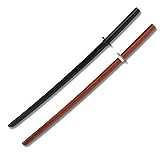 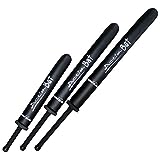 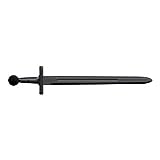 If a thick sword hits you, the fight is over. If a Foil hits you, he scores a point, although sometimes the hit can be fatal. If you have a Foil and are fighting someone with a Katana or some version of a longsword, you should probably drop your weapon and run. The Foil cannot block anything but another Foil, nor can it hit someone hard.

Note: The thin blades of Foils and Rapiers is easier to break if they try to deflect an attack.

If you have a sword and you are facing someone without a weapon, congratulations! You control the battle simply by keeping the swordpoint between you and your opponent. Even an experienced fighter will stay back.

If you are facing another sword, the person with the longer sword and reach controls the battle. If that is you, you are, sorta, in luck. Either way, the fight will be circling and hacking and backing away.

vs. a whirling weapon

Run. Throw the sword on the ground for momentum.

This is Why We Practice

Most people are often burdened by the truth and the saying that go along with the truth ("Practice Makes Perfect, etc.). Well, there's a reason to practice swordfighting if you ever anticipate getting in one. Simply put, you'll lose.

That's correct, you'll lose. Not because you're not smart and not because you won't know the basics. You'll lose because your muscles will tense up; you'll be nervous; you'll lock up and act with jerky movements. And then you'll make an error.

To prep for basic swordplay, walk up to a tree with a stick. A large stick. Perform the general, outlined, attacks a few times. Do this a few times a week. All you are looking to do here is gain a sense of comfortability and muscle-knowledge, where your muscles automatically know what to do if the situation appears.

Your comments are welcome. Please share any experiences you may have had, or training you have, that may further develop the interest in swordfighting. Just be reminded that the goal here is to give strong advice to a person who is just learning what to do when a sword happens to be in his hands.

Your Thoughts on Swordfighting - Comments Welcome