Wingsuit skydivers can achieve forward speeds of more than 100 mph (160 km/h). They look like flying bullets, and they can glide with such precision! Also their high-performance bodysuits allow them to slow down their descent to as low as 30 mph (48 km/h) which is quite remarkable.

However, since they have to jump out of a plane or jump off of a mountain, the wing suit glider needs a parachute designed for skydiving or BASE jumping. A wingsuit-only landing is not possible just yet, but a project to achieve that is underway! Fasten you seat belts, you're in for an unbelievable ride with the birdmen.

When I first saw this video, I thought it was some kind of special effect movie in which the actors were shot over green screen, and then superimposed over flight footage. I was really skeptical. The more I researched about the sport, the more I got excited. This is the real thing!

In 2004 the Outdoor Network (OLN) aired Fearless, highlighting the life of Jeb Corliss as a wingsuit flier. Once you start watching the first segment, you won't be able to stop until you see all 5 parts.

But sometimes... - wingsuit flyers can get into serious accidents

In 2003 at the Go-Fast Games, Jeb Corliss was paired with Dwain Weston for a demonstration jump, with Jeb wingsuiting and Dwain parachuting. At the last minute, Dwain decided to fly a wingsuit instead. So they jumped out of the aircraft. As Jeb was flying under a bridge and Dwain was flying over the bridge, something went terribly wrong.

(warning: this reading may be disturbing)

So Jeb would fly under the bridge, which was lined with hundreds of spectators, while Dwain would go over it. "All he had to do is miss it by a foot, and he would have been a hero". Instead Dwain smacked into the bridge railing, which tore his body in half. His parachute deployed, carrying what was left of his torso, while his severed leg plunged to the bottom of the gorge. "I thought people were throwing things off the bridge," Jeb says, and he continues "Instead, I was flying through his parts. And when I landed, I was covered in his blood."

Jeb Corliss soared across Tianmen Cave, also known as the Gateway of Heaven, regarded as the highest elevated natural arch in the world at 1,520 meters. The 35-year-old Corliss jumped from a helicopter 6,000 feet above the Tianmen mountain, flying towards it and sailed right through it.

The bird man failed at his first attempt, due to smoke brackets on his feet that did not work properly and forced him to take a detour.

"Flying across Tianmen Mountain has been the most challenging task in my life. I have visited and investigated many places, but there's no place like Tianmen Mountain. It has allow me to fulfill my goal of flying through a mountain." 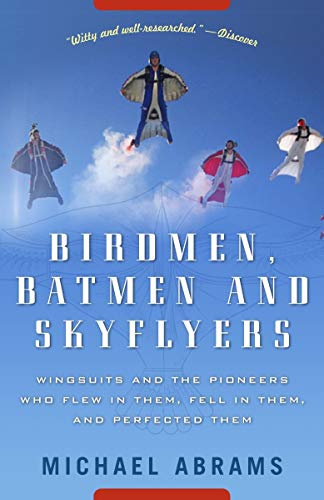 Birdmen, Batmen, and Skyflyers: Wingsuits and the Pioneers Who Flew in Them, Fell in Them, and Perfected Them
Michael Abrams writes about the present-day heirs to Deadalus and Icarus. Gradual refinement of equipment and techniques have made personal flight more commonplace, and less deadly than ever before. It's the renaissance of personal flight!
Buy Now

Loic Jean-Albert, aka the flying dude is another famous wingsuit pilot, but he's also a wing suit designer, photographer and cameraman.

The Mechanics of Flying Squirrels

Birdmen find some of their inspiration from flying squirrels which can manipulate the shape of their body to create the desired amount of lift and drag. Wingsuit fliers can alter both their forward speed and their fall rate towards the ground. Their goals are:

To accomplish both goals, the gliders need to manipulate the flight characteristics by changing:

a. the shape of the torso, twisting the shoulders, bending knees and hips.

b. the angle of attack in which the wingsuit flies in the relative wind.

c. the amount of tension applied to the fabric wings of the suit.

Team Fly Like Brick (Jarno (Mc)Cordia, Costyn van Dongen, and Alejandro Lopez Arce) fly wingsuits. Special suits with inflatable membranes between the arms and legs, which turns the human body into a big wing. No engines, no rigid structures. Just pure human flight.The team has put together a Wingsuit Instruction Manual. Check it out!

Wingmen in Transformers 3 - Dark of the Moon

Michael Bay’s Transformers: Dark of the Moon promises some thrilling wingsuited, skydiving action, and in a new behind the scenes featurette you can learn more about the daring sky jumpers tapped to execute film’s aerial stunts. J.T. Holmes worked for 4 months as a wingsuiting stuntman, he said that it is the best stunt he has ever had in his life.

The Quest for Wingsuit Landing - The race is on!

Jeb Corliss is one of the most experienced wingsuit pilots in the world. He's planning on wingsuit-only landing after reaching terminal velocity without having to use his safety parachute.

The main issue with making a safe landing is that wingsuit pilots descend not only downward but also forward, due to the gliding action of the wings. Jeb's team is counteracting this problem by having designed a Nordic-ski-jump like runway in which Jeb will be able to slide and come to a stop with no shock.

Loic Jean-Albert, the flying dude, is not very optimistic as he said: "You might do it well one time, and try another time and crash and die". More details in this NY Times article Flying Humans, Hoping to Land With No Chute.

The Wingsuit Landing Project, as it's been called, is expected to take place as soon as this year. However, Mr. Corliss is not alone, at least half dozen groups around the world are working secretly to achieve the same goal. Who's going to do it first? And how? Stay tuned.

Is There a Better Way to Land Smoothly?

Daniel is a very experienced hang glider and paraglider pilot with a rather deep understanding of aerodynamic principals.

He thinks the "magic" qualities of the flying could be extended considerably by extending glide ratio, even if by just a little.

In his own words: "The bi-wing design should be a matter simple to start with small additions as an experiment, and increase the area of the second wing little by little to see what is most practical. But the bi-wing needs to be placed ahead of the lower wing (the arms) somewhat, and I believe that the rear opening between the wings needs to be a little less wide than the front area between the wings. That is how they do it on bi-wing aircraft".

Are flying foxes the key to landing? - See how smooth they are!

Flying foxes are the biggest members of the bat family. Pteropus poliocephalu in latin. These bats have gone beyond the gliding and parachuting abilities of flying squirrels, lemurs, or possums. Their wings act like webbed hands. The bat can move its wings like we move our fingers enabling it to change its wings' shape rapidly to dart, flip, and turn quickly.

Who Will Be The First to Land?

Did he really land it? - Check for yourself!

A British stuntman jumps out of a helicopter and attempts to land safely without a parachute.

Jii-Wings is a cutting-edge company led by wingsuit designer Maria von Egidy. Maria has a few inventions under her belt, but it was in discovering the possibilities of human flight that she found true inspiration and a meaningful application of her skills. Click on the picture to read more about her Glide System 1.

Adrenaline Rush (IMAX) (2 - Disc WMVHD Edition)
Take a thrilling look at the world of skydiving and base jumping - parachuting from a building, a bridge or a cliff. Thanks to a camera strapped to one of the professional jumpers who took part in the film, you can also live through a 4,265-foot jump from a legendary Norwegian cliff.
Buy Now

Connect To The Source

Would You Try It?