Alexandrite is a rare and beautiful gem which has the unique characteristic of appearing green like Emerald in the daylight and glowing red like Ruby in artificial light. This color changing gemstone belongs to the Chrysoberyl Gemstones family which also has Cat’s Eye. This color change is referred to as the alexandrite effect. The unique color in alexandrite is as a result of the Chromium content. This gem was discovered by the Finnish mineralogist Nils Gusaf Nordenskiold in 1830 in the emerald mines near the Tokovaya River in the Urals and was named in honor of Czar Alexander II as it was discovered on his birthday. The chemical formula of Alexandrite is Beryllium Aluminum Oxide (BeO Al2 O3). This stone has a hardness rating of 8.5 on the Mohs scale. Alexandrite is the June Birthstone (the others being Pearl and Moonstone) according to the modern birthstones list. It is also a good gemstone for those born under the Zodiac Sign of Gemini and Scorpio. Alexandrite is the wedding anniversary gemstone associated with the 45th and 55th year of marriage. Because of the rarity, color change and high hardness it is also one of the most preferred stones for jewelry. Alexandrite rings are exceptionally beautiful and many are seen picking it as engagement ring because of its uniqueness. 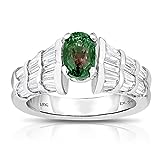 Does the Alexandrite stone have special powers and healing properties? This stone is believed to draw luck and good fortune and is often used in love spells and rituals. It is also considered a stone of very good omen and also supposed to strengthen the wearer’s power of intuition. This gemstone is also reputed to aid creativity and inspires the imagination. Alexandrite is said to help balance one's emotional state, to provide confidence, to increase self-esteem and to help bring about change. It is also said to bring happiness and success and to intensify feelings of love and sensuality. This stone is also said to be useful in treating pancreatic and spleen problems as well as the regeneration of neurological tissues and in treating Leukemia. It is also known to improve the disorders of central nervous system.

Natural alexandrite is rare and expensive. A genuine stone weighing over 2 carat is hard to find. If you see a bigger stone with no inclusions and low price it is probably synthetic (lab made). Since this gem is both rare and expensive the stone is normally cut in round or oval cut to ensure minimal wastage. However, other cuts like cushion, square princess etc are also used at times. This stone is generally sold untreated and unheated in the market as there are no known treatments to enhance the beauty of this gemstone. Alexandrite is found in many places including the Ural Mountains in Russia, Andhra Pradesh in India, Brazil, Sri Lanka, Tanzania, Myanmar, Madagascar and Zimbabwe.