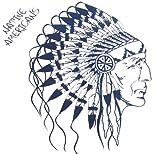 Tattoos of American Indians cover a wide range of topics, as you can have the usual heads to a plethora of combinations, usually including feathers, animals and/or something spiritual.

Almost every tattoo design for American Indians has a feel of a message and something underneath the surface, even those which include the tattoos of the faces alone.

Other tattoos include a collage of sorts, like the face of a person along with those of animals or eagles which were an important part of American Indian life; whether as symbols or a food source.

One thing I discover when I look at these tattoos is of a people and lifestyle that existed one time that is largely lost now. It seems to be reflected in the images and designs we see below.

Whether for symbolic, spiritual or just a desirable tattoos, these tattoos are unforgettable.

Lastly, when you view the various images, you'll find a different look on some because they represent different tribes.

We'll begin with this tattoo that is just full of detail. From the headband to the neck piece, it's very well done. But my favorite is the hair blowing across the face. It doesn't get much better than that.

The hardness of the face from the difficulties of life and the feathers hanging down the side are very compelling indeed. Great tattoo.

I really like this tattoo as well. What was especially appealing below was the way the feathers were designed on the head piece. The way the empty space between the head and the end of the feathers is put together really works. Unique.

Usually not a fan of color and tattoos, this tough of red on the hat, as well as discriminantly sprinkled around the face adds a nice touch.

The tattoo below was a little different in that it doesn't have the intensity of the eyes the others head tattoos have. I also like the way the braids of the hair look at the bottom.

My favorite in the tattoo below is the consistency of the lines, whether in the face or other parts of the tattoo. They flow together nice.

What can I say about the tattoo below. I've got to get me one of those hats! Seriously, the detail on this is amazing, and would have been hard to do in such a small space. Good job.

The tattoo below had one of the more noble looks I found among American Indian tattoos. It was captured really well.

The tattoo below is probably my favorite of those head designs, not because its more detailed, but probably the subject matter itself. I like the braid coming from the back and hanging over the chest, as well as the position of the feather. Really works.

I thought I'd include a couple of tattoos of Indian maidens. The one below is decent (although I don't like the eye on the right), but it almost looks too much like a modern woman with some feathers, rather than what a real Indian woman would look like. Still, overall an attractive tattoo.

Here's another nice tattoo of an American Indian woman. This one is much better, and a very detailed design. You get the feel of an untamed woman when you look at her.

I think this is a very beautiful and tasteful image of an Indian woman. But this one, and the two above must have been designed by a young male, as the faces all appear to be out of a modern fashion magazine, rather the woman of that era.

The one below has mascara and lipstick, definitely a strange combination when including the overall image. Too bad, as the rest is really nice. Even with that, it captures the beauty of the spirit, and that's worth it.

Here's one tattoo I mentioned in the beginning of the article, where it includes some of the most important animals and bird associated with the lifestyle of Indians. Good detail. I like the shadow on the face of the man.

Below is a very different look at an Indian with an animal. This time the horse, another very important part of the Indian way of life. Color works in this case.

What an incredibly detailed tattoo below. You just got to take it in to appreciate it. The feel of him standing on a pinnacle after a battle which it appears he may have lost his woman is a powerful image.

What a different type of tattoo below, as all of those above are. I'm not sure what is being conveyed here, maybe someone in the comments below could enlighten the rest of us if they know. But I do know great art and design, and this one has it.

Normally I wouldn't include this many photos in an article, but there were so many compelling and unique American Indian tattoos, that it would have been a shame to keep any of them out.