It is a popular myth that Chinese, Korean, Vietnamese, and Japanese women all have pin-straight hair. While many of them do, wavy and curly hair appear in these cultures as well.

Korean-American Jamie Chung first came on the scene in The Real World: San Diego, and has since propelled her career endlessly upwards. While she often wore her hair straight on the show, she can usually now be seen wearing her hair wavy or curly. She is also popular for wearing ombre or two-toned hair at the same time.

Vietnamese-American Tila Tequila has rocked the scene since 2007, when A Shot at Love aired on MTV. Tila's hair is naturally wavy, and by using a combination of styling tools and hairpieces she can usually be seen sporting ultra curly blonde or brown hair. Tila, along with Jamie Chung, shows off the most versatility in her hairstyles. 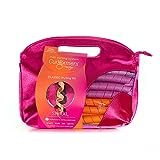 Korean-Canadian Sandra Oh, best known for her Grey's Anatomy role, has naturally curly hair, and is very rarely keen to straightening it. She most often can be seen wearing it down and full.

Koreans tend to have the highest percentage of naturally curly hair among Asians, even if that still is a low percentage. Sandra has been blessed with this trait.

I highly recommend Curlformers, which work even with very fine hair.

Do you have naturally curly hair?

Half Asian and half European Lindsay Price is also mostly seen wearing wavy or curly hair, from very short to very long styles. The soap opera actress has naturally wavy hair, but was seen wearing it straight in 2012. Her fans have expressed that they love her with curly tendrils the most.