The Status Handbag and the Modern Woman a Love Love Relationship

The disco queens from Essex are famous for dancing in circles around them, ladies notoriously congregate in wash rooms clutching them. Men obediently sits in expensive boutiques, protecting them, allowing wives, daughters and sweet hearts time and a free hand to sort through mountains of glad rags.

Little girls play house carrying them, Maggie Thatcher, 'the iron lady' would never leave home without one. Hillary Clinton admits a fetish for them. Old ladies are known to beat attackers about the head with them, Sex in the city wowed us with them. Burberry, Louis Vuitton, Gucci, Prada, Dior, and Versace continue to dazzle us with them. These branded accessories are so sort after by the female population, not only do the designers and manufacturers make millions each year, but the fakers also do a roaring trade in replicas.

Yes my friends, we are talking bags... big bag, small bag, pretty bags, ugly bags, saucy bags, shoulder bag, cross body bag, travel bags, purses, and of course, almost as a rite of passage, the every girl must have one, yes! the designer fashion bags.
What is it about women and their bags? .... generations of men are known to struggle with this question, they shake their heads, bless em!!.. 'why don't women just carry their shit in pockets like men do?' they asked bewildered.

But men just don't get it. We don't feel complete without our bags, most women without their hand bags are like ex-smokers who no longer know what to do with their hands, women without a bag feel equally lost, especially in social settings. The handbag has become a virtual extension of most women, second only to the other great extension of the 21st century, the omnipresence iphone?

The modern woman is very much attached to her bags, be it over the shoulder, hand held, or backpack, drawstring, envelope, tote or hobo. But is this bag thing a modern phenomena? Well no, not really, bags were originally made of leaves and wood, and get this.... Men were the first handbag carrier, even boys need somewhere other than pockets to carry their shit.

Men were first to carry bags

What's in your hand bag 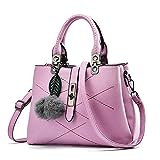