Bloodstone: Information, Meaning, Value & How to Care for

What Is Bloodstone & Where Can It Be Found

Bloodstone is dickite or kaolinite found in cinnabar bands, it is a type of stone featuring the scarlet color that is redder than vermilion. Because the redness is exactly the same as chicken blood, people name it heliotrope (chicken blood stone by the Chinese). Cinnabar is found in all localities that yield mercury, notably Puerto Princesa in Philippines; Almadén in Spain; New Almaden and New Idria in California; Idrija in Slovenia; Giza, Egypt; Huancavelica in Peru; Murfreesboro in Arkansas; Terlingua inTexas, and few other places. In China, bloodstone was first found in Yuyan mountain in Changhua, Zhejiang. Later Bahrain blood stone was found in Balinyouqi, Chifeng city of Inner Mongolia. In the 20th century, bloodstone was also discovered in Shaanxi, Gansu, Sichuan, Hunan, Yunnan and other places in China. Now that the Changhua cinnabar (mercury) mining is near its end, the blood stone output is very limited, which lead to ever increasing market prices.

What Factors Affect Colors of Bloodstone

When cinnabar (mercuric sulfide) penetrates into kaolinite and dickite, the result is a naturally blended stone from the two which is very rare around the world. The blood part is composed of mainly mercuric sulfide, while the base stone is either kaolinite or dickite. Its hardness is 2-3.The stone is often mixed with a small amount of spotted mercury and grains of quartz on the surface. In addition to mercuric sulfide, the blood also contains other coloration elements like iron and titanium, they are the darker dying ingredients and the main factors bloodstones showing different reds. Additionally, the bloodstone also contains different photosensitive elements such as selenium and tellurium, they are the main reason why the color fades or changes under the light and heat. 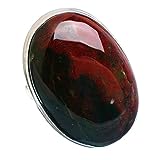 Bloodstone has various colors, it can be red, pink, purple, dark red, etc., the most valuable is the bright red with the "blood" appears to be actively flowing. In China, it is mainly used as a seal or crafting material. High grade bloodstone is mostly appropriate as a seal, so to speak, any bloodstone has been carved as a sculpture is not of high quality, since the purpose of carving it is to cover the natural defects.

The stone has eight basic colors, which blend or combine in different layers: red, black, white, yellow, green, blue, gray, and purple. The ingredients vary from 2 to 7 in hardness, making it a very difficult stone to work with.

The best jewelry-grade bloodstone is solid green with deeply saturated color and highly visible red spots, yet most pieces have only tiny red spots, some have no spots at all. The more blood the higher grade in general. Most bloodstone is treated to a highly polished finish to enhance its value. Bloodstone is often cut into round or convex (cabochon) beads to make necklaces and pendants. It is also made into rings and bracelets. 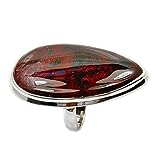 Bloodstone is called chicken blood stone in China, it gets its name for its bright red color, resembling fresh chicken blood. Chicken blood stone found at Yuyan mountain of Changhua, China began its development back to the Ming Dynasty, flourished in the Qianlong period of Qing Dynasty, it's been 600 years of history. Bloodstone is beautiful and rare, and has always been crowned as "queen of stone", "princess of seal stone", and "queen of seal stone".

During the establishment of diplomatic relations between China and Japan in September, 1972, Premier Zhou Enlai of the Chinese Government presented a pair of valuable seal, originally stored in National Palace Museum, to the Japanese Prime Minister Tanaka. This symbolic action caused great repercussions in Japan, Southeast Asia, Hong Kong and Macao region of China, and set off a chicken blood stone boom. Later, large number of Japanese tourists must purchase this chicken blood stone as the preferred gift and take them back home. The Chinese had also built up the greatest enthusiasm in collecting and invest in chicken blood stone ever since.

As with other ornamental objects, the value will be based primarily on artistry and workmanship. You also need to take any antique value into consideration. 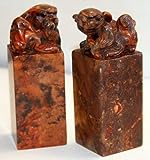 A Legend from Ancient China

Once upon a time, there was a bird called "Bird Lion" that was naturally aggressive. One day, the bird saw a female phoenix hatching when he was flying over Yuyan mountain, and immediately came up with some evil thoughts and began to attack her. The leg of the unprepared female phoenix was snapped apart. Male phoenix arrived after hearing the news, and began to fight against the evil bird. The bird lion was defeated in the end. Although the phoenix claimed victory, the female phoenix was bleeding, so much that the blood stained the entire Yuyan mountain, and the mountain gradually turned into chicken blood stone.

In China, chicken blood stone is a wonderful piece of art in ornamental stones and one of the most prized ornamental materials. Since the color red is the symbol of good luck, the Chinese tend to present everything in red color including giving red seals or chicken blood stones to bless people for events marriages, birthdays, promotions, and success. Chicken blood stone is always one of the greatest gift ideas in such cases and it never goes out of style. Appreciation and evaluation of chicken blood stone in the modern world are mainly constrained by human's visual, psychological factor and quality of a stone. In the past, the value was pretty much seal-based, and nowadays it is much more for visual appreciation based on a stone's appearance and grade. There are many different angles and evaluation methods, it's all a matter of opinion.

Bloodstone is thought to cure blood disorders and seal wounds. The stone can supposedly renew relationships and bring courage, calm, rational thoughts, abundance and good fortune to its wearer. Its use in powder form in Indian folk remedies is why gem-quality bloodstone is so hard to find.

Never expose the stone to the sun - Since the color will turn brown when exposed to the sunlight, you should always be careful not to put the stone under the sun, it is the bright red gives bloodstone its distinct appearance and any darkening will lower its value.

Care need to be taken when cutting this material. Cinnabar contains mercury sulfide (HgS), which is highly toxic.