History of Cameos and Cameo Jewelry

What is a Cameo?

Cameo is a method of carving a piece of jewelry or other object with a raised relief, and where the colour of the relief contrasts with that of the background.

This is achieved by carving a piece of material with a flat plane where two different colours meet, taking away the entire first colour except for the image and leaving the background as a contrasting colour.

During the course of history cameos have been used to depict rulers and famous leaders. In addition, famous leaders, like Alexander the Great, had them carved portraying themselves as gods.

Mythological and classical themes have also been popular in cameo carving and a lot of the modern ones are images of a beautiful woman in profile.

Nowadays a lot of cameos are carved from seashells, a production method that started in the fifteenth or sixteenth century and made popular in the time of Queen Victoria.

These days’ helmet shells from Madagascar and South Africa are the most commonly used shell and the main centre for carving from seashells is Torre del Greco in Italy.

The seashells are first marked with a series of ovals and then cut into a series of oval blanks. The highly skilled carver then uses a metal scraping tool called a bulino for the bulk of the carving of the cameo, and then a number of different gravers are used to complete the job.

A grinding tool is used for faster production and when the cameo has been finished, it is soaked in olive oil, washed with soapy water and then polished with a hand brush.

Modern cameos can also be produced from layered agates. The most popular colour combinations are white on blue, white on black and white on red-brown, and the layers are often dyed to make the colour contrast stronger. Most of the current agate ones are produced with the use of an Ultrasonic Mill.

A master design is produced by a highly skilled craftsman and the Ultrasonic Mill allows multiple copies of this master design for a cameo to be turned out very rapidly by pressing a master die on the agate blanks. A fine layer of diamond slurry is used to help with the cutting and the die vibrates ultrasonically in a vertical motion.

Cameos have been used as adornments for many things and have even been attached to military accessories such as helmets, sword handles and breastplates. They have also been used to ornament vases, dishes and cups.

Cameos were used as decorations in houses in Roman times and later in Georgian houses in Britain. As well as being carved from shell and hard gemstones such as agate and sardoynx, they have also been carved from the volcanic lava of Mount Vesuvius and in jet from Whitby. 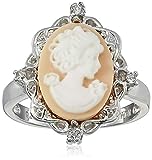 The Origins of the Cameo

The origins of cameos go back into our distant past and to the development of ancient carving techniques which allowed figures, known as petroglyphs, to be carved into the rocks as long ago as 15,000 BC.

True cameos, which are carvings in relief, were first produced in the Egyptian port of Alexandria in around 300 BC.

This development was generated from the introduction of the sardonyx, a multi-layered gemstone, into Egypt and Europe from India and Arabia.

These cameos created a picture from the lighter, upper layers of the stone which stood out from the lower, darker layers. The ancient craftsmen used simple belt driven drills and carved the finer details with hand held metal gravers.

An amazing example of bas-relief carved in sardoynx is the Farnese Cup, named after the family who acquired it in the fifteenth century. The Farnese Cup was carved around 150 BC and had the head of the gorgon Medusa complete with snakes carved on the underside of the cup.

It was believed in ancient times that having Medusa’s head carved on plates and drinking vessels would protect the person using them from being poisoned.

The Greek and Roman cameos were commonly carved with images of gods and goddesses, mythological symbols, and portraits of beautiful women. In ancient Greece, young women would use cameos carved with an image of the Greek god of love, Eros, on them to express their desire for a young man.

They also became very popular in Roman times. These antique cameos were placed in jewelry or created as portraits to hang on the walls of wealthy Roman’s villas. Many rich Romans owned Greek slaves who were skilled stone carvers who were set to the task of carving intricate cameo’s for their masters.

An exquisite example from the Roman era is the Gemma Augusta, which was carved in honour of the Roman Emperor Augustus and another is the Grand Camee de France jewel that was carved by Dioskourides in 25 BC.

History of Cameos from the Renaissance

The art of carving cameos was largely lost during the Dark Ages and it wasn’t until the Renaissance brought a renewed interest in classical history and mythology that the lost art began to be relearned.

It is believed that seafarers from around the Bay of Naples began this process by carving sea shells into cameos during long sea voyages.

In Renaissance Italy, Pope Paul II was an enthusiastic collector and his fascination with cameos might even have played a part in his death as he loved to wear intricately carved ones on his fingers as rings. It is thought that wearing these cameo adornments led to his hands becoming so cold that he caught a chill and died.

Elizabeth I of England was supposed to have given cameos to her favoured loyal subjects as a sign of her regard and esteem. The best craftsmen that were carving them during this period were in Rome and Florence. During the 17th and 18th centuries cameos were collected by the nobility as a sign of wealth and prestige.

Napoleon was also another lover of these jewels and he even wore a cameo on his wedding day and established a school in Paris that took in apprentices and taught the art of carving them.

The Russian Empress, Catherine the Great, was another who had an impressive collection of cameos.

During the 18th century the English potter Josiah Wedgwood, started creating his famous blue pottery and also made Wedgwood cameos in two parts from jasperware ceramics in many different sizes and using lots of different profiles.

Cameos in the Victorian Era

The earliest seashell cameo’s date from the Renaissance and were usually white on a grey background, and these Victorian ones were carved mainly from cowry or mussel shells.

By the mid-18th century, shells from the West Indies were also being used, especially helmet shells and queen conch shells. It was also during this 19th century period that profiles of beautiful women on cameos started to predominate.

During the Victorian era the carving of these jewels in the likeness of the owner also became very popular. The Victorian era saw the introduction of mass production and industrialisation, and so cameos could for the very first time be worn as jewelry by ordinary people.

If you are a fan and wish to choose some jewelry, either for yourself or as a special gift, you will find a huge selection both in stores and online.

There are many contrasting colours to choose from, with the white on black, white on red-brown and white on blue colour combinations still being the most popular. The most popular image is still the profile of a beautiful woman.

This beautiful jewelry can be found in many different styles and to suit every budget. Traditionally, the pendants were worn on black velvet ribbons around the neck, but you can now get them attached to ribbons or chains.

Choose from cameos set in gold and silver, and from a huge range of brooches, earrings, rings, bracelets and necklaces. Remember that when you wear your gorgeous jewelry, you are following in the footsteps of many mighty rulers and fashionable beauties from centuries gone by.