Kelly is an avid collector of Camrose and Kross jewelry. Her writing on jewelry centers around history and art.

Castellani was a famous Roman goldsmith who not only crafted new jewelry, started new trends and also celebrated antiquities. Many of his pieces were inspired by antique jewelry from Egypt, some were even carefully crafted with the Egyptian jewelry serving as the centerpiece of his new piece of jewelry. This designer was more than just a goldsmith, he celebrated his predecessors and went on to design the most famous bracelet of all time.

Ironically if you look at the mark of Castellani jewelry with its back to back C's, the mark is reminiscent of another famous design - Coco Chanel.

Why the Strong Celebration of Egyptian Jewelry?

Castellani was renown for celebrating Egyptian jewelry. One of his clients was Henry Layard who excavated ancient Assyria.

Castellani's designs were light years ahead. In fact, in many respects Castellani was more than a goldsmith, more than an artisan, he was an inventor with an eye to design.

He is credited throughout history as an innovator of art. He crafted some of the world's most important pieces of jewelry crafted with an ancient technique of micro mosaic. He then combined it with gold lettering and the technique was called Tessarae. Don't take my word for it, hear firsthand from renown historians who detail the contribution made by Castellani and his staff.

1870 and 1880 in, what is called, the Castellani's "Periodo Moderno", a period in which Castellani's master goldsmith and designer Michelangelo Caetani, was strongly focussed on designing micro mosaic jewelry with Greek and Latin text.

"A key motivation for the Castellani interest in reviving the styles and techniques of the ancient Romans and Etruscans was the rising nationalism that would soon lead to a united Italy. In accordance with their political beliefs, the Castellani were genuinely committed to promoting the cultural significance of Italy at a time when French and English taste predominated."

"One of the distinguishing characteristics of the 19th century was a reverence for the past. This was the age of the Grand Tour, when the popular imagination was sparked by visions of antiquity, the Middle Ages, and the Renaissance as the refined upper classes returned home bursting with information and purchases from their trips abroad. In Italy, ancient gold Etruscan jewelry was turning up in excavations, and society women were captivated by its beauty. Roman jeweler and art dealer Fortunato Pio Castellani saw his opportunity and swiftly presented the public with an easy alternative to the ancient by developing a chemical method to reproduce the warm, deep yellow tones of the ancient gold."

The famous Castellani bracelet is made of a jewelry process called "tessarae" which essentially is a micro mosaic process that is overlayed around a gold letter. So what exactly is "tessarae"?

Tessarae is "a small block of stone, tile, glass, or other material used in the construction of a mosaic."

Inscription on the Italian bracelet - double-sided.

One of the many beautiful items about the Castellani bracelet is beyond the physical beauty of the bracelet and the love story behind its commission. The bracelet actually says in Latin a promise - a strong promise of love and commitment. The saying does not promise unconditional love, it does more than that - it promises to always to there for one another. What could be more significant than this statement? What could possibly be more beautiful than this simple sentiment of true love and commitment?

Moth Necklace in Micromosiac by Castellani

"This Castellani necklace was commissioned in 1872 to mark the engagement of Turin noblewoman Carina Gamba. The pendant, referred to as a “bulla” (a hollow pendant introduced by the Etruscans, and possibly used to hold a protective amulet), is hinged at the top and decorated with granulation and wirework. At the center is an extremely fine micromosaic of a moth, a symbol of the soul."

When Henry Layard married Enid, he was 52 years old. He had excavated Assyria and commissioned several pieces crafted from some of the seals he had excavated to be re-purposed into jewelry for his new wife. Her pieces of fine jewelry, many of which were made by Castellani reside at the British Museum.

Ladies Who Received the Castellani Bracelet "The Princesse de Broglie died of consumption at the age of thirty-five. Her bereaved husband kept this portrait behind draperies in perpetual tribute to her memory. It remained in the family until shortly before it was acquired by Robert Lehman and retains the original, ornately carved frame that Ingres himself selected."

Other Delights by Castellani

The mansion that houses the Princesse de Bagatti's bracelet will be open to the public beginning Spring 2015.

This may serve to put one of three existing bracelets on public display.

For more information on the museum: https://www.milanmuseumguide.com/museo-bagatti-valsecchi/

"The third was commissioned for Princesse de Bogali of Milan by her husband. The Princesse died thirteen years prior to having the bracelet made. As an eternal expression of his love, he paid Castellani three times the value of the bracelet to never make another. He installed a portrait of his wife and the bracelet in an empty room in his home in Milan to honor her memory. That room is still kept intact as he left it by their descendants."

Location of the Female Recipients of the Castellani Bracelet 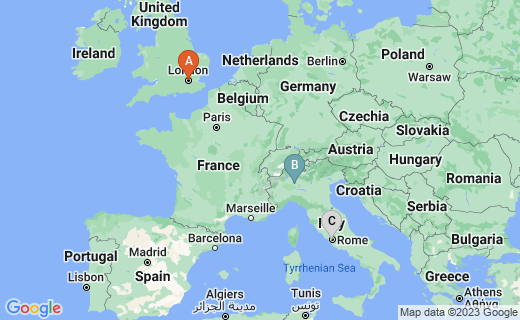 Have you heard of or seen this bracelet before?

My Story - My Indulgence

I had heard about this bracelet for years. I had seen it dozens of times and yet somehow it didn't appeal to me from afar. I delayed and delayed. I finally convinced myself as the mold for the bracelet was being destroyed that this was a piece of history that I must own.

Then a remarkable thing happened, the bracelet arrived and to my surprise, the bracelet is simply magical. It has a weight and texture to it unlike anything I have ever seen. Television does not do justice to the micro mosaic called Tessarae. The bracelet is stunning. It makes any tennis bracelet look boring - trust me this bracelet is a show stopper. And to think I purchased it for its history! To my delight, this is my favorite piece of all my Jackie Kennedy replica pieces. Like Layard, I would have paid three times the amount for the bracelet - although my budget is three digits and at that low three digits at under $100.

Update, I continue to wear this bracelet at least once a week. I prefer to wear it paired with a yellow bracelet my husband purchased for me.