The Celtic Cross and other Celtic symbols all originated from the famous "Book of Kells". This illuminated book was created by artistic monks sometime after 500 A.D. The beautiful Celtic art and these illustrated manuscripts have stood the test of time and they are one of the most popular tattoo art styles in the world. The tattoo world has embraced this classic art style and traditional Celtic symbols, making some of the most unique tattoo designs in the world.

Celtic art consist of knotwork and spirals that have no ending or beginning. These circular lines and spirals never cross one another. These specific Celtic patterns hold deep symbolic meaning. This type of Celtic art represents the "Circle of Life". It symbolizes the never ending cycle of life. The Celtic Cross is the perfect tattoo choice to represent life and all the different paths that we take.

With all the different associations to religion, faith, and God, the Celtic Cross tattoo is the perfect tattoo choice for those who want to symbolize their faith in Christianity. It is appropriate and it represents everything that a Christian believes in. The Celts were very religious and they were very passionate about their beliefs. The Celtic Cross is a powerful and meaningful tattoo symbol. 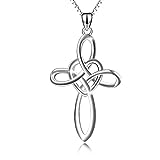 The Celtic Tattoo is also a great way to represent your Celtic heritage and Celtic roots also. In the tattoo world, Celtic art is very well known and recognizable. For those who are of Celtic decent, many choose to get Celtic art tattoos and Celtic symbols to represent their love for their native heritage and lands. The Celts occupied land in Ireland, Greenland, Scotland, and spread to a variety of different European communities. Not only did the Celts personally move, they brought their rich traditions and practices with them as they traveled all across Western Europe.

There are a variety of different symbolisms associated to the Celtic Cross. The Pagans believed that the Celtic Cross was a symbol of the sun. The Pagans highly respected the sun and everything the sun created. Ancient Pagans viewed the sun as the source of life. They knew the sun created all the life that was around them. To some, the circle in the cross can represent the sun.

The Celtic Cross has also been associated to everything in nature as well. This meaning can also been seen in the "circle of life" meaning that some ancient Celts gave to the Celtic Cross. It is believed that the spirals and circular lines in the Celtic Cross represent the four seasons and the circle in the cross represents religion. When it refers to religion, it means that it symbolizes God.

Some Celtic Cross tattoos have Celtic art within the cross while others have the entire Celtic Cross done in Celtic art. The Celtic art used to create the Celtic Cross can be done in spirals, mazes, or knotwork. There are all kinds of different designs and patterns that you can choose from. Celtic art is beautiful and creative, which makes for a great unique tattoo.