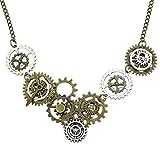 Steampunk is a visual style based largely on the Victorian era. It takes a specualtive look at what might be if the past was set in the future. The term was coined in the 1980s, created to define a genre of novels and a small subculture growing around the idea.

For example, one common theme in Steampunk is the development of steam (rather than electicity) as our primary form of power. Other steampunk ideas include questions such as what would the computer look like if it were invented a century earlier?

Steampunk fashion draws largely in Victorian styles and asthetics.  However, unlike the stayed, demure Victorians, steampunk takes many liberties that would have gotten Victorian women banished to the bordellos like shirt skirts and open shoulders.  The style also includes many mechanical motifs, such as watch gears and other cogs.

As steampunk grows in popularity, more and more wonderful free patterns and tutorials are popping up all around the internet. These resources will help you assemble your own DIY steampunk costumes using easy techniques and basic, inexpensive materials.

Aviation accessories are popular in steampunk garb, especially goggles. There are dozens of innovative ways to create your own goggles - this one uses mason jar rings in an ingenious design. Other DIY steampunk goggle designs use bottle caps, plumbing parts, deadbolt casings, or any other appropriately sized circular pieces.

Looking for a different twist on steampunk goggles? Check out this masquerade-style mask-on-a-stick with steampunky goggle styling. Masked ball, anyone?

How to Make Spats from Threadbanger