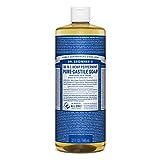 I have an embarrassing and painful problem. Since childhood I have had terrible itching in my groin area. Sometimes the itch was so fierce I would literally scratch until I had removed layers of skin leaving it red, inflamed and very sore. I went to doctors who told me to change to ‘free” detergent for washing my clothes. They also suggested I wear loose fitting underwear and use mild body soaps. I tried them all and still I was plagued with the same problem. The only thing that brought relief was cortisone. I had to apply cortisone every day or the rash , itch and soreness would return. Nothing else worked.

I was worried because I had read that too much cortisone on a regular basis could itself cause problems. I did not know what else to do. The cortisone was the only thing that helped. I tried not using the cortisone and my rash and itching would return in just a few days. Finally, my wife bought Dr. Bronner’s Magic Soap the Eucalyptus variety. I tried it and it make my condition worse. It burned my skin and made me itch even more. I went back to cortisone. About two months later my wife bought Dr. Bronner’s Magic Soap in Hemp Lavender. I had no intention of trying it after my experience with the eucalyptus variety and it stayed unused by me for several weeks. Then one day, I was taking my shower and my regular soap was not in the shower. The only soap in the shower was Dr, Bronner’s Hemp Lavender. I had no choice so I used it. That day I did not experience any itching. I went to bed and still did not itch. The next day I used the soap again, and had the experience of no itching. I tried this for a week and my skin cleared up and I stopped using the cortisone.

I have been using the Hemp Lavender now for several months and I am a happy guy. The itching has stopped, my skin is fine and I rarely use the cortisone. I do not honestly know if this product will work for you. I am not trying to sell you anything. All I am saying is it has brought me relief from more than 50 years of torment.

To View My Articles:Dirt To Dollars