Eyeshadow Foiling: What It Is, How to Do It, and Why It Can Make Any Eyeshadow Beautiful

Alisha Adkins is an author of horror and speculative fiction. A self-described "aging goth," she has a strong interest in creative makeup.

Eyeshadow Foiling: What Is It?

Foiling is a relatively new cosmetic trend that involves spraying a mixing medium onto an eyeshadow or pigment to transform its appearance, increasing its pigmentation and giving it a metallic, tin-foil-like finish.

What You'll Need to Foil

Makeup Geek: How to Foil Pigments

How to Foil Eyeshadow

Foiling eyeshadow is actually quite an easy process to do. Just scrape off a bit of your desired eyeshadow onto your mixing surface. Spray some of your mixing medium (about 2 sprays) over it. Mix it with your flat, stiff brush into a paint-like consistency. Then paint over your eyelids with the brush. Wait for it to dry (this can take a couple of minutes) before trying to blend or add non-foiled eyeshadows. The foiled eyeshadow will dry down to a manageable powder finish, but while it is wet, you will not be able to work with it.

My Adventures in Foiling

As with any medium, there is a little bit of a learning curve when foiling.

My first attempt was not entirely successful. I found myself painting with makeup; it wound up getting away from me and ended up just looking kind of weird. But hey, that's what makeup wipes are for, right?

For my second attempt, I used some extremely lackluster Almay eyeshadows I had been intending to throw away.

And suddenly, just like that, I was in love with foiling. It makes crappy eyeshadow useful! Why You Need Foiling in Your Life

Foiling is the next big thing right now in the beauty world simply because metallic shadows are popular, but it has more pragmatic uses.

The real reason to foil is this: you know all those eyeshadows you've bought and then regretted purchasing? You know, the ones that have little to no pigmentation that just sit in the bottom of your drawer? Well, now they may actually give you some color pay-off!

And, on top of that, there's yet one more reason to venture into foiling -- a far less utilitarian, but more creative, one. When you take dry eyeshadow and turn it into wet pigment, you have the opportunity to mix your shades. In other words, you can mix two different eyeshadows (or more, I suppose) together to create your own shades.

Foiling is such an exciting innovation because it really elevates makeup's creative potential.

With some imagination and practice, foiling may bring your makeup to new levels of artistry. 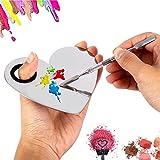