When it comes to popular tattoo designs, the fairy tattoo ranks among some of the top designs. Fairy tattoos are very popular among women and a small portion of men also choose the design. Fairy tattoos are chosen for a few different reasons, but they are mainly chosen for their symbolic meaning and beauty. Fairies have been portrayed in movies, books, television, mythology, and other legends. At this point in time, the fairy is well known and portrayed as a child-like character. In fact, fairies have been associated with children and babies for centuries. Although the fairy is now portrayed as a positive human-like creature, it hasn't always been that way. In fact, through legend, many people feared the fairy and the fairies bad omens.

When we look how the fairy has been portrayed over the past few decades, we can then begin to understand their symbolic personalities, characteristics, and meanings. When we look how fairies have been portrayed in recent years, they are known to be helpful creatures. They offer children and humans a route to their magical land through their magical powers. Fairies are often very small and have special features that make them distinct, such as their wings and their pointy ears. In fact, they have many human like qualities. They are also considered to be good luck, but that hasn't always been the case. Good luck tattoos may portray a fairy with other lucky symbols, such as horseshoes or ladybugs.

When we look back at legends and mythology, we notice that the fairy is none of those qualities. in fact, many people feared fairies. In many different legends and beliefs, fairies are mischievous and destructive creatures. They have been known to swap out healthy children and babies with unhealthy children and babies. In many cases, if a child became sick or weak, fairies were to blame. In other stories, it was very important to keep your family away from fairies and avoid them at all cost. The fairy had magical powers to destroy families and their property.

Most of these stories have now been forgotten and the fairy has been portrayed differently. Most of us think about "Tinkerbell" when we think about popular fairies. Tinkerbell was a good fairy that was helpful and had overall positive characteristics. This is how most fairies are viewed today. Tinkerbell tattoo designs are one of the most popular fairy tattoos. Fairies were also called pixies, sprites, brownies, and fay(fae). Fairy came from the latin word, "fata". It is associated with "destiny". This is also a symbolic meaning of the fairy tattoo. It represents the stages that we go through in life. We all go through different stages in our life at different times. We all face our own set of trials and tribulations. The fairy tattoo represents this fact.

One of the main characteristics about the fairy tattoo is beauty. Fairy tattoos come in a variety of different colors and designs. Nearly any color combination works with the fairy tattoo. Fairy tattoos also come in a variety of different styles. In some tattoos, the fairy is standing or crouching with her head between her knees. This is seen as a childish quality, which is symbolic to the fairy tattoo meaning. In some cases, the fairy is flying or she may be sitting. Fairy tattoos can look very realistic or they can be inked in cartoon form. There are many people that choose the "Tinkerbell" tattoo. Tinkerbell is a fairy that was portrayed in movies by Walt Disney. Tinkerbell tattoos look just like the cartoon figure that is portrayed in the movie. Other fairy tattoos are very realistic and look just like a human. There are also other cartoon fairies that you may want to research before deciding on your fairy tattoo.

Although the fairy tattoo is mostly worn by women, men also choose this design, but it is much different then the normal fairy design. These tattoos portray the fairy as a seductive type of woman. These tattoos usually have the fairy nearly naked or completely naked. Most of them look like the normal fairy that is depicted in this article, but some may even have a devil type fairy. These fairies may have horns and a red colored skin. But overall, most men choose the seductive mischievous fairy.

As you already have learned, the fairy has always been associated with children. Even in mythology and legends, the fairy has always been portrayed with children. Due to this, the fairy tattoo is also symbolic to children and kids. A mother may get fairy tattoos to represent their children. For example, a mother of two may decide to get two fairies tattooed on her with their names under the fairies. Fairy tattoos can also be used to symbolize the loss of a child also. A parent losing a child is the last thing they want, but it does happen. Some people choose to get a fairy tattoo to represent their loss. To them, the fairy would nearly be as symbolic as an angel tattoo would be. This also wishes the child happiness on their journey and some would like to think that they live on in a magical world. 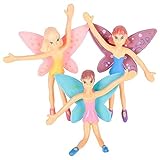 Where To Get Your Fairy Tattoo Design

There are many different things that are portrayed with fairy tattoos. Flowers, butterflies, mushrooms, petals, frogs, dragonflies, stars, and the moon can be designed with the fairy tattoo. Fairies are a very common addition to butterfly tattoo designs. The entire tattoo design is usually really detailed and colorful. The fairy is designed nearly like a human, but with a few different features. The fairy is human like, but most of them have wings and pointy ears. When it comes to deciding for your design, make sure you do your research. The fairy tattoo gives you a lot of options to be creative and create a very colorful tattoo that you will be satisfied with.

Because fairy tattoos come in a variety of different sizes, they can nearly be placed anywhere on the body. Popular and common body locations for this tattoo include the arms, hips, lower back, and the ankles. This would be great locations for women. For men, common locations include the top back shoulder, legs, and arms. You need to base your location on the size of your fairy tattoo.

The fairy tattoo design gives you a lot of options for a colorful, beautiful, and unique tattoo. Before you choose this design, make sure you check all the other designs that are available. Many people rush into the tattoo process and they end up with a tattoo that they don't like and they wish they never had it done. Make sure you take your time and choose a design that you completely like. If you feel that this design is not for you, please be sure to check out more tattoo designs and style in the links below. Thank you for visiting.