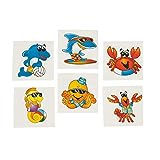 Fish tattoos are among the more numerous of all tattoos it seems, with a wide variety of species to choose from, of which the Koi fish appears to be the most popular.

With so many Koi fish tattoos to choose from to look at, along with the accompanying environment is dwells in, I thought I would go a different route with this fish tattoo designs and show mostly those we don't see as much of.

Another big fish theme I've stayed away from is sharks, which is also highly popular.

Surprisingly there are a lot of other fish tattoos out there that look great, with some of them being less exotic, and also some you would find in your fish tank at home.

Something else I discovered when looking at fish tattoos was a subset of fishing hook tattoos; something I would have never thought of looking for. I included one cool one below, but will probably do a separate article on those another time.

I said I wasn't going to focus on Koi fish in this Hub, but I though I'd slip one in there because it was unique and well done. The dark colors look really good on the fish, as Koi are usually portrayed in their orangish color with tattoos.

The clown fish tattoo below is cool, and it's neat to see it cleaning itself in the anemone. Those of you with saltwater fish tank recognize immediately what's going on here. Fun tattoo for fish fans.

We have another fish bowl favorite here with the goldfish tattoo. Nice colors, and the bubbles are particularly appealing to me.

The one below the top one is also fun, and the white tails with the red body look great.

Staying with the species of fish we have at home, here's a pair of bettas about to attack each other. You can't put them in a tank together or they'll fight to the death. But a tattoo of the fierce little predator fish is very cool.

Last, as far as the type of fish you would find in a home is the angel fish. The 3-D look is pretty nice, but is far too big for me. About a quarter of that size would be a nice tattoo, just like a big angel fish in your tank.

Here's the fish hook tattoo I promised above. Most are much smaller than this, but the ripped flesh look reminds me of years ago when I was younger and got caught by a few hooks while fishing.

I couldn't quite tell whether this was a trout or salmon tattoo below, but I really like it, and the wood in the water is a nice touch.

The dark colors of this nice swordfish tattoo are what attracted me to it. The way the artist turned its body also look really good.

It wasn't clear if the top fish tattoo below is a piranha, but the bottom one definitely is, and I like the way the artist conveyed the viciousness of the predator fish, which doesn't need any embellishment to remind us of how dangerous it can be.

Hopefully this gave you some new ideas of what's out there with fish tattoos and the many different varieties there are to choose from beyond the ubiquitous Koi and shark. I would have like to have seen a little bit more background and scenes with the fish, but there were still pretty cool.