Garnet is a semiprecious gemstone species which come in a wide variety of colors and types just like Tourmaline. This stone is the modern, traditional and ayurvedic birthstone for those born in the month of January. It is the talismanic stone for the Zodiac Sign of Taurus and Planetary stone for Scorpio. Garnet is also the wedding anniversary gemstone associated with the 2nd and 6th years of marriage and the base Chakra. The name of this gemstone is derived from the Latin word "granatum" which means pomegranate because of its resemblance in color with Pomegranate seeds. Although Garnet is normally seen in the color of pomegranate seeds, it is also seen in a multitude of other colors including red, orange, yellow, green, blue, black, pink, brown, purple or colorless because of the unique combinations of elements such as iron, calcium and manganese in the gem. Most of the varieties of Garnets are named based on their color.

Garnets are silicates and are seen in different colors. They also mostly have names based on their colors. Six common species of garnet are recognized by their chemical composition. Apart from these there are mixtures made up of more than one variety of garnets. Information on some of the popular types of Garnets is given below. 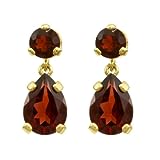 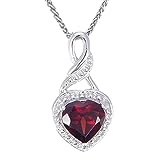 The existence of this gem can be traced back to as old as 3100 BC when garnet used to be a part of the ancient Egyptian and Sumerian Jewelry. The stone was set in shields, buckles and other items worn by Crusaders as this stone was believed to give courage to the wearer. This stone was also worn as a lucky charm by warriors of the medieval times for success and protection.

Garnet has several other uses apart from stones for making jewelry. Garnet sand is a good abrasive and used as a replacement for silica sand in sand blasting. Garnet is also used to cut steel and other materials in water jets. Garnet sand is also used for water filtration media. Garnets are said to be helpful in treating inflammations of the skin, hemorrhage, rheumatism, thyroid and blood pressure. Those having depression can put garnet gemstone under the pillow to cure it. Wearing Garnet jewelry can protect one against nightmares. This stone is also believed to regulate the heart and blood flow and aid in curing depression and lethargy. Garnet stone is also said to help in increasing the passion and sexual drive. This stone is especially helpful when searching or meditating on past lives. A garnet gemstone can help balance and stimulate the entire chakra system from the base chakra to the crown chakra.

This stone is also considered an ideal gem for wearing for Career success and building relationships as it would help increase your personal magnetism. Garnets are also known for stimulating success in business. This stone is popular as a wedding jewelry too as it is said to bring in unconditional love, happiness, passion, romance, devotion and stability in relationships.

Jewelry made with garnet gemstones are extremely popular because of its beauty and characteristics. It is ideal for jewelry making as it has a hardness of 7-7.5 on the mohs scale. However, like any other gemstone jewelry, Garnets also should be protected from scratches, sharp blows, harsh chemicals and extreme temperatures.