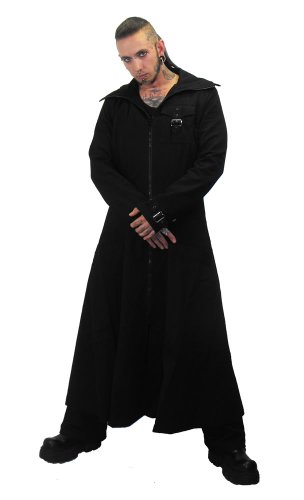 Similar to Gothic shoes and boots, Gothic trench coats work on both men and women, and keep both masculinity and femininity intact.

Trench coats have been a key part of Gothic fashion for a long time, but the Matrix films brought them out of the Gothic subculture more into the mainstream; although much of Gothic fashion has been moving in that direction as well.

Some of the more popular Gothic trench coats are made from either leather or PVC, and both styles work and look great.

I do like how Gothic fashion allows men and women to wear similar styles and yet not embrace the unisex or metrosexual look.

Each bears up well with the trench coat, and still look like men and women.

While this Gothic trench coat is called a bondage trench coat to generate interest and curiosity, other than the chains there's really no connection; but the implication is definitely there from the style.

This is a nice trench coat, and would probably look even cooler with the arms down and swaying as you walk. I think the chains and straps would really have a cool effect there.

This PVC trench coat is what you would think of when contemplating the typical type of trench coat you might see, and it easy to understand why - it's a great coat.

Shiny black always gives off a certain vibe, and this is true in this nice coat.

I included these two trench coats together (the one above also), because while they were very similar in style, the way the coats are zipped or closed are very different, and it make a real difference in the look.

Both styles are nice, but I like the one below best.

Here again we have that great differentiator among trench coats, with the clasps again being the key difference. These clasps are even better than the one's above in my opinion, and are what I would prefer so far in the collection.

Here is a set of nice hooks on this Gothic male trench coat as well. I feel like I'm continually looking at an infinite variety of door pulls and like each one better than the other after viewing them.

All of them look great, so it's largely the preference of the one wanting to wear that is what really matters.

This is a good example of how men and women can wear similar Gothic fashion and specifically trench coats, and still look male and female. Again, notice how the type of buttons or connectors make such a difference in the look of a Gothic trench coat.

This pair of trench coats present a more sleek and symmetrical look than some of the others. They offer more of a uniformity throughout the body. That is true for the man and the woman in the photo below. 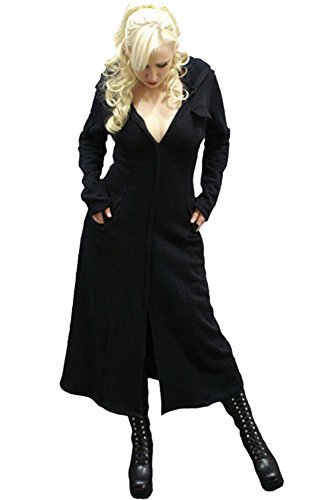 Great trench coat that looks good on the model and would on most other ladies as well. Very nice lines and could be worn in many social circumstances and situations.

In other words, this trench coat will work for those in the Gothic lifestyle as well as for those outside of it.

Here's a Gothic trench coat made of poly cotton, which would obviously be much lighter and easier to wear in the heat, where many Goths refuse to compromise with their chosen attire, and would rather swelter and sweat than wear something they feel would compromise who they are.

This coat would make it a little easier to go through the heat and still look good.

Here's my final entry for this article about Gothic trench coats, and fittingly it ends with a high quality leather, Gothic trench coat. It's really interesting to look at the poly cotton, PVC, bondage and leather materials to make the trench coats, as well as the variety of hooks and zippers included to give them a different look, even though it's hard to stand out with fashion that looks so similar.

Whether you live the Goth lifestyle or not, a Gothic trench coat is a great addition to any wardrobe, and as you can see from these photos, would look great in a wide variety of situations.

For those outside of the Goth lifestyle, for those photos which include Goth makeup, just picture it more subdued to get a better idea of how the coat may look on you.