When it comes to choosing a tattoo design, there are thousands of different designs, symbols, and styles to choose from. The eagle tattoo has many positive meanings and the eagle has been used in symbolism for centuries. Many of the meanings of the eagle can be learned by simply watching the eagle in their natural habitat. The eagle is a fearless predator that roams the sky without fear. When it comes to hunting, the use their extraordinary eyesight to track down other animals miles away. Two of the most popular meanings of the eagle tattoo are protection and freedom. The eagle is free in the open skies and free to go wherever it wishes. When it comes to their young and territory, they will fight to the death. As you will learn in this article, the eagle has been used by many different cultures throughout human life.

The eagle has very distinct features, from talons to each feather. When a tattoo artist does an eagle tattoo spot on, it can look absolutely stunning. The eagle's look is very sharp. The eagle is solid built and it appears flawless. A good tattoo artist can copy this detail and it can really make a great tattoo when it is captured correctly. The beauty of the eagle is undeniable. In America, the eagle is used on coins, money, buildings, and much more. The eagle serves many different purposes in America, but it has also served throughout history as well.

Eagles have held symbolic meaning in ancient Greece and in ancient Christianity. To most Christians, the eagle is associated with Christ. The eagle was the symbol of the Greek god Zeus. Zeus was thought to be the most powerful god. To the ancient Greeks, the eagle symbolized authority and leadership. The Mayans and Aztecs also found meaning in the eagle. In these cultures, eagle is affiliated with the sun. Many different cultures believed that the eagle has the power to look straight into the sun without blinking. The ancient Romans believed that eagles carried the souls of the dead to Heaven. As you can see, eagles have played very important roles throughout history. The eagle was sacred to many Native American tribes.

Native American tattoos also portray the eagle. They will usually get an eagle tattoo and portray something from their life with the eagle. In this article, you can see the eagle with the tee pee. Many people that choose to get the eagle tattoo often tend to use the eagle's landscape for the background of the tattoo. In these cases, you may see an eagle perched on a rock or an eagle flying. These two positions also have symbolic meaning. If the eagle is flying, it represents that you are doing what you love, life is taking off. If the eagle is perched, it means that you are waiting for your life or something special to happen, your on the verge of something. Due to all the different meanings of the eagle tattoo, it is clear to see why many people choose it for a tattoo design.

The eagle is still well represented today, just as it was in the past. As you have already read, it is a popular tattoo choice by men and women who are serving or have served in the United States military. Eagles have also been associated with the company Harley Davidson. Harley Davidson Motorcycles and eagle tattoos are closely related in their meanings. The eagle represents freedom and riding a Harley motorcycle represents freedom also. The eagle is also represented in the National Football League or NFL. The Philadelphia Eagles use the eagle as their team logo. The bald eagle is a symbol of the United States of America and patriotism. The eagle has been used by many different walks of life throughout history.

The eagle tattoo can be done in a variety of different ways and it all depends on what design that you choose. One of the choices that you will have to make is what style do you want your eagle tattoo done in. Celtic eagles and tribal eagles are two different style types. You will also have to decide if you want your eagle tattoo colored or not. There are a few natural tattoos in this article and they look really good. You may prefer to have color in your tattoo. Those who want to represent you country will probably tend to use colors in your tattoo. Those who use the eagle in their natural habitat may tend to just use black ink.

We can take Native American tattoos for example. In such tattoos, eagles are often portrayed with other animals, such as the wolf, deer, or bison. They are dreamcatcher tattoos with the eagle placed in the web or the eagle can be perched on a rock. Many people get the eagle tattoo flying in the air and some are tattooed hunting. This design really gives you a lot of options to think about. It can be used in a variety of different methods.

Before you choose a final design, make sure you research all the tattoo choices they are. You really need to consider tattoo style, symbols, and meanings. You have to consider the size of the tattoo also. Some designs look good big and some look good small. You also have to consider body location of the tattoo as well. It is important to not jump into a tattoo because you will probably get something that you don't like later on down the road. Make sure you do your research and choose a design, style, and meaning that fits you. If you feel that the eagle tattoo is not for you, be sure to check out the other tattoo articles below. Thank you for your visit. 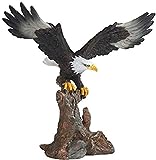