Hat Styles: Choose the One that's Right for You

With an eye on fashion, art, music and movies, Jaynie keeps her finger on the pulse of pop culture. Why? Because it's fun.

Hats are back in style and there remains no shortage of styles to choose from. All one needs to do is to pick up a fashion magazine or watch the style channel and you’ll see countless examples of both men and women sporting a variety of vogue fashion headwear that will make you want to run out and stock up on your own! The fun thing about hats, is that because there are so many styles to choose from, you can select a wide variety of them and be ready for any occasion. Whether you choose at hat for a purely practical purposes (to keep your head warm) or to make a personal statement you are sure to find something that will not only appeal to you, but that you can afford as well.

Some hats, while not common, are just plain fun. Consider the hats worn by women at the Kentucky Derby or by member of the British monarchy, and Katherine Hepburn in My Fair Lady comes to mind.

Hats also have the unique distinction of being able to suggest from where your family originates as many hat styles hail from very specific regions of the world. What other accessory can we say that about?

If you are in the market for a hat but aren’t quite sure what type you want, or what it might be called (e.g. what’s the difference between a tam and a beret), you’ll want to read on.

A Tam, short for Tam O’ Shanter, is a Scottish style hat that is often made of wool and available in multicolored, tartan patterns. Mainly worn by men, the hats are a flat and round and are traditionally capped off with a fluffy pompon. Variations of the Tam are worn by branches of the Scottish military, however in other countries, the Tam is worn more as a stylish cap, including on the golf course, where its fun, funky style stands out from the usual baseball caps worn by other players. There are variations on the Tam O’Shanter by shape and color, but once you know what it is, they are easy to spot.

The beret is a soft, rounded, flat hat that is typically fashioned from wool or felt. Its origin is French but it is traditionally also worn in Spain and Portugal. Berets are worn by various branches of the French military and police but are also part of other foreign military uniforms, including some American units such as the famed Green Berets. Many famous artists, including Pablo Picasso, have been depicted wearing the Basque-style berets and as such, they have become a common site among artist colonies and schools. Well-healed women also favor the beret style hats with complementary scarves as cool weather outerwear. 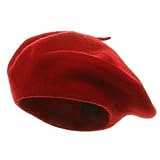 Cowboy hats are a familiar site in the United States, particularly in the south, where plaid shirts and cowboy boots are also common. They are noted by their high, creased crowns and wide brims, often accented with a leather or tasseled band. The cowboy hats originated in the old American west where they served to keep the hot sun off the heads of horseback riders and field hands. The hats are often made from straw or felt and come in a variety of styles including the 10-gallon, or the Stetson. While their origins were purely practical, they have evolved into more of a fashion statement these days, with everyone from country-western singers to fashion models sporting them.

The Fez is an unusual cap, typically fashioned from felt and sporting a tassel. The hats date back to the early 1800’s when they were the preferred headwear for men in the Ottoman Empire. Many men in northern Africa, Greece and Turkey wore the Fez, however the Fez was banned in Turkey in 1925. Many men used to wear turbans wrapped around the Fez, but over time, the turbans were eliminated and only the brimless hats remained. Today, the Fez is also the adopted headwear of many men’s organizations and private clubs and as part of the uniforms of bellhops and porters in some of the world’s tourist hotels.

This men’s felt hat comes in a variation of styles, but is typically noted by pinched-creased crowns and wide-band trim. The hat originally was fashioned for women in the late 1800s, but eventually became more of a stylish men’s accessory and was often associated with men from the Prohibition and Great Depression era. This includes famous gangsters such as Al Capone and actors such as Gene Kelly and Humphrey Bogart. In the movie, Dick Tracy, Warren Beatty wore a white fedora with his yellow trench coat. The fedora and the trench over-coat go together like chips and dip.

This hat is also commonly referred to as a newsboy hat. It is characterized by its flat, round shape and short brim, which in many styles, buttons to the cap itself. It is called the Gatsby because this is the hat worn by Robert Redford in the film the Great Gatsby, and often referred to as a newsboy hat because of its association with boys that sold newspapers on the streets in the late 19th and early 20th centuries. Today, the hat is often worn by top models and is featured in the fashion shoots of many of the top modeling houses. It is typically available in felt or wool and in sophisticated traditional colors such as shades of brown, gray and black.

These rounded, high-crowned hats, typically fashioned from felt or wool, were popularized in the early 1900s by the likes of Charlie Chaplin and Laurel and Hardy. They come in a wide variety of colors including bright greens, royal blue and red and often feature a flower or feather protruding from the fabric band around the base of the hat. The hats actually have their origins in London, where they were commissioned in 1849 by a man seeking to protect his gamekeepers from low hanging branches while they were on horseback. These practical hats actually predate the cowboy hat and were initially more popular than the cowboy hat in the American west and were made primarily for men. They gained popularity and became stylish among the British royalty and men that frequented the Derbies.

The hats worn by women at the Derbies are vastly different and more ornate, with wide brims, flowers, feathers and other accents. They are often worn tilted off to one side and are accompanied by parasols and expensive dresses. Again, think Audrey Hepburn in My Fair Lady.

Hip young urbanites are fond of the knit cap. These caps are available in countless colors and styles. Some are crocheted and some are knit. Many sport team logos and other identifiers. Some are available with long crocheted braids that tie under the chin. Still others have pompons or other accents on top. The crocheted caps are often the chosen headwear of young artistic, individuals with a flare for fun. The caps are versatile and often worn during sporting events such as skiing or skating, but are just as likely worn to the office on a cold day as they easily stretch down to protect the ears from wind and cold. Many come with matching knit or crocheted mittens and scarves.

5 out of 5 stars from 1 rating of Which Hat Style is Right for You?