So, how do you spot a fake Louis Vuitton handbag ? If you are looking for a genuine Louis Vuitton bag then there are certain signs you can look out for, but to be quite honest , even armed with the tips below, it is still very difficult.

Bear in mind too that Louis Vuitton bags are expensive! If you don't want to pay the high prices LV charges, you may be tempted to look around the internet for special offers.

These are some of the signs you can look out for, but, as I said, it is very difficult to know for sure, especially if you are buying online. 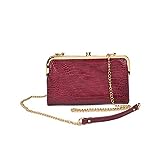 Louis Vuitton womens handbags are the most popular of the designer bags and also the most widely copied. The reason for this is quite simple, they were the first designer bags ever made.

Louis Vuitton was born in Anchay, France on August 4, 1821.. When he was 14 he left his hometown for Paris where he started work as a trunk maker and luggage packer, working in the prominent Parisian households. His reputation grew to such an extent that he was eventually appointed by the Emperor of France, Napoleon III, as official luggage packer for the Empress Eugenie.

This was how he acquired in-depth knowledge about what made a good travelling case and as a result he started to design his own luggage.

At the age of 33 he opened his own workshops with the aim of providing luggage suitable for the "new age" in which travel was becoming increasingly popular and lugagge was more and more in demand.

In 1854 he created his own brand to design innovative, high-quality lugggage. His watchwords were - functionality, innovation, luxury. He opened his first shop in Paris the same year. The business expanded rapidly and acquired an international reputation and a shop was opened in Oxford Street in London in 1885. The Louis Vuitton brand obtained the bronze medal at the 1867 World's Fair and a gold medal at the World's Fair in Paris in 1889. It was in 1897 that the first stores were opened in the U.S.A.