How to Stone Pageant Dresses and Pageant Gowns

Everyone involved with glitz pageants understands the importance of adding bling to pageant dresses and pageant gowns. The rhinestones catch the stage lights and make the dress sparkle. They help catch the judges' eyes, as well as the attention of the crowd. Paying to have a pageant dress stoned, however, is usually very expensive. You can save a lot of money by doing the job yourself! All you need are stones, E6000 glue, a plastic syringe, a toothpick, a steady hand, patience, and a little creativity. To make your work faster and more precise, purchase an electric rhinestone apllicator, sold below. It will definitely make your job much easier!

In most regions of the US, the big clunky stones are out, and lots of smaller stones are in. Purchase your swarovski stones online in bulk to save money. Check out the deals below! Buy 20s and 30s, both crystal and ABs. Also, order a few stones several shades darker than your dress and some about the same shade of your dress for added dimension. You might even want to go with a third shade. You can find E6000 glue at Walmart.

Lay your dress on a table - somewhere out of the way where it won't get stained or bothered in any way. Fill the syringe with glue.

Many pageant dresses and pageant gowns might already have embellishments. If the dress has appliques and/or flowers, this will be a good place for you to start stoning. Place just a small drop of glue in the center of the flower, then place a stone on the glue dot. Slightly press the glued stone to make sure it has good contact with the dress. If any glue is visible around the stone, remove it with the toothpick. You might find it easier to place the stone with tweezers if you don't have an electric applicator.

Be balanced and consistent with stoning embellishments. For example, if you're stoning flowers on the neckline of the dress, do each the same way. Maybe use a colored stone in the center of each one and ABs at the point of each petal.

Once you're done with the appliques, stone other parts of the dress. Little abstract designs are popular now, like an S-shape, curvy lines, and J-shapes. To get some ideas, look at national pageant dress photos online. A word of warning: pageant gowns for older girls won't need as many stones, so don't overdo it.

A glitzy dress for a little girl might have several gross of stones on it. You won't be able to do all this at one sitting. Work on the dress in stages. Hang the dress up every so often and view it from a distance to make sure your stoning is balanced - not too many on one side of the dress and not enough on the other side.

Use a fairly equal number of crystals and ABs in the same area on pageant dresses, and use the colored stones more sparingly, just for emphasis.

When you've finished stoning the dress, hang it up overnight or leave it on the table to dry before placing the dress in its storage container or bag. The night before the pageant, take the dress out and examine it closely to check for missing stones. Replace any that have fallen off. It's a good idea to always have a few extra stones and some glue with you at the pageant, too, to replace stones on pageant dresses and pageant gowns that may have fallen off. 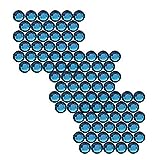 Read more about arts and crafts: