How to Stop Nail Biting Easily

I have been a confirmed nail biter as long as I can remember. To my shame I must also say that I have never just been a bit of a nibbler, but instead I would bite my nails until they bled and in some cases were barely visible above the flesh at the base of the nail.

Why you might ask? Well, my answer would have to be that I really don't know for certain exactly why or when it began, but as I do know I was a young child when it did, I suspect it may have been caused by the fact I grew up in a family where my Father was 56 years old when I was born. Sadly he had many health problems, heart issues, a clot on the brain, Parkinson's Disease, gout etc. These health problems made him a very hard man to live with. He was constantly very irritable and bad tempered and not a warm man towards his family at all. He was incredibly tight with money, frequently turning lights off whilst we were using them to go upstairs or elsewhere, often insisting on us reading in the living room rather than in our bedrooms in order to save electricity. Our poor Mother was over 22 years younger than him and had a very tough time of it, trying to bring up two children, whilst at the same time being a full time Nurse to this very bad tempered and frequently unreasonable older man. To say my Sister and I grew up disliking him was somewhat of an understatement, and it certainly was very stressful living in a home where arguments were a daily event, and someone was nearly always in tears as a result of our Father's behaviour. This is not a hub about "poor old me" though, it is merely meant to offer a possible suggestion as to how this awful habit of mine may have begun. Nail biters whether adults or children, usually bite their nails the most when they are in a stressful situation. 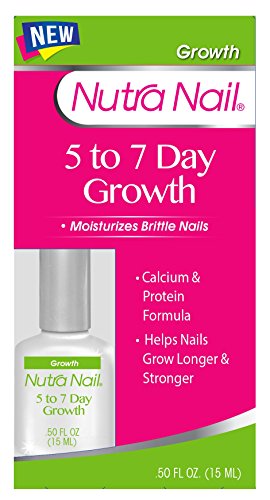 Periodically I did manage to grow my nails, and fortunately for me they used to recover remarkably well considering the abuse I had given them for the majority of the time. I guess I must have managed to grow them successfully about three times, often for a number of months at a time, but it was never easy, and most methods I tried failed. Certainly I had no luck with hypnosis as I tried this twice. Acupuncture was the same story and all those nasty tasting paint on fluids didn't deter my habit either. I went so far as to wear gloves to avoid the temptation, but this was never going to be practical, especially as I was at school at the time. Even when I did succeed in growing them, sooner or later a stressful incident would happen such as getting stuck in an endless traffic jam, and I would end up biting them back down to the base of the nail bed again.

One method which did work quite well for me was to get those permanent liquid and powder nails that set 'rock hard' fitted by a beautician. Every two weeks she would come back to my house and use further applications of the mixture to fill in the base of the nail where my own nail had grown underneath, (and had therefore pulled the false one away from the base of the natural nail bed). Eventually my own nails grew enough underneath for me to dispense with the false ones and simply file my real nail into shape. Because there were now no rough edges to tempt me, I could keep them long without nibbling the rough bits, plus I could paint them in pretty nail varnish which also made them look completely unlike the nails I had bitten previously. Where I fell down here was when my lovely long nails would accidentally get torn or chipped, I would find the rough edge so annoying that I would bite it until I then became 'hooked' again, and worked my way through all my nails so they ended up looking as bad as they ever had done in the past.

When I moved to Tenerife for a couple of years I managed to grow them again based on willpower alone. Possibly I managed this because at the time I was in a new relationship, blissfully happy (but not for long), and life felt so good I found stopping the habit very easy for once. Sadly this was not to last, and I quickly realised I had got involved with a complete control freak who was enough to cause anyone to bite their nails or even worse! After two years of this abusive relationship, including both mental abuse and domestic violence, I was back to badly bitten nails and was an emotional wreck. 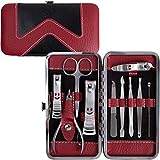 Well, a number of years later I am now back in Guernsey, happily married to a lovely kind man who I love dearly, and although we have pressures to deal with of our own, my life is far more stable than it was then. Because of this I recently decided it was time to have another crack at growing my nails. This time I tried a technique that a friend had recommended to me a long time ago. I invested in some good quality emery boards and a manicure kit and placed them in my handbag. Initially I was going to have to rely mainly on willpower, not least of which because my nails were simply too short for an emery board to be able to make contact with them. I also took a chance on buying some more of that evil tasting nail bite solution and painted it on what was left of my nails. This was not to stop me biting my nails, but more to act as a reminder if I inadvertently let my hands drift towards my mouth without thinking. Next I used the cuticle pusher in the manicure set to push down my cuticles as far as I could. Already this gave the impression my nails were longer, so made me feel more positive about seeing further improvements.

After about two weeks I decided this effort might warrant a hubpage article showing my progress from start to finish. I began to take photos of my nails every couple of weeks or so. Therefore bear in mind that the picture I have used to head this article is actually after 2 weeks growth, so the nails were even worse when I began to grow them.

Once my nails reached the length where I could actually feel an edge to them I could begin to use the emery board to shape them. This got rid of the rough edges and left me with nothing obvious to nibble at. I made sure I always had access to an emery board and did not use a metal nail file at all because they tend to tear the nails rather than filing them properly.

I invested in a four way nail buffer. This is a great tool because it has four surfaces, one to file nails, one to smooth out surface ridges, one to stimulate natural oils on the surface of the nail and a final surface that buffs the nail up to a superb shine. I also carried this everywhere, so on the occasions I was sitting around with nothing to do, such as waiting to pick my Husband up from his work, I could treat my nails to a session with the four way buffer. Buffing the nail also stimulates blood supply to the nail, therefore increasing the growth rate. Apparently nail biters nails grow faster than non-biters because the biting does the same as the buffer, stimulates blood flow. Of course nail biting would defeat any advantage gained from the faster nail growth, but a buffer enhances the nail as well as speeding up the growth of the new nail.

I also ensured I carried either an orange stick or a cocktail stick everywhere. This was because I spent so much time gardening that I was always getting dirt stuck firmly under my new nails. The easiest way to get rid of this was with a cocktail stick, although I was also advised that scraping my nails over a damp bar of soap before gardening would mean the dirt could not get stuck under my nails because the soap was already there. After gardening it was simply a case of using a nail brush to scrub away the soap with hot water and the nails would be perfectly clean again.

And so, as time went on my nails grew longer, looked healthy and I felt far more comfortable showing my hands in public. Previously I had tended to try to hide my nails because I was embarrassed of them and hated it when people would exclaim in horror at how short they were and immediately want a closer look, or worse, would want to show someone else who they were with. The results of my efforts you will see in the final photo on this hub, and I hope you agree that they are now a huge improvement on the ugly, chewed mess they used to be. My tips for success are essentially to:

1) Wait for a calm time in your life to grow your nails.

2) Carry a good quality emery board and manicure set with you at all times.

3) Use a nail bite nasty tasting solution as a reminder if you accidentally allow your hands to drift towards your mouth.

4) Buy a four way nail buffer and use it in situations when you might previously have bitten your nails.

5) Carry a cocktail or orange stick to clean under your new nails if you find dirt or grime stuck underneath them.

Good luck, it is amazing what you can achieve when you set your mind to something!