The History and Invention of The Bra a fascinating look at the origins of lingerie.

Two nice little Bra books. Have a giggle at the way women suffered for fashion. 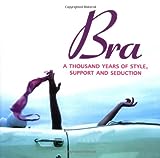 Bra's Have Come A Long Way!

No more flopping and dropping.

Evidently the first bra or corset was around in 2000 BC, it was open at the front of the waist, leaving the bosom uncovered. Not particularly successful then! But as the years progressed in different parts of the world, we started to come up with ingenious ideas on how to stop flopping and dropping.

In 2500 BC warrior Minoan women on the Greek island of Crete, began wearing something that resembled a bra, this succeeded in shoving their bare bosoms up in the air, exposing them to the elements. Brrr, chilly. Still hadn't quite got the point, had they.

450BC, The Greeks tied a bodice above their breast, as well leaving it all exposed as usual. Dear God when will they learn? The funny thing is that it was against the law to wear corsets, yeah, I would like to be in parliament when they passed that law, anyway, so they used something called the Apodesme, which was a small band of material wrapped around the breast, largely for functional reasons, so they didn't flop about. Hurrah, they are starting to get it.

The roman women adopted the same attire, but changed the name to mamillare, ah, I can see where we are going! And young women wore the fascia to prevent the growth of their breast. Ouch! Also the mamillare was only used by big wobbly women, to keep their bits intact.

Anyway, on we go to the 4th century AD, where the Chemise first made itself known. It was made of linen and looked like a tunic. The chemise was gathered into a round or square neckline. it was embroidered and sometimes finished with a frill. Some also had long sleeves that ended with a ruff around the wrists.

France saw the arrival of the Bandeau, After Caesars conquest of Gaul. And in the 12th century, they started to wear the Basquine which was a sort of corset in rigid fabric surrounding the waist. About a century later, a gourgandinne ( Hus-sy) or bodice is worn on top of a corset. A Hus-sy, I hear you say, now you know where that came from. Good eh?

In the 13th century, they started to get the point, by making short bodices that flattened the boobs, er bosoms, sorry! and in the 14th century, they got even worse by making the whole thing tight and flat, but only longer this time. Ye Gods.

In the 15th century women subjected themselves to the torture of the whalebone corset, and also the steel rod corsets. These were made to be as tight as possible. This went on for the next three hundred and fifty years. No wonder women always had a touch of the vapours and passed out.

But then, hallelujah, along came the right idea, in the shape of the bodice changing from flat to perky! Oh hold on, not that perky. the bottom of the corset was flat against the breast, and the top peaked over the material. Seems like most celebs these days have the same idea.

I'll just have to mention the 16th century, it was hilarious, the women decided that they wanted to start the stuff the hankie down the cleavage trend, and they used anything including silk pouches, the trouble was, there was nothing to hold it up, and it ended up in the most bizarre places on their body! This led to much amusement and they soon gave it up as a bad idea!

All these bizarre and strange ideas carried on well into the 18th century, and the corsets made from bone became the favourite item. In 1820 . a Corset mecanique was invented to help women into their corsets. This consisted of a contraption made up of pulley's, so that they didn't need any help from the servants. The mind boggles.

Eventually after all this palaver in 1850 the first patent was registered for the first known bra like devices. Probably because all the husbands were getting fed up of falling over the pulley's in the bedroom.

After all of the years when women were nearly killing themselves pulling on the corsets and not being able to breath, In 1867 the Thompson patent glove fitting corset was invented. this consisted of hooks and a spring latch, supposedly to stop it falling off accidentally. If the spring broke for some reason I would imagine it would end up like Barbara Windsor in the carry on film, Carry on Camping. (if anybody hasn't seen it, she is doing her exercises and the bra snaps and springs off, shooting through the air, and hitting the Coach in the eye!)After that they came thick and fast. The Union Under flannel was made from wool, making it quite soft, then came the bra like garment called the Bien etre, that resembled a Victorian bikini.

The first proper bra as we know it today, became fashionable in 1907. People suddenly got the right idea and started to put hankies and pieces of cloth together, first with pockets on the front, and then tied up at the back.The term brassiere came from the french for upper arm. The word brasserie was first written up in the dictionary in 1912.

Funnily enough, it was the first world war that stopped the idea for the corset and made bra's as we know them more popular. Evidently they needed the metal for the war effort. By stopping it being used, they saved up to 28,000 tons of metal!

And since then, bra's have come in all shapes and sizes, bra's to flatten your breast, bra's to accentuate, even conical bra's like the singer Madonna!

From handkerchiefs, to metal pulley's. We women have gone through hell, just to get ourselves comfortable, and even more importantly, fashionable.

So the next time you pull on your bra, snap it shut or just use the hooks and eyes, be grateful you don't have to swing yourself from the ceiling like Superman, holding onto a giant pulley.

Why Not Try The All In One Set?

Hi, If You Like Strange But True Stories, You Will Love This!