Jade or jadeite (Yu or Fei Cui, in Chinese) was defined as beautiful stones by Xu Zhen (about 58-147) in Shuo Wen Jie Zi (the first Chinese dictionary). It was originally the name of a bird in China. Fei refers to a bird with red feathers, Cui refers to a bird with green feathers. Gradually the two characters merged to name a type of bird with blue-green and spotted brown colors. The reason why Fei Cui was used to name jade, and especially refers to jadeite that contains sodium silicate, is because this type of jade has uneven colors, sometimes accompanied by light-colored base with red and green in it, just like a beautiful bird described above. In fact, jade has been valued throughout Asia as the most precious of all stones for thousands of years, one that symbolizes good luck, good health, and guards against evil spirits. As jewelry, the Chinese value jade above all other gemstones. They believe "jade is the most sumptuous jewel against a woman’s flesh". Jade is now appreciated worldwide for its beauty, rarity, and durability. Giving someone a piece of jade sculpture or jewelry is one of the great gift ideas for any occasion, and it never goes out of style.

Green jade is the most common type of jade used in jewelry. Usually, the color of the green jade is a murky dark green, but it can be extremely light or even slightly translucent at times. Green can be mixed with blue, some brown, or even yellow and black. The most expensive of all more than 100 different colors of jades is green and red. Green is more popular in China, where they are believed to bring harmony and calmness to the wearer. Imperial jade is considered more valuable than regular green jade because of the clarity of the emerald color. Today, in the USA and Europe, emerald, lime, and spinach green is considered more valuable as well, and holds higher regards when referencing than any other jade.

Thought to be the purest jade stone, white jade is a rare version of jade, although not as popular as green due to its nature being a nephrite. The color is not completely pure, usually has a few visible cracks or dark areas, and there are clear areas too. However, they are not often used for jewelry, but mostly for decoration. White jade is believed to be beneficial for fertility, and healing, but doesn’t have a direct purpose like most jade stones. Read more on White Jade 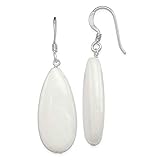 Yellow jade is one of the rarest types of jade, and can be as light as a lemon, or a dark golden color. Yellow is made with iron oxide, and the element tantalum. They are found in Japan, Myanmar, Guatemala, California, and in some parts of Alaska. In China, this stone symbolizes wealth, good fortune, friendship, and loyalty. Read more about Yellow Jade

Blue jade is a common yet beautiful stone. There is a “glow” in blue jade, meaning it shines a little and according to many cultures, resembles the sky and heavens. Blue jade can have a wide variation of different colors, ranging from metallic blue, ocean blue, sky blue, blue-green, turquoise, and even a mix of white. Blue jade is popular all around the globe and is used for almost anything, including both scenery and fashion. Read more about blue jade.

Black jade is the only jade that carries both nephrite and jadeite. Black jade is a jadeite jade that has a strange dirty black color that can range from jet black to very dark green. It is usually glossy and shiny, with multiple colors inside. The color black is actually always a very dark green, but because of the iron oxide, it may appear to be black. Read more about black jade. 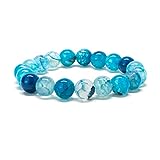 Dark jade is the kind of nephrite that is black as ink. Dark jade is a precious and scarce natural stone, exists in only nephrite. The color is thick and heavy, dark as ink; texture is very fine, bright, clean, lovely, and prestigious. Its has the hardness that is perfect to be ink stone and base material for carving. Technically speaking, a piece of truly authentic dark jade requires billions of years to form therefore dark jade is highly valued. Read more about dark jade.

Based on my research, checking all information in English and Chinese, I have concluded there was no such thing as red jade. The so-called red jade we normally see being sold online is either carnelian or red chalcedony. There is fire jade, though, but it is not really a jade. Bloodstone is the same thing as the chicken blood stone in China. Although people may call it chicken blood jade, it does not fall under the same roof as the rest of the jade.