The ladybug tattoo is a great choice for woman who want to get a cute tattoo design. The ladybug has been a longtime symbol of good fortune and good luck. The ladybug is one of dozens that are considered to be a good luck tattoo symbol. The ladybug is a very symbolic symbol to a variety of different cultures all across the world. This makes it a very popular tattoo choice among women.

The ladybug is also associated with Christianity and Virgin Mary. There was a bad plague of crop eating insects back during the middle ages in Europe and nearly every crop was destroyed. The citizens began to pray to the Virgin Mary. Soon after, ladybugs began to show up and they killed all the crop-eating insects that wreaked havoc on their farms. This event actually earned them the name "The Beetles of Our Lady". They later became known as "Ladybugs".Christian tattoos can portray ladybugs with other Christian symbols and elements.

The history of the ladybug goes beyond all the myths and legends. According to the Chinese, the ladybug is considered to be auspicious and good luck. Many different cultures around the globe believe the ladybug represents good luck. As you already read, the ladybug is associated with the Virgin Mary in Christianity. In Asian cultures, the ladybug is a sign that true love will find you. The number of spots represents the months that one will have to wait. Due to these specific associations, ladybugs can be portrayed within Asian tattoos. 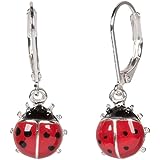