Before I tell you all about my two pairs of Men's Tony Lama Cowboy Boots, I must first insist that despite me forever living in rural North East Texas, I'm not the least bit a cowboy. Yes, I've rode horses before, I even broke a horse once on a dare - that my friends, is another story for another day. Yes, there's a bit of a farm here where I'm living, and yes, there are several cows in our pasture.

Yes, sometimes I wear a bit of a cowboy style hat, and yes, lots of folks around here are literally cowboys, and yes, I've been to a rodeo or two in my days, and enjoyed the show. Facts are, were I to have run with the right, or even wrong sorts of crowds when I was younger, then it wouldn't have been much of a stretch for me to have become involved in rodeos, and even bull riding. I know me, and I'm sometimes a thrill seeking danger lover, and I've been told more than once that my specific physical build was absolutely perfect for riding bulls. I'm not a cowboy, however, I'm just a country boy.

So anyway, I'm not a cowboy. Glad you got that down.

Here in my region of the world, non cowboy types often wear what folks from elsewhere might consider a cowboy uniform, well, fine by me if you wish to call it that. The hat, jeans, and boots thing is really just a rural Southern uniform, and a farmer or blue collar guy is just as likely to be wearing the jeans, boots and hat style of dress as an actual cowboy. Moving right along....

So anyway, I went out last Saturday night, and despite me being so dashingly good looking and all, I actually never go out much of anywhere. I'm forever piss broke, and staring at a computer monitor. A somewhat well to do friend came to town from far far away, and he paid for everything - as he is well aware of my piss brokeness, and that I never go out much of anywhere.

I do like going to bars. I like getting tossed and looking at women in bars. I also find that I'm pretty good at talking a few or one of them into falling into my arms here and there. I think I'm able to do this simply because the Gods of Texas dive bars realize that I never go out, and they wish to entice me into making a habit of it. My personal suggestion to the Gods of Texas Dive Bars is that they grant me lots of money, and I'll then see what I can do.

My well to do friend showed me his shiny and very fancy looking new pair of cowboy boots that he was wearing when he showed up to take me out for my one night in the Texas Dive Bars for the year...and I thought nothing of it. I've no idea if he was wearing Tony Lama Boots, or some lesser or more expensive brand, but they looked very nice. I tend to think that I look nice enough most of the time regardless, and so I wore my newest pair of Sketchers shoes.

My friend, his sisters, and a cousin and I all went out to Kicker's Kaufman, it's not exactly a cowboy bar, per se, but rather, it's Kaufman, Texas' only true bar. Yeah, we closed that joint down, and wanted more - so we drove the ten miles to Terrell, Texas Silver Saloon, now The Silver Saloon used to be known as Lee's Silver Fox, it's a damned big bar, and is more or less, a true cowboy bar.

Well, upon entry to The Silver Saloon, and finding a slightly less crowded spot than others in which to stand and enjoy an adult beverage, I spied a very pleasing to the eye flower of a woman wearing an odd but also attractive pair of boots.

I'll cut to the chase - the girl was a veritable Brick House, the kind of figure that The Commodores had sung about. Lovely Southern Belle face, and, well, the cowgirl boots. I walked up to her and touched her arm or something, and just asked,

"Ma'am, what kind of boots are those?"

Well, I don't recall the name, but she told me that those brand new looking boots were Ostrich boots, and that they had belonged to her grandmother. I'm hoping to give you the idea here, all very true, that a fine pair of cowboy or cowgirl boots will last you an entire lifetime, and possibly longer.

Later I'd walked over across the large Honky Tonk, as they used to be called, to the men's room. After walking out and back towards where I'd come from, I saw that lovely young woman, and she did give me a rather satisfying lusty look. What that look told me was that she found me attractive...probably because I wasn't much shy about talking to her, even about something seemingly as mundane as a pair of boots. Certainly, that woman intimidated some other guys, and certainly, she was very proud of her grandmother's ostrich skin cowgirl boots. 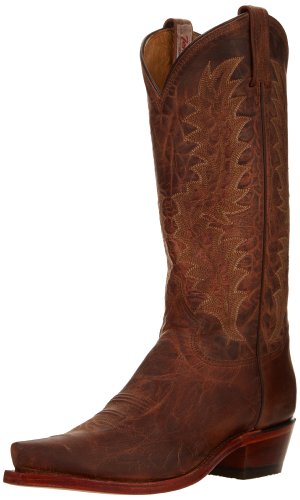 Women At The Bar, By Wayne Brown

After my one night per year out at a Texas Honky Tonk Dive Country and Western Bar, I was quite hung over, and feeling a bit dumpy. I had to get out of my little trailer, after coming home in the morning, and trying to nurse my hang over with another beer...hair of the dog, and all that.

Well, I went next door to the parent's house, and told them about the this and the that, and the who that I'd seen, and so forth and so on. I casually mentioned that I'd not been properly dressed for The Silver Saloon, and that I'd needed some proper cowboy boots. Well, the Dad is a bit of a larger framed man than I am, but we do wear the same sized footwear - except that the Dad reported that his feet had seemed to have gotten wider now that he's into his early 60's, and that he had some very nice and very proper cowboy boots that he could and would and then did give to me.

So now I own two pair of proper Men's Tony Lama Cowboy Boots, and they look exactly the style and shape of the boot in the very fine picture most prominent on this very web page.

One pair is elephant skin, and of course, those are rather the better, finer, and more expensive ones. Please, Please, and again, PLEASE do not think that I condone the killing of an elephant for the making of a pair of boots. Elephants are becoming rather a bit too rare in this world for my liking, but if and when one does die - then by all means, I do, in fact, suggest that his hide be used for something as fine as a pair of boots; but only at death, and death from natural causes.

My other pair is cowhide, and gosh - I'm not going to compare a cow to an elephant, and neither should you. I consider beef a fine food, and I do, and will, continue to consume a lot of it. I'm also a huge fan of all things leather, and I will debate you for a century should you presume some sort of moral superiority in not using or wearing leather.

The boots fit me perfectly, and though they are obviously not new, a bit of polish will make them look ever the perfect footwear for those out and about in rural Texas, or in fact; the entire South.

My Dad told me that both pair of boots that he'd given me were purchased before I was even born. People, I'm nearly 38 years old, and I've two pair of well worn Tony Lama Cowboy Boots that are older than I am, and in near to perfect condition, and I've seen those boots on my Father's feet more times than I could ever remember. I can't think of anything that could be a more thorough advertisement of quality than what I just relayed to you in this paragraph.