The Ultimate Guide to Men's Underwear

Underwear: The Foundation of a Man's Wardrobe

Every great outfit begins with a pair of underwear. Unless, of course, you are the type that prefers to go commando, in which case I would you ask you to refrain from wasting your time reading about mens underwear and contemplate your lack thereof. Before any man puts on that comfortable pair of jeans or that sharp new suit, he puts on his underwear. Lest you think underwear is not important, think again. The key to a comfortable and relaxed day is a pair of comfortable, soft, and relaxing underwear. Those little under-trunks are quite powerful things. Whether or not you are sweaty and hot or cool and breezy really all comes down to whether or not the right pair of underwear was chosen at the time of getting dressed.

This guide to men's underwear will hopefully serve as a resource that will allow you to make better underwear choices for yourself, or give help you make good choices for an important underwear wearing man in your life.  It is my hope that this men's underwear guide will provide you with the tools and tips to choose the right pair of underwear for the right occasion, as well as understand the differences between the various types of underwear and perhaps even persuade you that you should own at least one pair of each type.  By the time you are finished, you will no doubt have reached underwear enlightenment, and will be ready to go out and wow the world with your vast underwear knowledge so that they too can experience life with a solid and comfortable outfit foundation.

A prevalent selection amongst the pre- through slightly post-adolescent crowd, the boxer short is a loose-fitting underwear that puts one in mind of an especially small pair of shorts. The boxer short is also a popular selection amongst the urban hip-hop community, in addition to finding a great deal of ownership in the more rural and agriculturally oriented demographic.

Boxer shorts as underwear afford the contents of the underwear a great deal of movement in freedom, and so perhaps this very freedom is the reason that they are most popular as an undergarment in the United States. The lightness and easy movement of the boxer shorts also allows the wearer to experience more open airflow, making boxer shorts an ideal undergarment during the warmer months of the summer. Conversely, the wearer may find that they allow a bit too much freedom an airflow during the winter months. In addition, boxer briefs are best paired with a more rigid component of outerwear such as jeans, khakis, khakis shorts, plaid shorts, and the like, as light and flowing athletic shorts have been known to not hide certain incidents very effectively.

As a standalone item, boxer shorts are excellent candidates for sleepwear, lounge-wear, and even swimwear. Available in a wide range of colors, prints, brands, and prices, boxer shorts are an extremely versatile edition and an integral component to a comprehensive collection of men's underwear. 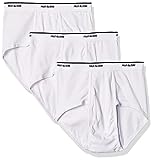 At the direct opposite end of the spectrum from the freedom of the boxer short, there is the brief. The briefs perhaps the quintessential underwear, as every male has undoubtedly worn a pair at some point in their lives. Briefs seem to find their niche, stereotypically, amongst the middle-aged to older crowd that were raised wearing them, and have seen no need to mess with, what they feel, is a good thing. In the United States, briefs have become the subject of jokes, and attain an almost reviled status, for reason's unknown to me. The brief has attained much more success and adoption abroad, where many even choose to wear brief style swimming suits. Ultimately, the wearing of the brief may be a confidence issue. While people in the US seem to constantly find something about their bodies they don't like, people in Europe and Australia celebrate their form and figure with the brief.

The brief is rather tight, and as a result keeps everything together very well. While I would not necessarily suggest briefs for a blazing hot and humid summer day, and the relaxed setting, I would suggest that briefs be worn when the man is in need of some extra support and confidence, or perhaps when insurance is needed against the occurrence of certain unplanned and involuntary events. Consider briefs to be the best friend that will have your back (or in this case, front) no matter what. Consider them the friend that you can always count on to do the job, and do it well.

Briefs, like boxers, can be found in an almost endless array of colors, textiles, prints, thicknesses, and cuts.  For those preferring a classic look, there is the regular brief.  Those that like straight lines will find the short cut-off brief more aesthetically pleasing.  Briefs make excellent sleepwear, yet it is generally best to leave them off of your list of lounge wear, unless you pair them with a well-covering bath robe.

In a world wear the wearers of the boxers and briefs stand diametrically opposed to one another, the boxerbrief calmly breaks through to bring a sense of unity and fusion between the two undergarment styles. Boxerbriefs have gained immense popularity in recent years all over the world, and have become the preferred underwear of many. Boxerbriefs transcend age froups as well. They are popular amongst children whose parents would spare them the perceived embarrassment of wearing tightie whities. Teens and young adults like them for the comfortability and coverage. Adults like them for their support and comfort, as well as their newness and youthfulness.

The boxerbrief embodies the more form fitting qualities of the brief and the comforting and stylish qualities of the boxer. Boxerbriefs are great if you like to be relaxed, as they afford for a great deal of movement, but they are also excellent if you prefer to have things kept under control.  Athletes like boxerbriefs because they allow a great deal of movement, while preventing unnecessary and out-of-control floppage of the underwear's contents.  Boxerbriefs make for excellent loungewear and sleepwear, and are a totally acceptable piece of apparel for moseying around the house on a lazy Saturday morning. 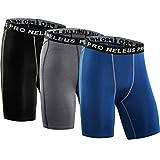 An extremely popular selection amongst athletes, the compression short, as it suggests, compresses.  The compression short is the choice undergarment of athletes of all sports and disciplines from biking and running, to soccer and basketball, to the pole vault and surfing.  Compression shorts hug the skin extremely tightly, as they are made primarily from a spandex-like material, so as to keep everything in its rightful place.  Compression shorts also wick away moisture to keep any potentially swampy areas free from any discomfort caused by sweating.

While compression shorts primarily serve athletes, the jock strap is basically exclusive to athletic circles.  Gentleman will rarely be in need of a jock strap for reasons other than sports, although some have been known to make exception because of personal preferences.  The primary function of a jock strap is to hold everything in place during extremely strenuous physical activity and contact sports.  A protective piece of plastic, called a cup, is generally added to the jock strap for added protection, that unfortunate injuries may be prevented.  The jock strap is primarily used in sports such as football, baseball, lacrosse, and hockey, where it is particularly easy to get hit by an errant elbow, ball, puck, etc. in the nether region.

It does not seem completely right to call a jock strap an article of underwear, but it must be considered one nevertheless considering it's function and placement under the outer garments.  Athletes wishing for extra coverage will usually wear a pair of compression shorts over top of their jock strap so as to prevent any embarrassment should their pants or shorts end up removed for some reason through the course of play.

While there is a seemingly endless variety to be had amongst other underwear, such variety is not to be had with a jock strap.  Jock strap shoppers are essentially confined to obtaining the garment in either white or black, however a few designer companies have taken to promoting the jock strap as a fashion item and have begun to produce them in some colors - although the price is considerably higher and the items are perhaps less functional than those intended for athletic use only.

Having covered the major categories of men's underwear, there still remains quite a few styles that are at least worth a mention. These styles include those really only intended for more intimate settings, and as such, I will not expend many words for their description. These other unique and wild underwear come in styles and varieties known, in extremely general terms, as mesh, the sock, silks, and the barely there thong. In keeping with the generally accepted rules for G rated content, I will conclude talking about these and allow you to research them more thoroughly on your own should you feel so inclined.

The final noteworthy style of men's underwear is the all comprehensive thermal. More commonly referred to as "long johns", thermal underwear is an extremely important undergarment to have if you live somewhere receives snow, ice, and frigid winter temperatures. While it can create a bit of discomfort, thermal underwear has been known to keep men warm all day long as they wear it layered beneath their jeans or even underneath their dress pants in more professional settings. Thermal underwear doubles as an equally impressive item of sleepwear for those wishing to have a comfy, cozy, and warm night's sleep.

What type of underwear do you wear?

If you have any questions about the styles or specific products that you see here on this page, please feel free to leave them in the comment section below, and I will respond as soon as I can.  Also, if you have any general comments about men's underwear, or perhaps any suggestions on styles and categories to add that you think I may have missed also leave them in the comments so that I can address them and include them as needed.  Stay comfortable, my friends!