I've already covered that I'm a tomboy and I don't know much about beauty products. I don't understand words like clarifying, humectant and pH balances in relation to beauty products. Retinol sounds like something you use to poke people's eyes out with. I barely know what toner is. And Phytocosmetics? What?

My train has derailed already and I've barely left the station.

To set up this story, I must tell you that I have an unofficial phobia called trypophobia. It involves an intense fear of clusters of holes. The other day, I happened to be close to a mirror and saw PORES. Oh no, that was bad. I wigged out and my roommate told me to get this stuff called Queen Helen's Mint Julep Mask because it would reduce my pores. Of course I forgot to buy some at Walmart, because that's how I roll, so I ordered some online and it came in today.

Now, I have previously used facial masks that peeled off kind of like Elmer's Glue when I put it all over my hands and let it dry as a kid. I was ok with that. I was not prepared for this.

Facial masks may have started in Egypt. Somewhere, some enterprising young woman found out that putting mud from the Dead Sea on her face gave her better skin. Cleopatra may have used them, although hers were probably applied with gilded gold spatulas.

People have done some rather funny stuff in the way of masks. These things include ant eggs, pureed vegetables mixed with the excrement of animals, herbs, flowers, spices, salts and virtually everything that one could put on their face.

Today spas offer full-treatment facial and body masks. If you've got the dough, you can get a caviar facial, a dark chocolate body wrap or even something really special, like a $7000 diamond and ruby peel specially designed by actress Mila Kunis. SCORE!

I Could Probably Stop Traffic

As I said, I got the stuff this morning. Since I had to shower anyway, I decided to go ahead and try it. So I gathered up all my stuff and headed into the bathroom.

Normally, I'd just open the stuff and put it on, but I decided to read the directions first. Good thing I did. I needed to wash my face first. I know how to do that. Check. But, why do I have to wash my neck, too? I don't have big pores on my neck. Whatever. Following directions was never my strong suit. But I did wash my neck. The tube didn't tell me if I was supposed to dry my face or not, so I did anyway, just to be contrary.

"Julie? JULIE!!!! Is this stuff supposed to look like this?" She gave an encouraging answer, though she likely thinks I'm teched. (Southernism for REALLY special. Like short bus special, but without the helmet. Jeffie likes apples.) So I head back to the bathroom and try to read the instructions with a handful of baby poop because, yeah, I know. I should have read them first.

The bottle tells me to "Apply Mint Julep mask generously." Ok. What does that mean? Should I have a thin layer or should I go get a spatula? I decided somewhere in the middle was ok with me. So I spread the goop on, careful not to get it in my eyes because the bottle says, if I do, I will have to rinse my eye thoroughly with cool tap water. Since I'm not sure that I can get my eyeball out to rinse it off in the sink without calling an ambulance, avoidance is the best policy here.

So I get the stuff on. It smells good. Minty, but more like Colgate than Mint Julep. It's ok, though, at least it doesn't smell like swamp ass. Then it starts to tingle. This is ok, too. Julie said it was going to tingle. Then the tingle turns into cause for concern. I do have semi-sensitive skin, probably because I never trained it to wear chemicals - now this stuff is starting to burn a little. I'm standing in front of the bathroom mirror hoping that this stuff is doing a quiet little Chernobyl dance on my pores, wondering if I need to get it off of my face LIKE NOW when it quits the burning thing. That was close.

Then I decided to have a little fun.

My roommates' kids are not exactly your normal, garden variety children. They like really weird things, among them, zombies. I just couldn't pass the avocado-toothpaste green face opportunity to scare the crap out of the kids up. So, after I got one of the roommates to take the beautiful picture of my greenie face, I went to the front door, opened it just enough to yell at the kids so that they couldn't see me. I asked them to come to the door.

When they got there, I jumped out and roared as loud as I could then started chasing the kids around the front yard, telling them I was going to eat their brains. It was AWESOME!

After they realized that I wasn't really a zombie, they got curious. They had to sniff the green stuff and then they tried to lick it. That's when I decided it was time to head back in the house. Incidentally, now they all want greenie faces.

So I get my stuff ready for the shower, since the stuff on my face is all dried up now and it's starting to itch like crazy, I read the final bit of instructions on the tube. "Remove with warm water and a washcloth." I was in luck, I managed to have both.

So I get in the shower, get the stuff off and got on with my day.

Now, five hours later, my face is all soft and stuff... but I still have pore problems. I don't know if I have to do this again tomorrow or for eleventy seven days in a row afterwards. The whole "chasing the kids around the yard with a green face and hoping someone doesn't see it and wreck their car" thing is probably going to get old after two or three dozen turns.

I'll try it again, though. At least I know what to expect!

More Organic Beauty Options (Or Make Your Own!) 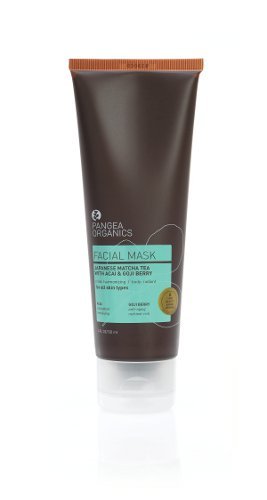 Here is a breakdown of what's in this stuff. Notice that none of the ingredients are spelled M-I-N-T.

All in all, not too bad considering I can, with some effort, pronounce those things. Still better than NutraSweet.