Before technology made sonar radar and GPS available, sailors would always use the stars to navigate the open waters of the oceans and seas. One of the most well known stars that was used for navigational purposes was the North star. The Southern cross star was also used to map directions, but it is not widely known like the North star. Sailors would use these stars and others to make sure they were traveling in the correct directions.

Back in the days of early sailing, many people were very superstitious. There has always been stories and legends of man eating sea monsters and other mythical creatures. Not only that, the oceans were a dangerous place to travel at that point in time. Without radar, the weather couldn't be tracked very well. You could only imagine what a hurricane could do to ships back then and sailors had very little warning of such events. Because of all these reasons, the nautical star began to commonly make its appearance. It became a symbol of tribute to the stars. To sailors, the stars were very important to their travels. The nautical star represented that importance. 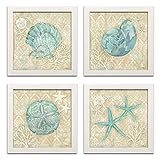