She sits on the edge of a bed. The camera follows her hands as they slowly roll down her black nylon stockings. Starting at the top of her thighs, she peels them off revealing the pale flesh beneath. Languidly, she tosses them on to the floor or over the back of a chair. In the movies, such a scene has traditionally been a symbol of seduction.

In the time frame of lingerie or foundation garments, nylon stockings are a newbie. While stockings in some form or another have covered women’s legs for time in memoriam, nylon stockings only date to the 20th century. Julian Hill, working under Wallace Hume Carothers, began research in long chain carbon polymers. By 1935, he had created polymer 6.6 from a process involving coal tar, water and alcohol. As a result of his work, nylon was the first synthetic fabric ever created.

Carothers, to which the find was later credited, was less than enthusiastic. He did, however, dutifully reveal the existence of 6.6 to their company. In 1938, the Du Pont Company patented the synthetic product in the United States. It turned out to be just what they needed to battle silk and wool in the hosiery market. They did not realize they were creating a multipurpose material and a product that would excite women world wide. Nor did they know that 6.6 as nylon stockings, it would become a common household world forever as nylons.

Fittingly enough, they introduced the product, nylon, to the world at the New York World’s Fair in 1939. It was an instant success. In fact, it is said nylon owes its name to this event. The first letters, n y, stand for New York.

Nylon was just what the public and manufacturers were looking for at the time. It was a strong, lightweight material. It was resilient and non-absorbent. It was impervious to the attack of any insect. All these qualities helped ensure a longer shelf life. Nylon tended to shed dirt as well. Moreover, it retained its shape better than other materials and was washable. Women liked it because it was wrinkle and bunch free. Manufacturers liked it because it was inexpensive. Compared to the cost of silk or wool stockings, nylon was cheap.

Sales continued high in the United States until after Pearl Harbour. Yet, as soon as America entered World War II, conditions changed. All nylon was directed to war use. Nylon stockings became exceedingly expensive. In fact, in the United States and elsewhere, there were only 2 major sources of supply for desperate women: the Black Market and American soldiers.

During the war, American soldiers travelled light. This did not, however, prevent them from coming prepared for seduction. A pair of nylon stockings went a long way toward influencing foreign policy. In many places, nylon stockings were as good as gold. They were a form of currency. 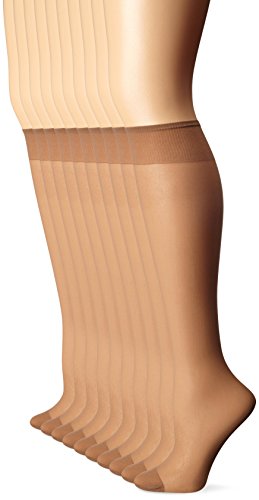 At home, women could buy on the Black Market - if they had the money. Most simply went bare-legged, drawing a black seam up the back of their legs. In doing so, they were imitating the lines of nylons. These full-fashioned under garments were flat pieces sewn up the back. It was not until the early 1960s that the tube process eliminated the need for a seam.

When the war finally ended, nylons were back with a vengeance. Retailers began to stock their shelves with this “essential” product. How essential, you may ask? On the first day Macy’s advertised nylon stockings, they sold out. In fact, the total of 50,000 pairs were gone within 6 hours. This love-affair was to continue into the 1950s. This decade introduced the public to stretchable nylon. Crimping under heat produced this effect. Nylon stockings were now more flexible.

Nylons continued to remain popular with women until the invention of the miniskirt. With the arrival of Quant’s little outfits, the garter-stocking combination was in trouble. While many questioned the modesty of the new fashions, women found it immodest to show off their undergarments and impractical to wear nylons. The solution was pantyhose.

Nylon stockings fell into disfavor after the invention of pantyhose. They remained part of erotica but lost their original practicality. There has been a recent upsurge in their usage. In the past, only women of questionable morals revealed the gap between a garter and stocking. Today, some fashions dictate this to be a norm.

Other motives are found for a return to nylon stockings. While some wear nylons for “health” reasons, others have more satisfactory motivations. Nylons are undeniably sexy. They make you feel attractive and even flirty. Some women enjoy the feel of nylons on the legs. The very sensuality of it adds confidence to a person’s allure. Nylons also abet the process of seduction. The ability to quickly, smoothly and sexily remove these under garments adds an extra element to the overall power and enjoyment of bedroom play.