Polynesia is a group of a thousand islands that are located in the Pacific Ocean. Body art and tribal tattooing were a way of life in the past and it is still practiced today in many areas of this location. Each island and location uses their own distinct designs and patterns when it comes to tattoos. Pacific tattoos and Polynesian tattoos have become very popular today and both have inspired many tattoo designs seen today.

When we look at the history of Polynesian body art and tattoos, we see that their tattoos and body art had deep symbolic meaning. They were given certain tattoos to mark their journey through life. To the Polynesians, body art and tattooing are sacred rituals. Once a young man entered his 12th year of life, he would be able to begin getting tattoos. Specific marks defined his travel from being a young boy to becoming a man. With each achievement that is made, the person would received more tattooing. These tattoos would mark your rank in the tribe. The more tattoos you would have, the more respect you would have in the tribe. These same tattooing rituals have inspired Pacific tattoo designs and Polynesian tattoo designs seen today.

Women were also subject to tattoos in these Polynesian tribes. The only difference between men and women was that the women did not get tattoos all over their body. They received tattoos on their arms, lips, hands, chin, and arms. Most of the tattoos that were done at this age in time were simple designs, but these tattoos had deep cultural significance to their tribes. Today, in retrospect of modern day tattoos, not many women get Pacific tattoos, Polynesian tattoos, or tribal tattoos in general. However, in these same locations, women still wear the Pacific tattoo proudly.

When it comes to Polynesian tattoo styles or Pacific tattoo styles, there are mainly just two. They are called Etva and Enata. Etva is a style that has a strong spiritual meaning and religious purpose assigned to it. Magical symbols are used and associated with this style. It is said that these symbols offer protection from the Gods. The Enata style has more natural design attached ot it. These tattoo designs mark a person's social identity, origin of birth (specific island), work or occupation, and their specific path in history. Most Polynesian tattoos are sacred and honorary to all tribe members. At this age and time, the Pacific style doesn't hold such importance as it did in the past, however, within some tribes it still does.

The Moko Style was part of the Maori Tribe. They believed that the head was the most sacred part of the body. All Maori that were highly ranked had tattoos. Tattooing was part of rituals for the Maori. Important events during a person's life can be tattooed on a tribe member's face. the more ink that is wore, the higher the rank. They were also believed to attract women as well. Maori tattoo designs have inspired a variety of different tattooing styles for centuries.

The Maori would use a bone chisel with a sharp straight edge. Deep cuts were made and then a chisel was dipped into a soot pigment. It was then tapped into the tattoo was eventually done. This was an extremely painful and long process for anyone to go through. These tattoos would be planned out prior to the event, such as it is usually done today. Women of the Maori were not subject to the extreme tattooing as men were, but they did get tattoos as well. The lips, nostrils, and chin were common areas for women to be marked.

Ancient Hawaiians also tattooed their bodies just like Polynesian groups did. Both men and women were tattooed with black ink that often covered most of their body. Native warriors and tribes were among them. Hawaiian tattoo designs can include Pacific symbols and elements.

Most Hawaiian tattooes today feature a wide variety of colors, although traditional tattooes with black ink can be found and are not uncommon. They also feature a wide variety of Polynesian styles and designs. Today, these tattoos are very colorful. Hawaiian flowers, Pacific flowers, Tiki designs, tribal designs, and landscapes are all popular designs.You can also find volcano designs and rain/fire designs. In Hawaii, the Tiki design is popular. It is also popular among all Pacific tattoos. In Hawaii, Kakau means tattoo. "Mana" is spiritual nature. 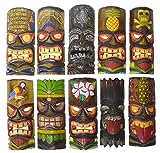