Serpentine is the common name of a group of green colored gemstones which are often passed off as Jade. Serpentine is the hydrated silicate of magnesium which is a green, yellow-green or blue-green in color with whitish cloudy patches. Several varieties of serpentines are found across the globe, the major types being Williamsite, Bowenite, Antigorite, Lizardite and Retinalite. These gemstones are often marketed as ‘New Jade’. Other names associated with this stone are 'Suzhou Jade' and 'Styrian Jade'. Antigorite is dark green in color and is also known as Noble Serpentine. Williamsite which is darker in color and having a very dark green hue and tiny black flecks is often presented as ‘Pennsylvania Jade' and Bowenite' is called ‘Korean Jade’. This gem is seen in a variety of colors ranging from Green, Black-Green, Brown-Red, Brown-Yellow and White. Lizardite is the finely grained variety of Serpantine which is also known as Orthoantigorite. Retinalite is the yellow to yellow green colored variety. Serpentine Gemstones seem of its name from the Latin word ‘serpentis’ meaning serpent rock as it resembles of its color and markings resembled the skin of snake. Serpentines are soft and only have a hardness of 2.5 to 5.5 on the Mohs scale with a monoclinic crystal structure. They are used for carvings as they can be easily carved and have a fibrous or greasy luster. Though it is not a hard stone it is widely used for making jewelry beads.

Apart from being used in gemstone jewelry, it is also used in many industrial applications such as brake linings and fireproof fabrics. It is said that the Romans used this stone as protection against sorcery and the dark arts. The 30th Chapter of the Egyptian Book of the Dead is said to be carved from a tablet of Serpentine. It is also mentioned in the Holy Bible as one of the stones on the Breastplate of Aaron.

Serpentine is also a good gemstone for the zodiac sign of Scorpio and Gemini. The Planet associated with this Stone is Saturn. Serpentine rocks are found in many places including New Zealand, India, Italy, Pakistan, China, Afghanistan, South Africa, Russia, Zimbabwe, Britain, Norway, England and the US. 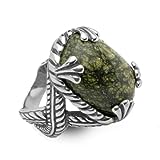 Serpentine Gemstones are widely used for healing purpose and is thought to protect an individual against the poison of snakes if worn as jewelry or carried in a pouch. They are also known to be useful in treating stomach complaints, cramps, diabetes, hypoglycemia, cardiac irregularities, bowel issues, kidney disorders and menstrual problems etc. It also is believed to balance female hormones and increase milk production in nursing mothers. It clears the chakras in the human body and opens the door for psychic abilities. Serpentines are known to correct mental and emotional imbalances helping one feel more in control of life. This stone is said to have a calming effect against nervousness and stress. It can help in balancing mood swings and bringing inner peace. This is an excellent stone for those who wish to start over as it helps in clearing the emotional baggage from the past relationships after a break up. It eliminates parasites within the body and aids in the absorption of calcium and magnesium. Serpentine is extremely cleansing and detoxifying for the body and blood. This stone helps to restore self-confidence and dispel fear. The gemstone is also said to promote good luck and confidence to the wearer. To dream of serpentine symbolizes that someone near you will do something treacherous.

Serpentines are Protective Stones and are associated with the Heart, Crown and Root Chakra. It is also an excellent stone for meditation spiritual pursuits.This stone is helpful in activating the kundalini (or serpent fire energies). By placing this stone on the Crown Chakra, it initiates the movement of kundalini energy up the spine. Serpentines are low hardness stones which can get easily scratched and damaged. It can also stain easily and is definitely not suitable for daily wear.