I had a black pearl once that I liked to just sit and view; it was the first black pearl I'd ever seen. A black star sapphire was also lovely, but I was clumsy with jewelry; it used to get caught in things somehow. But even more intriguing is the fact that the rivers of Tennessee are full of cultured pearls molded by the native Washboard Mollusk. How many know that Tennessee is the land of pearls?

Very likely, local Native Americans decorated their clothing river pearls in the past. 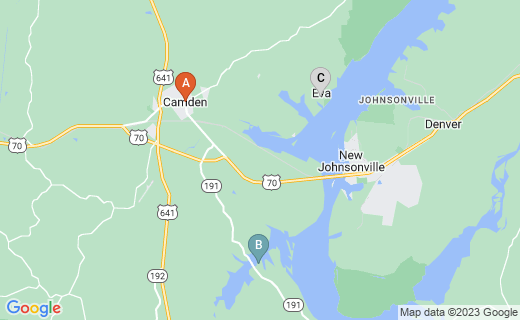 Tours of the Pearl Farm are expensive, but the museum and jewelry show room are free of charge to enjoy. The Tennessee River Folk Life Museum is very nearby in Eva and also contains specimens of mussel shells and an old pearling boat with its other exhibits.

These days, however, naturally occurring freshwater pearls are not usually found among the mollusks in the rivers. Mussels have declined in number as industrialization near rivers has increased killing off some of the native wildlife. In recent decades, a movement to raise mussels elsewhere and place them into the rivers has taken root, increasing the cleanliness of the waters and making them more habitable for many species.

The most prolific producer of cultured freshwater pearls in the area is located with the Freshwater Pearl Museum and Birdsong Marina in western Tennessee near the town of Camden. It's about 10 miles north of I-40, The National Road, and between a smaller town called Holladay and Camden on Route 191.

Tennessee River Freshwater Pearl Farm advertises itself as the only freshwater pearl culturing farm in America and that's quite a distinction. The majority of cultured pearls on the market are from Asian sources, notably Japan and more recently, the Persian Gulf. Camden, Tennessee is sadly well known for another distinction, that of the plane crash that killed country music star Patsy Cline and others in 1963, leaving Loretta Lynn without her beloved mentor. Further back in history, Camden was in the middle of the homelands of Ancient Native Americans in a culture designated Eva, also the name of a town at the spot on the Tennessee River.

The Eva Archaeological Site is dedicated to the honor of the Indigenous Peoples that lived in the area at least as far back as 5,000 BC. They likely used freshwater pearls for adornment, as did the Ohio Mound Builders., whose burial mounds have contained thousands of freshwater pearls taken from Southern Ohio Rivers.

Clear holes were punched into the Ohio pearls for beading and it is likely that the same measures were taken buy the native people indigenous to Eva and the surrounding land near the Tennessee River.

This pearl is recorded as the largest freshwater pearl ever seen and is a Tennessee River Pearl. Housed at the Smithsonian Institution like the Hope Diamond, the Survival Pearl is a baroque (irregularly shaped) variety of pearl that weighs 90.35 carats and is natural, not cultured. This means that no human inserted a small irritant into the mollusk that made the pearl around the speck of sand or mother of pearl placed into it.

What did enter this particular mollusk was a living snail and the pearl was formed around the intruder in a snail shape to protect the inside of the mollusk from harm. Thus the name Survival. Specialists at the Smithsonian feel that the mollusk lived for 50 to 70 years after the snail climbed into it, producing a large and rare pearl of a lavender-pink hue.

From the Smithsonian Institution:

"The lavender-pink and bronze colored Survival is an exceptional example of a freshwater pearl from the Tennessee River. The pearl takes its shape from the snail parasite that intruded inside the mussel and its name from the time it grew inside the shell, about 50–70 years."

Mussel Poaching In the 2000s

A black market mussel ring operated near the Tennessee River Freshwater Pearl Museum and Farm for several years ending in August 2006. At that time, after years if surveillance, 8 people were indicted by the US Federal Government through the Fish and Wildlife Service for poaching undersized mussels for sale to Japanese interests. Not only did this ring take business away from the officially state-recognized pearl farm, it harmed the environment and wildlife. Mussels help to keep the Tennessee River clean naturally by filtering the water through their bodies and poaching reduces the number of mussels in the river. The number is already reduced by human actions despite attempts to repopulate the mussels of several varieties by farm raising and replacement back into the wild.

The washboard mussel is one of the three most prized species for pearl cultivation. In the poaching case, the 8 indicted individuals (both men and women) removed 75,000 pounds of undersized washboard mussel shells valued at $230,000 or more, retail. Overall, officials estimated that $400,000 worth of mussels were exported to Japan over the course of two years. The replacement costs were estimated to be upwards of $1.8 Million.

Since the poaching ring was stopped, attempts to repopulate the Tennessee River and Tennessee Lake at Birdsong Resort have been more successful. The pearl farm at Birdsong Resort is a consistent success and open every day of the year. Partial proceeds from farm tours and showroom sales are likely aiding as reinvestments used for repopulating mussels that clean the local waterways and act as a food source for other species, attracting native wildlife back into the river and lake.