The Best Vintage Men's Seiko Watches of all Time

A Brief History of Seiko

Seiko began life in the Ginzo area of Tokyo, Japan, in 1881, when Kintarō Hattori opened a jewelry shop, where he also repaired clocks. He called the shop K.Hattori. By 1892, Hattori was producing his own clocks under the name Seikosha, which translates roughly as "House of Exquisite Workmanship".

In 1917, Hattori incorporated the company, and in 1983 renamed the company to Hattori Seiko Co. Ltd. Then, renamed again in 1990, to Seiko Corporation. Seiko reconstructed and created subsidiaries, and became a holdings company in 2001, then renamed itself yet again to Seiko Holdings Corp. in 2007.

Seiko watches have been worn by James Bond. Both Roger Moore and Sean Connery wore them, in North Sea Hijack, and Never Say Never Again. A Seiko dive watch was worn by Martin Sheen in Apocalypse Now. Arnold Schwarzenegger wore a Seiko H558 in several movies, like Commando and Predator. And Matt Damon wore a Seiko Chronograph in The Bourne Identity.

Seiko has a long and impressive history, and lots of watches along the way that are worthy of mention in this vintage men's Seiko watch list.

The Seiko Diver 6309-704x has a cushion shaped case, which, in itself is unique for Seiko. Only one other Seiko diver was ever made with this style case. It is stainless steel and measures approximately 45mm wide x 48mm long, with 22mm lug width. The case has a satin finish with the large crown at the 4 o'clock position, that is recessed for protection. The crown screws down for superior water resistance. The bezel is a bi-directional type, with 60 clicks. It is aluminum and has a matte black finish. The outer edge of the bezel has two rows of heavy knurling, giving a very positive surface to grip to. The original band was rubber, with a stainless steel buckle. The original part number for the band is GL831, if you are unable to find a watch with that band, you may have luck tracking one down, or one like it. They continue to make similar bands today.

The face of the 6309 if flat black, with over sized luminated hour markers. The 6 and 9 hourly markers are trapezoidal, and the 12 o'clock is a larger trapazoidal shape, split down the middle with a cross, that looks like a sword. The remaining hours are circular. The face also sports a Day/Date window, located at the 3 o'clock position. The hour and minute hands are wide and come to a fine point at their tips and are also luminated, and the second hand is thin and orange with a bulb near its tip, which also comes to a fine point.

It should be noted that there are two variations of the dial face. The first, from the Suwa, where the watches were made until 1980. The Suwa watch had a S above the 6 o'clock marker and the it also has text below the 6 o'clock marker that read 'Japan 6309-704L T'. After 1980, these will not show up on the watch, they were produced in Hong Kong for the remainder of the series run.

The 6309-704 movement is a 17 jewel automatic. These movements are well known for being some of the most durable movements around. It it not unheard of these watches never being serviced, and still running perfectly.

The watch is a wonderful piece of watchmaking, and would be a must have for any Seiko collector. At today's pricing, I would suspect you could find these ranging in price, anywhere from 300 to about 1000 dollars, depending on the conditions.

It is also important to point out, this watch is a highly replicated watch. Be careful for fakes, it would be a shame to be duped.

The Seiko Automatic Chronograph series 6139 is a series of watches full of timepieces well worth a look at from a collectors standpoint. It is arguably the first automatic chronograph to be available to the public. I say arguably, because Zenith and Chronomatic both released similar watches at the same time. The series began in 1969, and continued until 1979. The 6139 series did not have a running seconds hand. The central sweep seconds hand was for the chronograph function only, and it included a 30 minute chronograph sub dial.

It's important to note. That one of the things that have made this watch iconic, is the fact that Colonel William Pogue wore the watch during the Skylab 4 mission, into space, in 1973. Saying that he preferred the speed timer, over the Official Omega Speedmaster, to time the engine burns.

The stainless steel case is a barrel shape, common among Seiko watches, and measures 40mm in diameter, longer at the lugs. It has a screw on back. It sports a flush mount crown at the 3 o'clock position ant the chronograph function buttons at the 2 & 4 o'clock positions. The case has a couple of small variations, but one to consider when looking to purchase one of these watches is, the earliest models, 1969 and into 70 and perhaps 71, are notched at the crown, it makes these more desirable from a collectors standpoint. The wording on the case back also changed around the same time. The word "Waterproof" was replaced with "Water Resist" or "Water Resistant", due to government mandates. The Bezel is another feature on this watch that makes it easily identifiable. It was red and blue, and often referred to as the Pepsi bezel. It displays the tachymeter scale, and has a rotating inner bezel with markings for 60 minutes. The dials, of course are the most identifying feature of these watches. The yellow being the most popular, but also they were available in blue and silver. The dial markings themselves did vary over the years, but generally they were square hour markers, with the chronograph sub dial at the 6 o'clock position and the day/date window at the 3 o'clock position. The hour markers had luminations, as well as the hour and minute hands. There were a couple of variations on the band as well. The first was the H-link, stainless steel style, that tapered and had a folding safety clasp. There was also a Stelux version, which was often paired with the silver dial for some reason, and there was also a Japanese domestic market version.

The movement was an automatic chronograph, as we already know. There were two versions of this. The first was the 6139A and the second being the 6139B. The "B" version being the updated and more robust version. They had 17 jewels and ran at 21,600 vph. they had the 60 second sweep and 30 minute sub dial and a quickset day and date. They also had a power reserve of 45 hours.

The Pogue is really the holy grail of the series, and are truly the coolest watches in this bunch, but all the 6139's are fine watches, and something to be considered while looking for a watch to add to your collection. The Pogue is usually found for around 400 dollars, but that price can fluctuate depending on the condition. It is an iconic watch and one I would think would be well worth the investment for a person looking to add a Seiko to their collection or expand their existing Vintage Seiko collection. 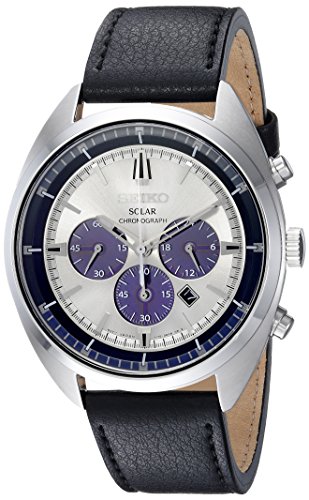 The 6138 was the successor of the 6139, it was released in 1970, the year after the 6139 was released. It was in production until 1979. Like the 6139, these too were automatic movements. Also, without a functional standard second hand, the 6138 had a small minutes chronograph sub dial and a small hours sub dial, and used the center sweeping second hand as the seconds for the chronograph.

In all, there were 10 models released under the 6138 series. All of them were basically the same watch, in many ways. Small changed did take place, there were two movements, the 6138A and 6138B. There were some color changes, and small shape changes, but other than that the watches were all about the same.

The 6138-8020 was nicknamed the Panda because of its coloring. IT has a white main dial face, with black sub dial faces, giving it the "panda" look. It was also available with a black main dial, but I don't see as many of those floating around.

There was also a "Baby Panda", which has smaller sub dials, giving it a smaller look than the Panda. Both watches are collectible and very nice, but there are two different watches, so just take care when purchasing.

The Panda has a 40mm stainless steel, barrel shaped case. It is longer at the lugs. The back is a screw in style, also made of stainless steel. It has a crown at the 3 o'clock position and has the chronograph function buttons at the 2 & 4 o'clock positions. There was a gold plated version as well, that was the one with the black dial, but they are fairly rare, and quite a bit less desirable. The Panda face is white, with a black outer tachymeter ring, and black sub dials, reasons for the panda nickname. It has long, dashed, polished steel hour markers. It has black hour and minute hands with lumination imbued in them, and luminated chronograph hands. The dial face also includes a Day/Date window at the 3 o'clock position. The original band was a 3-link, stainless steel band with a folding style clasp. And it came with a Hardlex lens.

The 6138B movement is a solid piece of timekeeping. A automatic chronograph movement with hand winding option. It was a 21 jewel movement, except for some Japanese Domestic models, they had 23 jewels. It rand at 21,600 vph, and it had a 45 hour power reserve. The 6138 movements are considered really fine movements, even though, at the time they would have been mid-market movements.

The Panda is really a great looking watch. Personally, it is one of my favorite Seiko's of all time. It looks well proportioned and is a good running watch. It will not be a cheap purchase. Depending on the condition, I would think you might spend 700 to 1000 dollars fairly easily, and possibly more in the current market.

I think any early model Grand Seiko is a must for any serious Seiko watch collector. They are impressive timepieces, and have been for a very long time. Seiko started producing Grand Seiko's in 1960. They continued the model line until 1975, where they tried to change directions, but by 1988 they reintroduced the line and the Grand Seiko line is continued today.

Personally, I love the looks of the 6146-8030, and that is the primary reason I have chosen that model for my best vintage men's Seiko watch list. It is a little outside the box, and that is probably why I dig them. The 6146-8030 is a 36,000 high beat model. It is really cool. If I had another choice it would be that one. These are some of the best vintage men's Seiko watches of all time.

Seiko has produced some of the Best Men's Watches I have ever seen. They have been making quality, well built, and reasonably priced timepieces for a very long time.