The Indian Custom Of Tonsuring-Why Do Indians Shave Their Heads

Bedecked Hair Of An Indian Bride

The Indian culture is vibrant with several customs being followed along the length and breadth of India. Tonsuring or shaving the head is one such custom. And there are many beliefs to support this according to one's religion and caste and sometimes the village they originate from. Hair is considered precious and one that frames your face giving you a beauty and an identity. Indian women sport long tresses and girls braid their hair while older,married women pin it up into buns. Women of all ages love to adorn their hair with fragrant and colourful flowers that are strung together on a thread. Today,women in Indian cities do not follow this to a T.They are independent and their men allow them to wear their hair in any style they want and are prepared to pay any amount for a good stylist at a reputed salon. But,that is only a small margin of women. The majority of young ladies still love long braided hair adorned with fancy hair clips,flowers,brooches-colours to match every outfit. Some love to sport a ponytail and some leave their hair loose. Girls and those yet to marry are always encouraged to grow their hair long so as to be able to have an elaborate hairdo for their wedding. Older women generally sport a bun which is considered more dignified and respectful.

Hair Style In The Time Of Gurukuls

In the olden days and the mythological stories, we read about the Gurukul system where a handful of young boys were left with a teacher(their Guru) either in the forest or the village to get their education from him.He would provide for them in addition to teaching them all they needed to know in the ways of this world and how to be warrior as well. In return they would do anything for him,and at the end of their study they were to give "Gurudakshina" or Fees. This would be anything that the Guru asked of the student. Now,these students were to shave their heads from the front and only until the top of their head.The hair on the top of their head could not be cut or shaved if the boy's father were alive. And this kind of hairstyle at once signified that he was a Brahmin(high caste). It is said that only such boys could be educated or become temple priests. The hair on the top of the head would be longer and would stick out of the middle of the shaven head and would be tied into a knot. While studying,it is said, that this portion of hair would be tied to something so that if he happened to doze off,it would wake him up to study again.

Shaving Of Heads In A Temple

Family And Friends Watch The Tonsure In Festive Mood 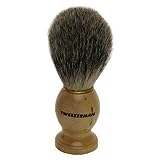 Why Do Indians Shave Their Heads?

Religious beliefs that have been followed over generations is at the heart of this most popular custom. Here are some instances when a person's head is shaved.

Hindus believe in rebirth,not necessarily as a human being,and so to attain liberation from this cycle of rebirth,such customs were enforced. Most often, the people themselves come forward for all these customs,as being seen clean shaven,they are then perceived as devout.

Shaving one's head is a symbol of total submission to God. As a sign of repentence,head is shaved in a temple of a particular deity,then the devotee bathes and stands bowed down in the presence of the deity,seeking forgiveness and offering to become a new person. Tonsuring is the outward symbol of beginning life anew. The most popular among Hindu temples for tonsuring is the one at Tirupathi in Andhra Pradesh where people from all over the world queue up right from early morning to late evening just to get a sight of the bejewelled deity in the sanctum sanctorum. This practise still exists and is very popular among Hindus from all over. There is even a separate queue for politicians,eminent industrialists and popular film stars. And it makes for front page news the next day.

Today,the people are not guided properly and come for a variety of reasons other than seeking God's absolution of their sins,to get themselves tonsured at a temple where barbers are an essential part of the temple as are pujaris(priests). Most come to offer their precious hair as an offering for favours received. An oath taken earlier,if and when it comes to pass,will be a sign that God has answered their prayers,and so the hair is offered as offering. In history and mythological books,we see characters cutting off a part of their body,whichever is most important for them,and giving to the deity. Today's reasons cited are as follows and quite often the whole family gets themselves tonsured.

This practise of shaving the head in a temple is not restricted to Hindus alone. Some Indian Christians and Muslims also practise this custom. Among churches,the Vellankanni church in Tamil Nadu is the most famous and seen as a sort of pilgrimage for Catholics.

Servants in olden days were often told to shave their heads and always look down at the floor while listening to their masters.

Widows were made to shave their head till about 40-50 years ago,the reason being after the husband dies,a woman loses her right to live. In marriage, husband and wife are one soul and so when the husband died,shaving the head of the wife was akin to being dead. In some sects,sati was performed,where the wife was made to sit on the funeral pyre of her dead husband and burnt. The belief was that both would then attain "moksha". This practise does not exist anymore. Today,widow remarriage is encouraged in addition to helping them become financially independent.

Lastly,when a man dies,his sons shave their head and light his funeral pyre as a belief that only then their father attains "moksha".

Not all reasons to go clean shaven are religious. It is said that hair grows very well once the head is clean shaven. And so, when a child reaches a year or a year and a half,the head is shaved and all baby hair gives way to super luxurious tresses. The barber is called home for the occasion and a feast is arranged for family and friends. Yes,for generations,even my family has gone through this ritual,because we are Indian Christians.

It is imperative to note that the Sikhs are the only Indians who are forbidden to ever cut their hair or trim their moustache or beard. They take great care of their long tresses,both men and women and the men wear an elaborate turban which characterizes them a Sardarji. The long moustache and beard is combed and a tight net is used to keep it in place.

Would You Go For The Bald Look?

I Am Part Of The Hubmob